Day 3 – Day-tripping to Stein Am Rhein and Rheinfalls

Another rainy day prediction goes down the drain. Thank you once again to the weatherman for getting it wrong. Sunny with a few clouds means we are heading out to explore.

Today we are heading north to visit the area near the German border. There are two gorgeous medieval towns – Stein Am Rhein and Schaffhausen and the largest waterfall in Europe – Rheinfalls.

We are literally a block away from the train station and using the SBB’s app, we found the train we wanted and headed over to the station. Once we arrived at our platform, we boarded the train and grabbed a seat. That’s it – no fuss, no muss.

Eventually the conductor came around, verified our passes and that was it. Such an easy way to travel. We decided to start in Stein Am Rhein, so our journey took a little over an hour.

Arriving at the train station in Stein Am Rhein, you walk about 800 meters to reach the old town. On the way there, you cross over a bridge and get your first view of the Rhein River. Along the banks are beautiful buildings that beckon you to the town that celebrated 1000 years of existence in 2007. 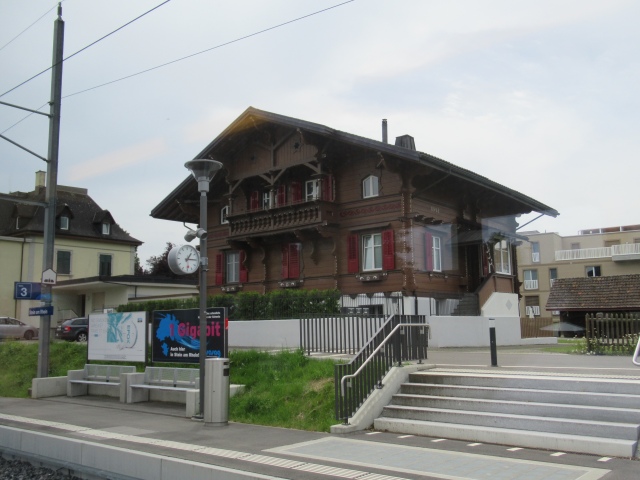 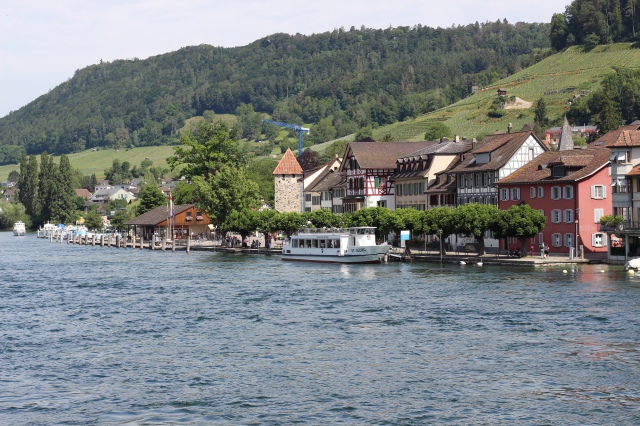 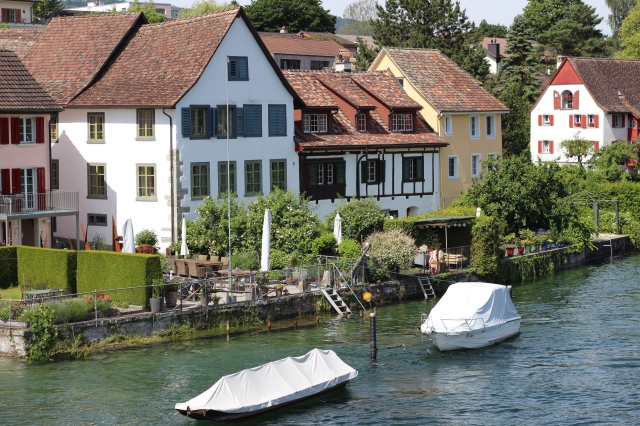 Most of the buildings are from the medieval period and there has been some rebuilding over the years due to fires and even some bomb damage during WWII.

The painted facades of the buildings are incredible. They really do give you a sense of the history you are walking through. Of course, gone are the blacksmith and stables, but now you can get gelato and buy souvenirs. 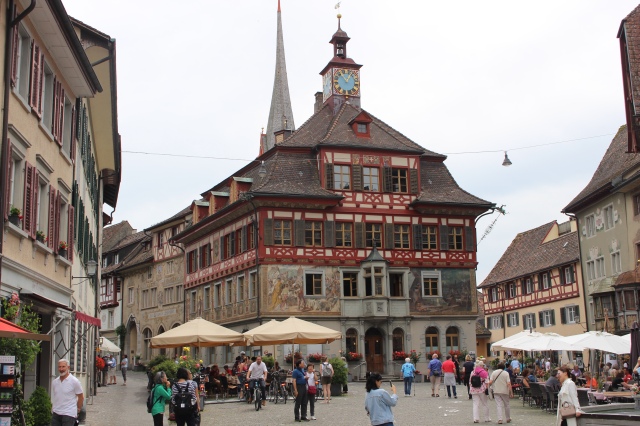 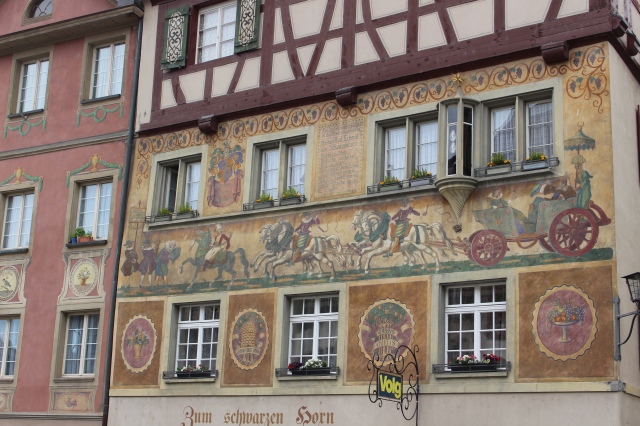 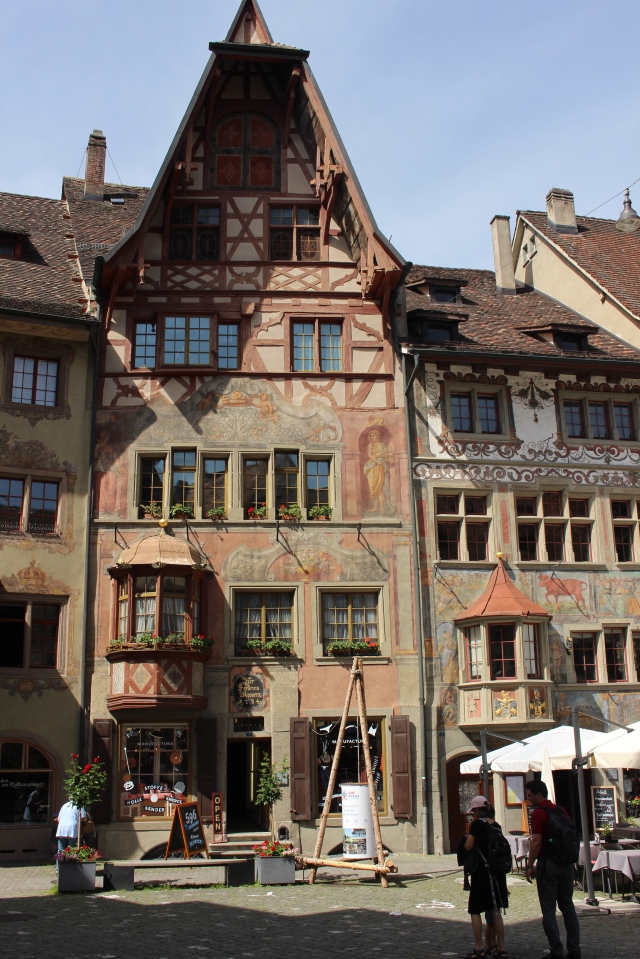 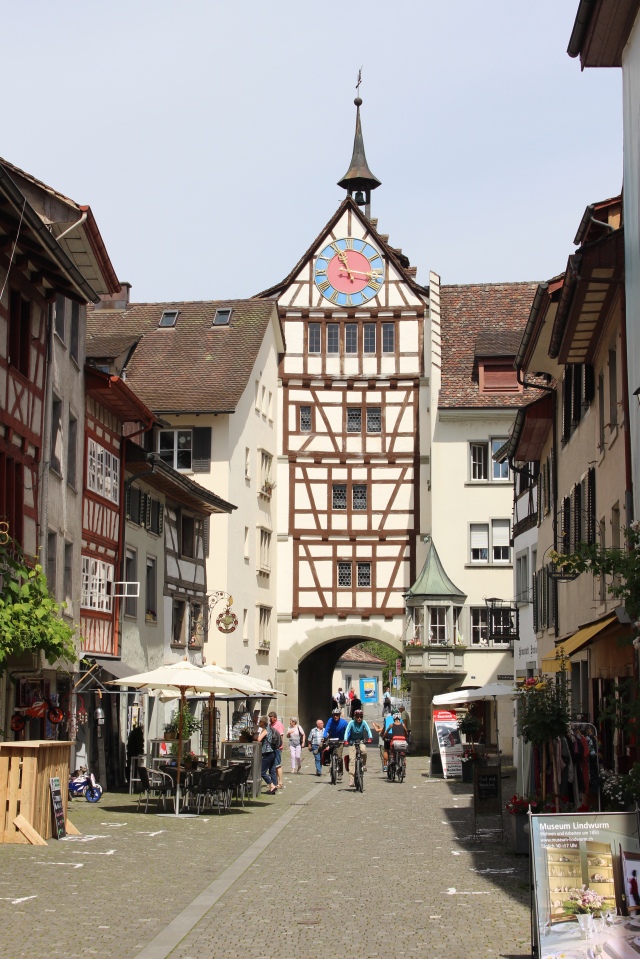 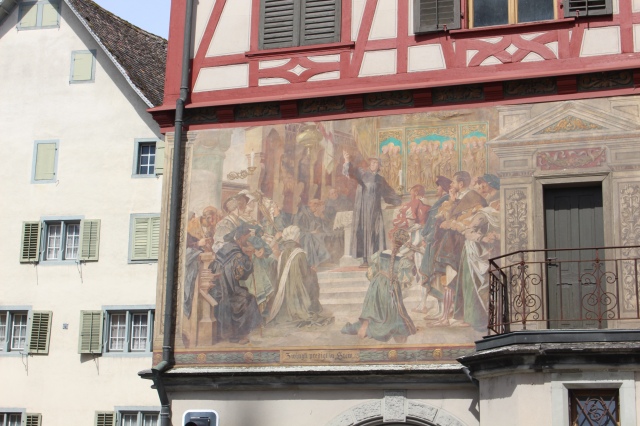 One of my favorite things to see are some of the old signs on the buildings. I’m told the signs were created because many people were not able to read, but could tell what the business was by the sign. I am gullible and that might just be a story, but I’m sticking with it. 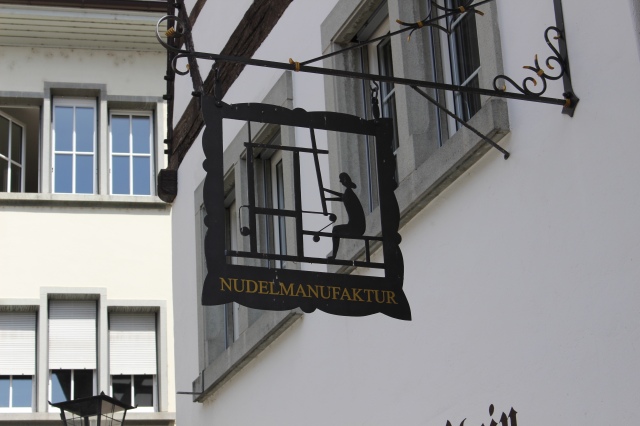 Our next stop will surprise nobody – lunch! We found a small restaurant called Restaurant Ilge and decided that the owner should be our next contestant on “Let’s Try German”. So I messed up the pronunciation, but we got a table for two in the shade, had two glasses of a delightful German Riesling and enjoyed our meals immensely. By the end of the meal, the Owner woman was even smiling – I call that a success.

Next on the agenda was a stop at the Rheinfalls. The Rheinfalls are considered Europe’s largest waterfall by volume. Us WNYers have Niagara Falls, so there might be some naysayers in the group, but by volume, the Rheinfalls were impressive. It’s also impressive as you can get within a couple feet of the falls and can really feel the power.

We met a wonderful older couple while trying to figure out the ticket machine. They were very friendly and thrilled that we were visiting their country for such a long time. They literally thanked us for being there. It was such a nice moment.

Then we pushed them into the water. Only kidding, they slipped.

We walked down to the falls area and truly were impressed. The couple suggested we take the ferry to cross and see the falls from the other side too. Looking at the boats struggling against the water, we opted to save that for “next time”. 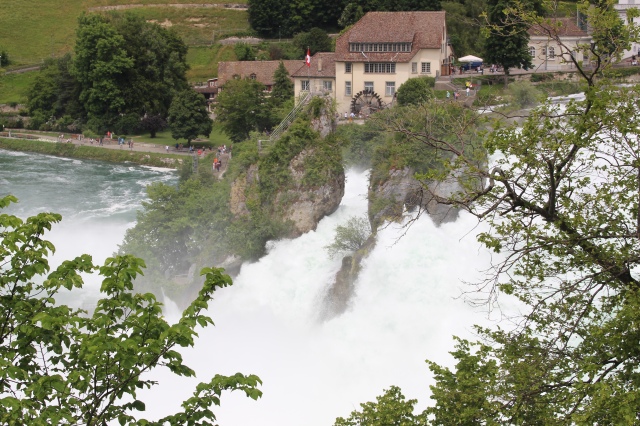 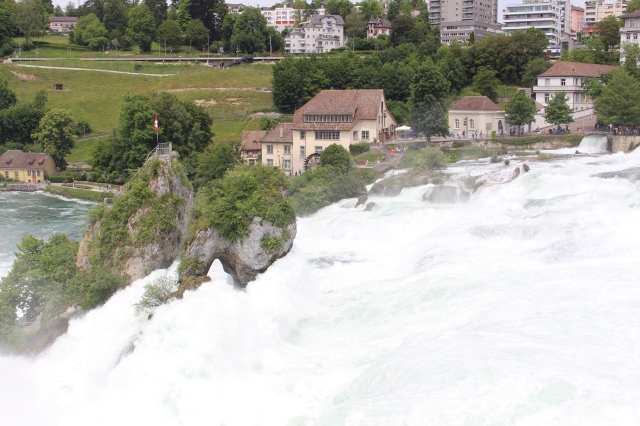 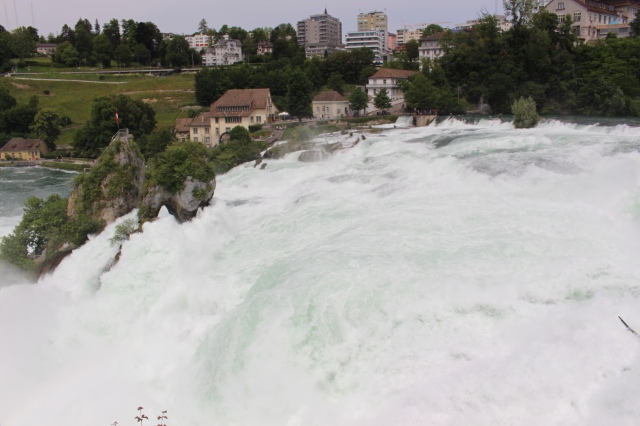 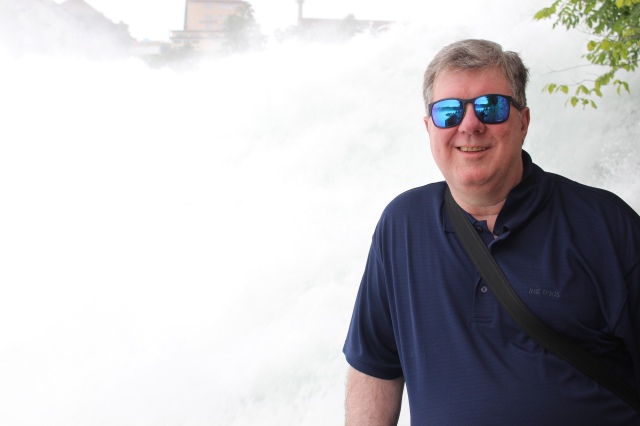 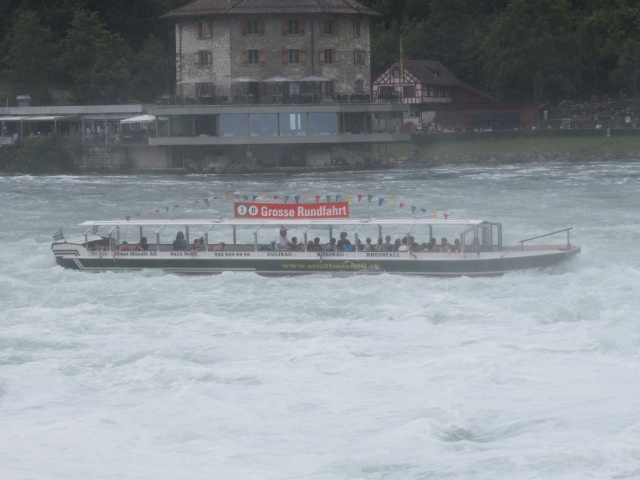 After admiring the area, we had to make the dreaded climb back to the top. That sort of put an end to the spring in my step, so we decided to skip Schaffhausen and head back to Zurich.

Our timing was perfect as we were able to catch a train right away and within 45 minutes we were back in the Zurich train station.

We grabbed a couple beverages to take back to the room and then settled in for a nap. Since neither of us were particularly hungry, we just chilled in the room and listened to a group of rowdy, drunk Spaniards out in the street late in the night. We also planned out a course of action, as the weatherman changed the forecast for tomorrow – no thunder boomers now until later in the day. I see another day trip in our future.

Like Loading...
This entry was posted in Switzerland and tagged History, Small Towns, Trains, Waterfalls. Bookmark the permalink.