The Royal Rajasthan on Wheels

Started off with breakfast before checking out of the hotel. We had a driver to take us around before we head to the train station.

Our first stops of the day were two Hindu temples and a Sikh Temple. The first of the Hindu temples was a smaller temple in the older part of Delhi. It’s a sad world we live in as we had to go through security screening before entering. Inside stations for various gods and goddesses were available for prayer and worship.

One must always remove their shoes before entering a temple.

The second temple was a larger one with a similar set up. There were multiple rooms in the temple for people to worship various gods and goddesses. In addition, there were holy men there to talk about the faith.

Outside, there were many poor people begging for money. Once someone gave them some money, others would flock to the person. It was really difficult to ignore the beggars as they were quite persistent, but you’re told not to give them money as it encourages people to continue and not work.

Our last stop was at a large, ornate Sikh temple. In addition to removing your shoes, you are also required to wear a head covering in the temple. Inside, people were being lead in prayer and worshipping towards an altar.

Once our spiritual journey was completed, the women needed to do some retail worshipping. Our driver took us to several shops to get good deals. The way it works is the drivers are connected to certain shops. They get a tip for bringing people to the stores and extra if people buy things.

We ended up at a jewelry store and two saree stores. The women were not pleased with any of the stores! So no purchases were made. It was a lot of driving around on a hot day with loads of traffic.

With no luck shopping, our next stop was the train station. Though we were early, it was exciting knowing what was to come. 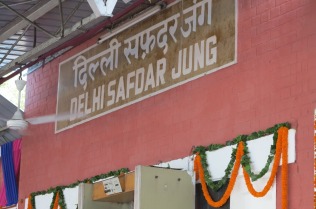 As time went by, others arrived and then so did the train. 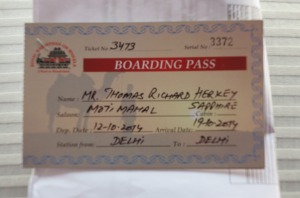 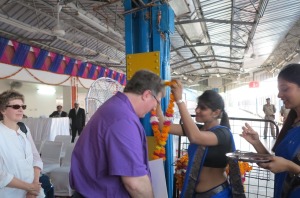 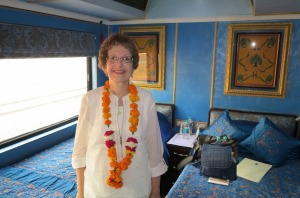 Our official welcome was a marking of the forehead and a long flower lei made from marigolds. There was music playing and everyone was excited for the journey.

We were given our car and cabin assignments and then led to our rooms.

We are in the car named the Moti Mahal and our room is the sapphire room. Like a sapphire, our room has a blue decor. There are two single beds, a small desk, a side chair, a locking clothing bureau and a nice sized bathroom. The room is very clean with two big windows to bring in plenty of light if desired.

We have two personal minders to care for our three couples. They make sure we get whatever we need and will make sure we are where we need to be at all times. Their names are Ram and Kesar and both seem very nice.

Once situated in our room, we were called by Prem to join them in the lounge car for a get together. Introductions were made and punch, wine and tea were available. The group is only about 30 people, 8 Malaysians, 8 Brits, 4 Caucasian Americans, 6 Indians and a few people we didn’t meet yet. Interesting mix.

During our little gathering, the train started off right at 5:30 pm. The excitement begins!

Dinner is at 7:30, so we have a little time to rest before being beckoned. The menu consists of many courses – both continental and Indian. The servers bring out each course and you can request it, sample it or pass it by.

Tonight, we started with a Cream of almond soup. Then a variety of salads and the continental choices, which were fish and chips, a pasta and a creamy vegetable casserole. Next came the Indian selections. Butter chicken in a curry, gobi aloo, Palak paneer, dal, naan and tandoori roti. Afterwards, dessert and beverages. It was a very good meal with lots of choices.

After dinner, we decided to call it a night. While we sleep, the train heads to our first destination – Jodhpur.

Like Loading...
This entry was posted in India and tagged New Delhi, Sites, Tour, Trains. Bookmark the permalink.