Day 3 – Ravenna and her mosaics

Saturday’s adventure was a day trip to Ravenna to see the Unesco World Heritage sites. The sites are mosaics dating back as far as the 5th century, when Ravenna was the capital of the Roman Empire.

The day started off easy enough. Up early, breakfast and then across the canal to the train station. We took a train to the town of Ferrara and then transferred to another train to get to Ravenna. Everything went smoothly and in no time we arrived. We made up a little sign with the name of our Tour guide – Manuela, so we could find each other easily.

Her train arrived and we easily connected. We found Manuela through ToursByLocals. They have tour guides available just about anywhere you would travel. Prices are reasonable too!

For our tour we chose a six hour tour of Ravenna. We visited the Unesco sites, which were mainly churches and a museum, then Dante’s tomb and Theodoric the Great’s mausaleum. Manuela provided us with a great history and art lesson and enough walking exercise to last a week. Yikes!

In addition to my narrative, I hope the pictures will give a glimpse of how marvelous the mosaics actually were. Keep in mind that the mosaics are made up of thousands of multi colored tiles and sometimes jewels. No paint, just stone fragments.

Our first stop was at an Arian Baptistery which dated back to around 525 AD. The Arians were a Christian sect that stressed the human side of Jesus rather than the divine side. The mosaics show Jesus being baptized by John the Baptist. The unique quality of this mosaic is it shows Jesus’ partially obscured genitalia – which is never seen in Roman catholic images. The Arians were eventually branded as heretics and wiped out by the Roman emperor Justinian.

Continuing on our journey, we headed to the Church of San Francesco. Just before reaching the church, we pass by the tomb of Dante.

As you may remember, Dante was famous for writing The Divine Comedy. Unfortunately, Dante fell out of favor in Florence for his political beliefs and lived out his life in Ravenna. Posthumously, Florence forgave the now famous poet, and wanted to bring his bones back to Florence. Ravenna said “No” and hid the bones inside the walls of the San Francesco monastery.  They stayed there for three centuries before being rediscovered and placed in the tomb. 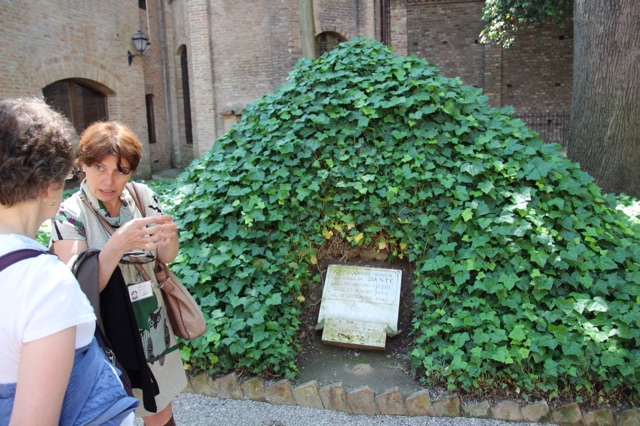 There is also a burial mound in a small cemetery where the bones were buried during WWII to protect them.

We made a quick stop at the Church of San Francesco.  Over the years it has sunk and its tiled floor has been submerged by the ground water.  There are now fish that swim there and I guess they get to enjoy the mosaics too!

Floor mosaic and fish at the Basilica of San Francesco

Next up was the Basilica di San Vitale. It’s 540 AD, Rome has been looted by barbarians and Justinian is emperor of the eastern Roman empire. Ravenna is now the capital of the empire under Justinian with close ties to Constantinople. The mosaics portray Justinian as the leader of the church and the state. On the opposite wall was his wife Theodora with her entourage. Theodora was a “dancer” who became Justinian’s wife and then empress. Make’s me wonder if during our youthful days of going to the Canadian ballet, if we had seen a future empress? 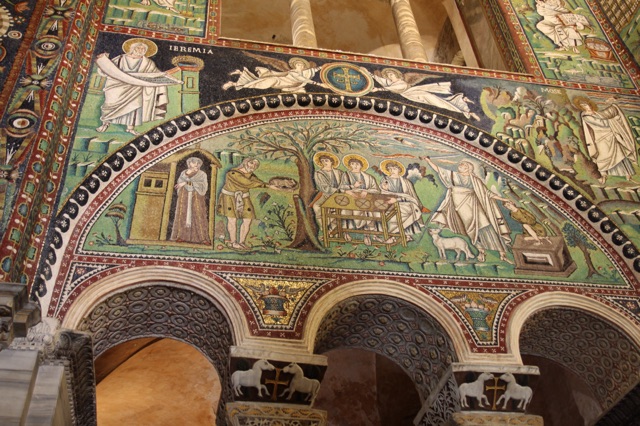 Next was the Mausoleum of Galla Placidia. It is a small, humble looking building that contains the oldest and most precious mosaics. They are 95% original and absolutely beautiful. One interesting aspect of the mausoleum is that Galla Placidia is not buried there. She died in Rome and was buried there.

Next came the Neonian Baptistery and the Archbishop’s museum. Besides the mosaics, the museum, which has been re-purposed, contains the small chapel of Sant’Andrea and an ivory chair that was used by the bishop when attending mass. 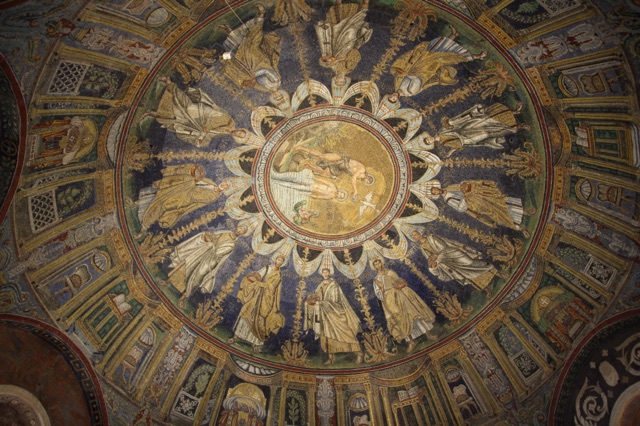 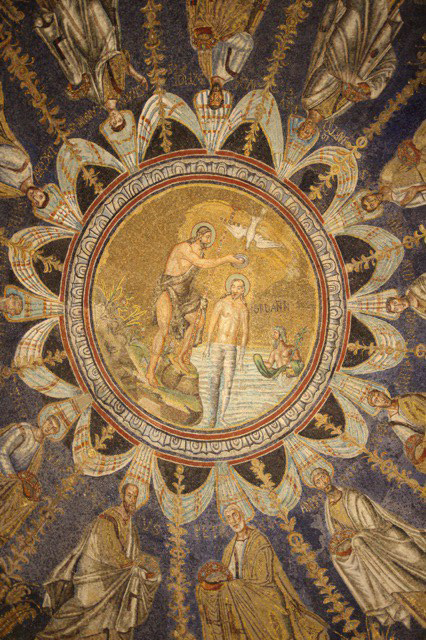 Sant’Apollinare Nuovo was our final mosaic stop. It’s a beautiful 6th century church that features mosaics that show a procession of haloed virgins on one side bringing gifts to the Madonna and Christ child. On the opposite side, Christ is on his throne with four angels awaiting a procession of 26 martyrs. Visually stunning and made even better with glints of sunshine reflecting off some of the pieces. 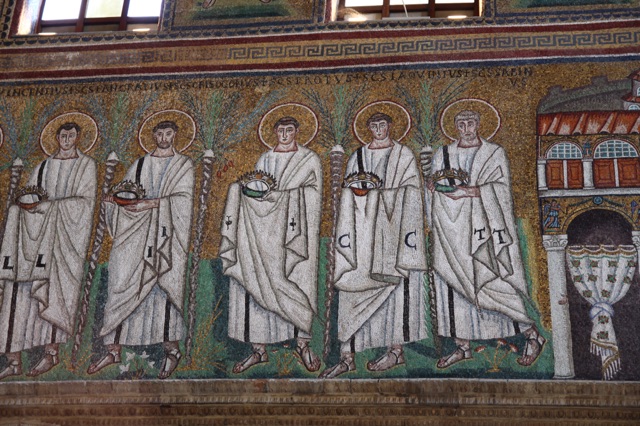 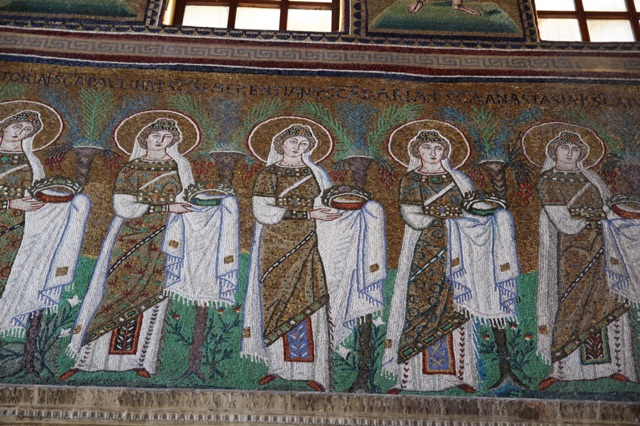 Since Manuela thought we were good walkers, we finished off by taking a long, hot walk to see the Mausoleum of Theodoric. After the beautiful mosaics and artworks, this was a little less interesting. It was just a large stone structure – not ornate at all.

At this point we said our goodbyes to Manuela and had a little time to rest up before our train arrived. Nothing says rest in Italy like some Gelato, and we just so happened to be standing in front of a geleateria. Such luck!

Our train arrived about 15 minutes late, but we were back on the tracks to Ferrara. Arriving, we noticed our connecting train to Venice was already gone. Ruh – roh!

Luckily, there was another train in two hours so we’d just grab a little something to eat and find a happy place to sit. If anyone tells you that the best place to be at night is the train station, you can tell them you know someone who disagrees.

Night train people on Platform 4 in Ferrara are the people that weird songs are written about. We were waiting with people who pace back and forth while arguing loudly on their phones, people who were talking to themselves and an assortment of others who we normally don’t hang with. When the train finally arrived, we were very happy to be on our way back to Venice.

We finally got back to the hotel a little before midnight. The worst part was we didn’t get our evening prosecco.

Like Loading...
This entry was posted in Italy and tagged Art, History, Mosaics, Ravenna, Tour, UNESCO, Venice. Bookmark the permalink.