The Beauty of Mont Saint-Michel

Woke up feeling refreshed and excited, as today we are heading to Mont Saint-Michel.  I have seen pictures and read about the Mont for years and today the pictures turn to reality.

Getting there from Pontorson is easy.  They have a shuttle bus that runs back and forth between the Mont and the train station.  It runs regularly during the day and evening and coordinates with the train schedule.  I guess that makes it easy for the day trippers too!  No gouging on price either – it’s €2.80 each way per person.  The ride takes about 20 minutes and the bus drops you off just about 150 meters from the entrance and picks you up in the same place – very convenient.

Laugh if you will, but the first glimpse of the Mont is magical.  It hardly seems like a real place.

Mont Saint-Michel rising from the sea

When we arrived, the skies were grey and the tide was already retreating from around the Mont.  It is amazing to me that when the tides are low, the water completely leaves the bay.  It goes from being an island to a rocky mass jutting from the muck.

Approaching from the causeway, it’s really special as it grows before your eyes.  Once off the bus, everyone automatically reaches for their cameras and crowds the railing to get their iconic first shot.  Sort of like this:

If you notice on the above picture, the tide is already pulling out leaving just shallow puddles around the ramparts.  Later in the day, people will actually be walking out on the drying sea floor.

It’s just a short walk to get to the gates and to begin your exploration.  The views change as you approach and get different angles of the structures. 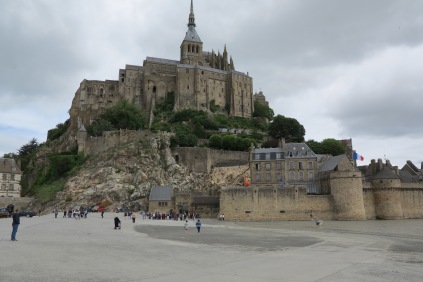 Once inside, it gets a little bit crowded.  The narrow, inclined walkways and abundance of stairs can test one’s patience if you aren’t prepared to deal with the people using them.  For instance, you might question why someone would be blocking the way with a stroller, and then be even more confused when there is no baby in the stroller, just a dog.

Anyway, the first part of the walk is hotels, restaurants, souvenir shops and the ramparts, which you can merrily enjoy for free.  The second part is the Abbaye, chapels and cloister; there is a fee of €10 each and you can also get an audio guide for a small additional fee.

Lots of people were catching their breath after the climb to the Abbaye.  I don’t know how many steps there were, so I’ll just guess – Lots!

Heading up to the Abbey

On the way to the Abbey

Our first stop was in the chapel where there was a Mass taking place.  We stayed and participated until the end of the Mass, which was a lovely experience.

Afterwards, we ventured into some of the other chapels, crypts and halls until we came to the Cloister.  Such a beautiful and tranquil area.  Keep in mind that the church and abbey have been around in part from the 700’s.  While the use of the structures has changed throughout the centuries, it’s interesting to see the efforts that have kept it intact. 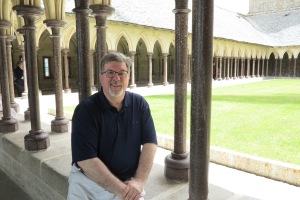 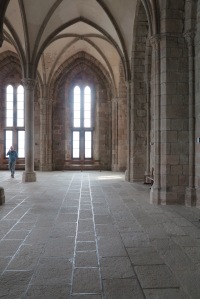 As our tour came to an end and we started down from the Abbey, the wind picked up a little bit and it started to rain.  Luckily we both had jackets, so we stayed dry, but we also had a bit of a wait until the bus returned.

We opted to grab a quick sandwich and drink and to sit under cover for a little while.  Needless to say, it doesn’t take long to eat a sandwich.  In that time, the clouds blew by and the sun came out and the skies turned blue.  When that happened, the views became incredible. 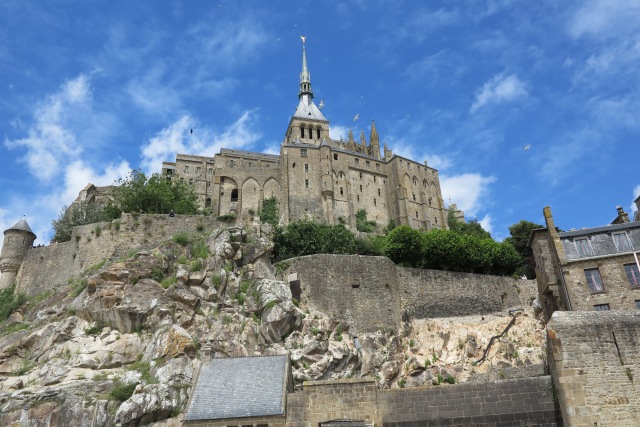 Soon after we took our pictures, the wind picked back up and more clouds rolled in.  The bus arrived and we were headed back to Pontorson. 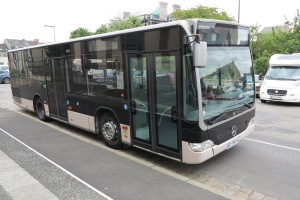 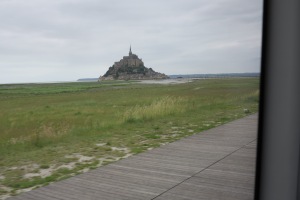 We arrived back at town and the Medieval Festival was still going strong.  There were more people strolling along, but the cooler weather was not helping at all.  Still, people were enjoying themselves and that’s the important thing. 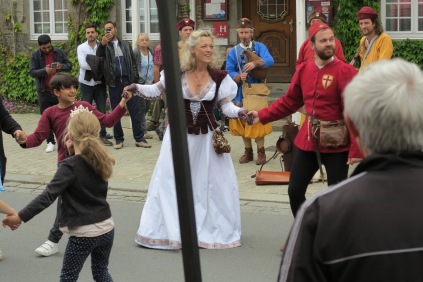 To my bowling buddies:  on the chance that my bowling career is over, I may have found something a little easier on the back – Medieval Bowling! 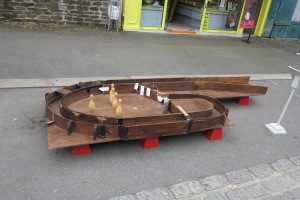 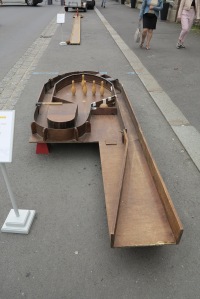 Back to the hotel to clean up before dinner.  We enjoyed it so much, that we are returning to Le Relais Gascon and the wonderful Isabelle.  She was too nice not to visit again.

We had 8:00 pm reservations and good thing, as there was a full house tonight.  It would have been more difficult to just do a walk up.  The two-day festival was tiring, so Isabelle’s jester outfit was gone, but the blue hair remained.  Mind you, we believe she was grandma to the younger folks working there and probably mama to the folks doing the cooking.  We ordered a bottle of red wine from Saumur, which went perfect with our duck confit.  I also had a salad with grilled anchovies that was delicious.  Throw on a bit of dessert, especially my profiteroles and you get two happily sated people.

A slow walk back to the hotel and another day was complete.  Just a little relaxation before heading off to sleep.

Like Loading...
This entry was posted in France and tagged History, Mont-Saint-Michel, Sites, UNESCO. Bookmark the permalink.

2 Responses to The Beauty of Mont Saint-Michel