Quick trip to the Big Apple

Just a little three day jaunt to NYC for a little fun.  We’re going to take in two Yankees games – Tuesday night and Wednesday afternoon – against the Baltimore Orioles.  In addition, Sue and our friend Donna are going to the Downton Abbey exhibition. I’ll join the festivities afterwards and get a chance to visit with Donna during lunch.

Just so happens that it is Restaurant Week in NYC.  They must use a different calendar here as their “week” goes from July 23 – Aug 6.  The deal is $26 lunch specials and $42 dinner specials – too bad ‘Per Se’ doesn’t participate!

We flew on JetBlue to JFK.  I love when we can catch one of their fare specials; it makes flying to NYC much more cost efficient.  The flight was just an hour – I swear we travel farther taxiing around the airport than up in the air.  JFK was busy, but not over the top.  We were able to catch a cab without a wait and were on our way to the hotel.  The fare to  Manhattan is a flat rate of $52 plus tolls and tip, so figure about $70.

We are staying at the Hotel Belleclaire on W 77th St.  It’s a nice hotel located just two blocks from the W 79th St. subway station (see, I can still do math).  That will make it easy to get to the exhibition and to Yankee Stadium.  It was built in 1903 and even with numerous updates, has retained many of the old design features. 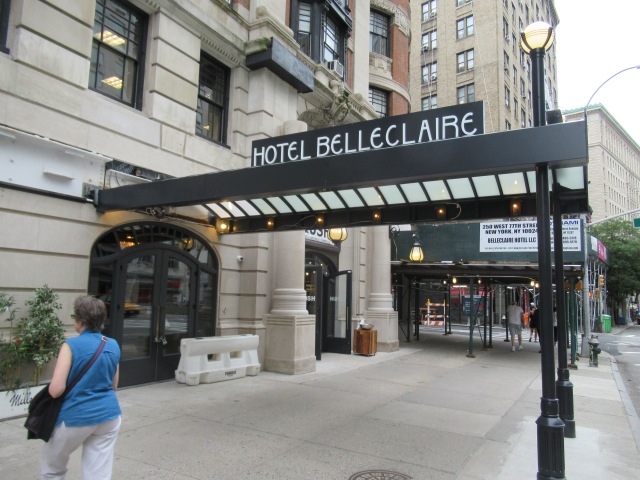 We had dinner at a restaurant called “Tessa” that is located just a short walk from the hotel on Amsterdam Ave.  Good thing it was close, as it started to rain just as we were arriving.  Their cuisine is considered modern mediterranean and I must say that our meals were delicious.  On top of great food, the prices were reasonable, especially in NYC.  Our one little complaint was that it was on the noisy side.  The wood and brick interior looked nice, but bounced the sound around.

The rain stopped by the time we were finished, so we were able to stroll back to the hotel with full tummies.

With thoughts of the fun day ahead, we headed to bed for a good night’s sleep.  The bed was comfortable, lots of pillows and just enough ambient light from Broadway to act as a night light.  It would have been perfect except for that one firetruck that decided to blast the siren as it was going by.  It startled us both awake, but we did fall back asleep.

We had a fun-filled first day planned.  Our first stop today would be the Downton Abbey Exhibit.  We caught the subway and headed down to Columbus Circle.  From there, it was just a short walk to 57th St, where we would meet up with our friend Donna.  Yes, she and Sue would be attending the exhibit while I took a little walk and relaxed in a nice shady courtyard.  They spent two hours wandering through “Highclere Castle”. 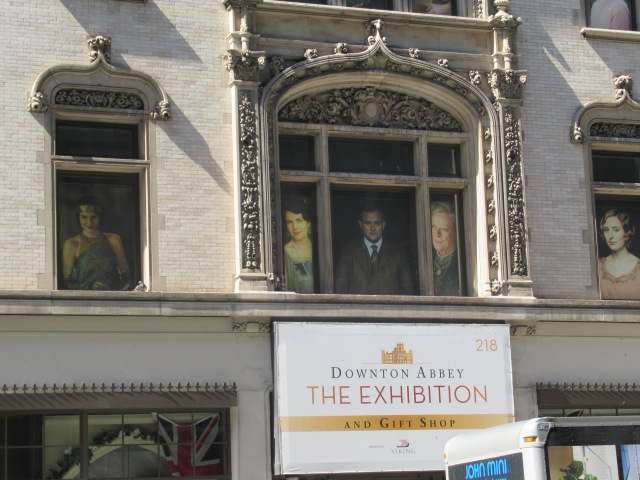 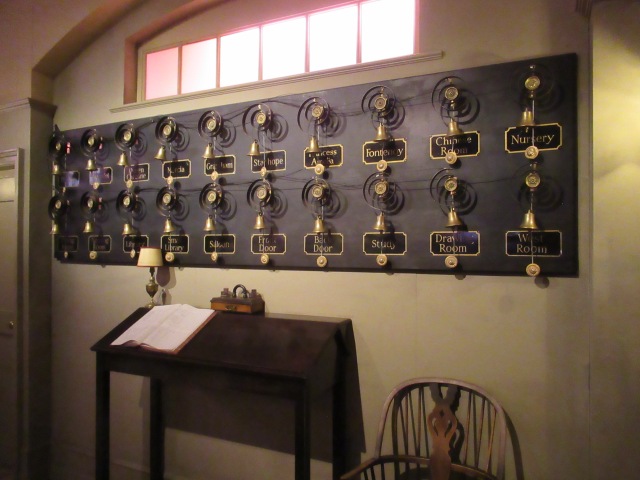 Meanwhile, I answered the age old question: “How do you get to Carnegie Hall?”.

The answer, of course, is – right on Broadway, left on 57th St. – who needs practice?

We met back up and the girls were thrilled with their visit to “Highclere”.  If you’re a fan and it comes near you, they recommend it.

We stopped at a little diner for lunch and lots of chatting.  It’s always fun getting together with friends who otherwise become just a voice on the phone.  After a while it was hugs and kisses and then off we went.  Part two of the day was the Yankees game.

We changed into our baseball game clothes and then off we went to the stadium.  The subway was packed with other fans and the ride went by fairly quickly.  “161st Street / Yankee Stadium” came across the intercom and the mass exodus from the subway began.    I would guess it is similar to what a lemming feels like when running with all its friends. Luckily, there was no cliff – just the stadium gates. 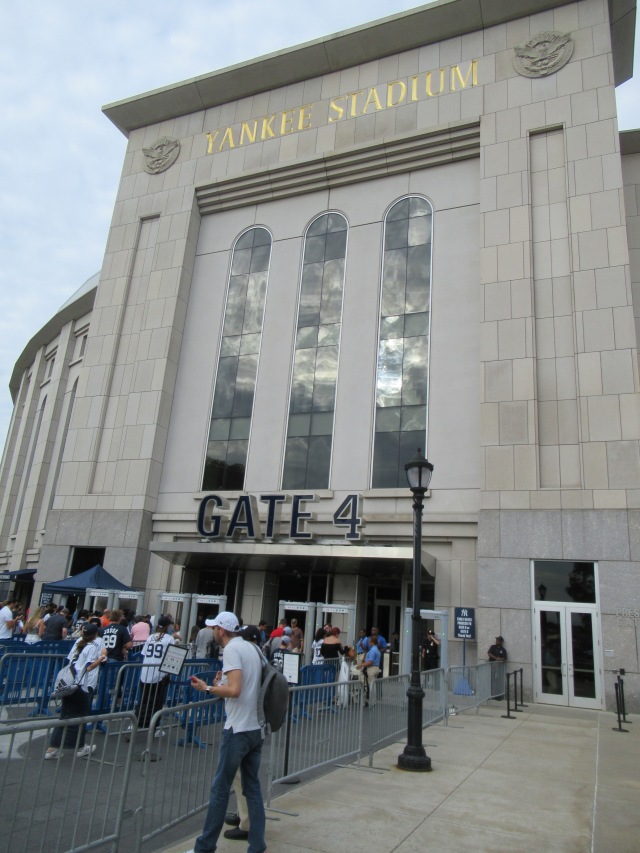 So, as a birthday treat for Sue, we have tickets in Section 121B.  They are between home plate and the visitors’ dugout and 11 rows from the field.  Truth be told, they were awesome seats!  The tickets include entry into the MVP lounge, so we were able to get free snacks and non-adult beverages to enjoy during the game. 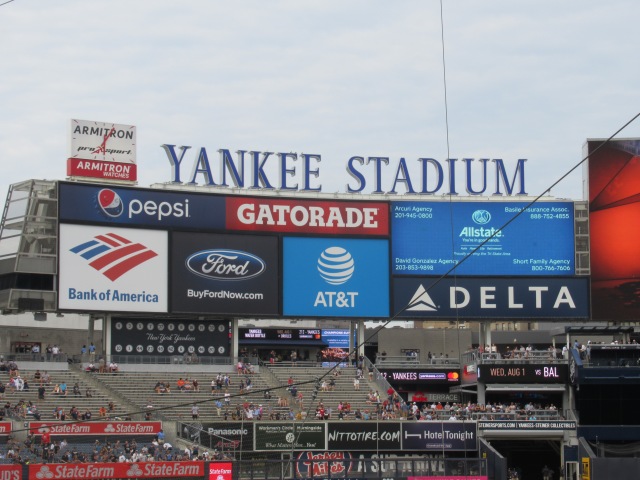 It was a beautiful night for baseball and we got to see Tanaka pitch and Chapman come in for relief.  Unfortunately, Aaron Judge and Gary Sanchez are out injured, but it was still a fun time and the Yankees won 6 – 3. 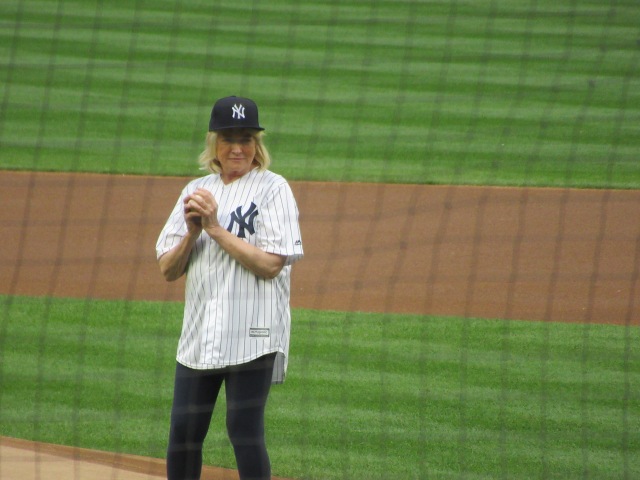 Masahiro Tanaka on the mound

Gardner at the plate 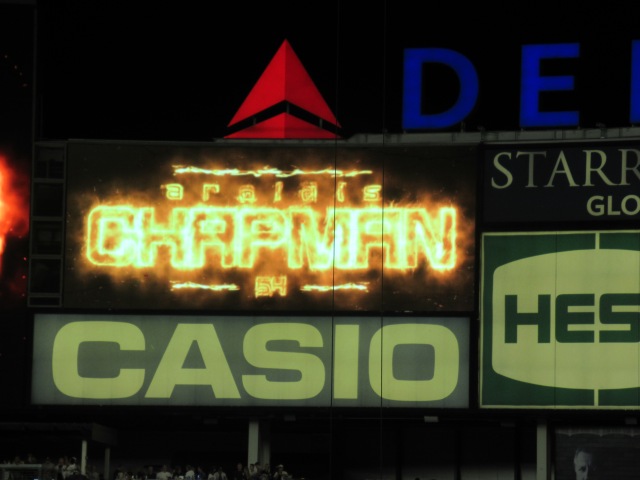 Back to the subway and then back to the hotel.  We cleaned up and watched the highlights on Sportscenter before hitting the sack.

Another good night’s rest ushered in day two.  Today we had our afternoon game.  We grabbed a quick breakfast and then headed off to the game.  While yesterday we got to see Donna, today we would get to catch up with George at the game.

The omens were all about and we just overlooked them.  First of all, it was hot and humid -the kind of day where you begin to sweat when you’re just standing still.  We arrived at the train station and my pass didn’t open the gate the first time, so a second swipe was needed to get in.  Then the train was halted before reaching our station, so we had to get a ticket from the counter and walk down to the next station.

We were directed to a train, but instead of being the local, it was the express that took us all the way down to Times Square.  So we had to switch and take another train back up to Columbus Circle and then switch to the Yankee stadium train.  When we finally arrived, already drenched in sweat, the clouds were looking ominous.

Once the game did start, Sonny Gray was also having an off day.  The fans were brutally letting him know they were not pleased with his pitching performance.  By the time the rains came pouring down, the Yanks were already losing 7 – 1.

And it didn’t rain, it poured – buckets.  The one bright light is we had the same tickets as yesterday, so we were able to head into the lounge and keep dry, well hydrated and well fed until the rain stopped.  I think everybody was hoping the rain wouldn’t stop so the nasty score would be washed away too!

In the lounge watching the rain on TV

Everyone who could get in did so.

When the rain did stop, the game did resume with the sun shining.  Though the Yankees held the Orioles scoreless the remainder of the game, they couldn’t catch up and lost the  game 7 – 5.  On the plus side, the trek back to the hotel was a little easier since so many people left the game early.

Back to the game

We exited the subway at the Museum of Natural History on 81st St and Central Park West and walked back to the hotel from there.  It was a nice walk with beautiful houses and a small park / playground and not much traffic noise.

We couldn’t wait to get back to take a refreshing shower and relax a little before dinner.  We had to pass up a dinner invitation from George to the iconic F and J Pine Restaurant as we already had dinner reservations.  But we’re calling in a raincheck for next time!

We lazily got ourselves ready for dinner.  We had reservations at ‘Cesca on Amsterdam Ave.  Unfortunately, the hot sun and humidity from the day had left us both drained, so the highlight of the evening was getting back to the hotel and relaxing before falling asleep.  This “getting old” stuff is rough!

We both woke up feeling refreshed and ready to head back home.  The hotel arranged for a driver and for an all-inclusive $75 we had a nice relaxing ride to the airport.  Our driver was really awesome.  Besides being an excellent driver, he was very personable and also pointed out sights and provided background info on the neighborhoods and areas we passed through.

Now here is the fun part: we arrived at JFK feeling good after that very pleasant ride.  We walked in and it was fairly crowded. However, we had checked-in online, so we could go right to security and to the gate.  We noticed that the side for TSA pre-check was nearly empty, so we walked over expecting to be re-routed to the other line.

We stopped at the empty JetBlue kiosk and printed off boarding passes just to make things easier and then walked into the empty maze right up to the waiting TSA agent.  He reviewed our paperwork and pointed us to the empty security gate.  It took me longer to get the wallet and phone out of my pocket than it did to get through security.

Incredible!  We assumed we would need extra time since it was JFK and instead, we were in and through to our gate in less than fifteen minutes.

We were able to get a good sandwich for lunch and still had time to read before boarding time.  We were delayed by a few minutes before take-off due to the menacing weather moving in, but we were back home in Buffalo only ten minutes later than scheduled.  All in all, it was an easy travel home.

Like Loading...
This entry was posted in United States and tagged Baseball, Exhibit, Flights, Hotels, NYC. Bookmark the permalink.

3 Responses to Quick trip to the Big Apple