Day 1 – We have arrived in Zurich!

Travels went great and we have arrived in Zurich. Kudos to both JetBlue and Swiss Air for terrific flights and on-time service. Special shout out to Swiss Air for not only great flights, but for the wonderful cabin staff and delicious meals.

For a large European city, Zurich’s airport is not huge. From what I read, the train station is the central travel point with the most traffic in all of Europe. The only delay we had was the line to get through passport control as three planes landed within a few minutes of each other. That said, the delay was not long and soon we found ourselves making our first Swiss transaction – buying train tickets.

We have Swiss Travel passes that we have starting on our second full day in Switzerland, so we needed to buy tickets to get to the central station, known as Zurich HB from the airport. It’s a 10 minute ride and the cost is 6.80 CHF (Swiss francs), however the ticket machine and I did not see eye to eye at first. I knew that when the total came to 123.00 CHF. So after switching ticket machines, we were able to purchase the tickets at the right cost and head off to Zurich. I do wonder where we would have ended up with the first tickets though.

Our hotel, the Hotel St Gotthard, is just two blocks up the street and is a wonderful old building dating back to the 1890’s. Our room is on the fourth floor overlooking the Main Street and it is just what we wanted. It’s spacious, has a very comfortable bed, nice shower and a reasonable price. What else does one need? 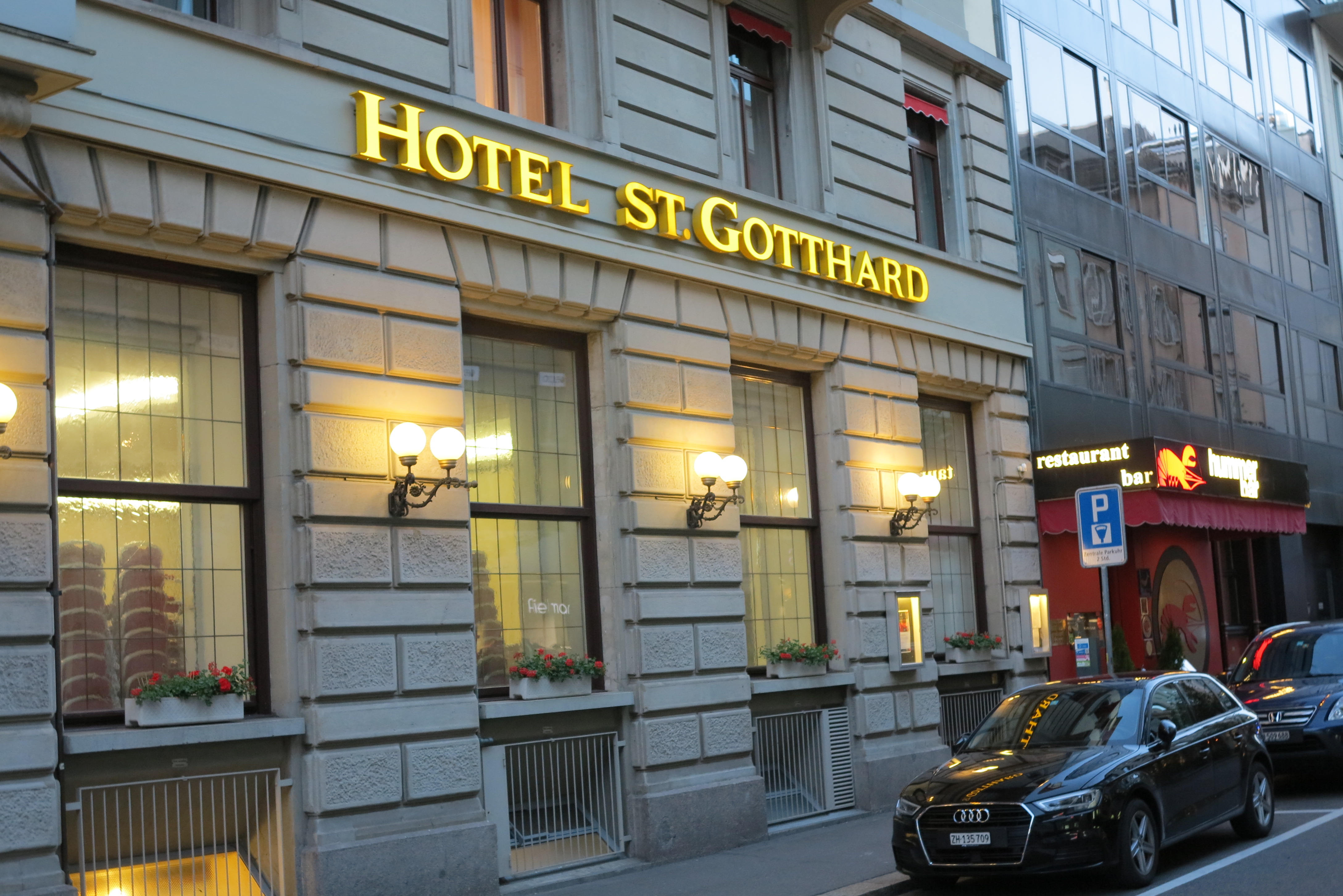 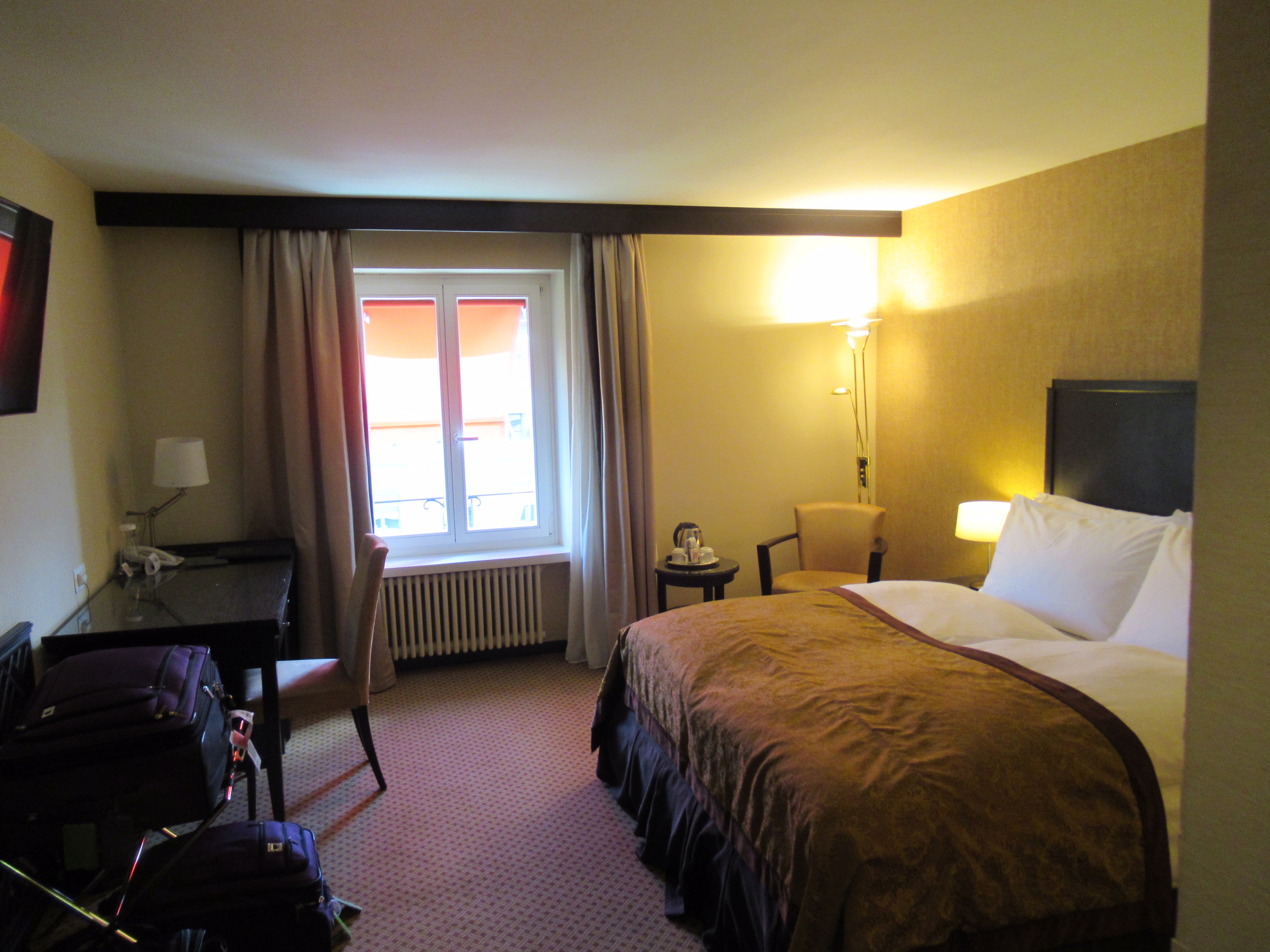 We’ll be here for five nights and we’re starting off on the right foot.

We were able to check in early and we both decided that a nap would do us good before dinner. It did!

Dinner tonight was at the Restaurant Haus Zum Ruden. I had been going back and forth with the owner to secure a reservation. While we initially wanted to go tomorrow, we were very happy that they could take us tonight. 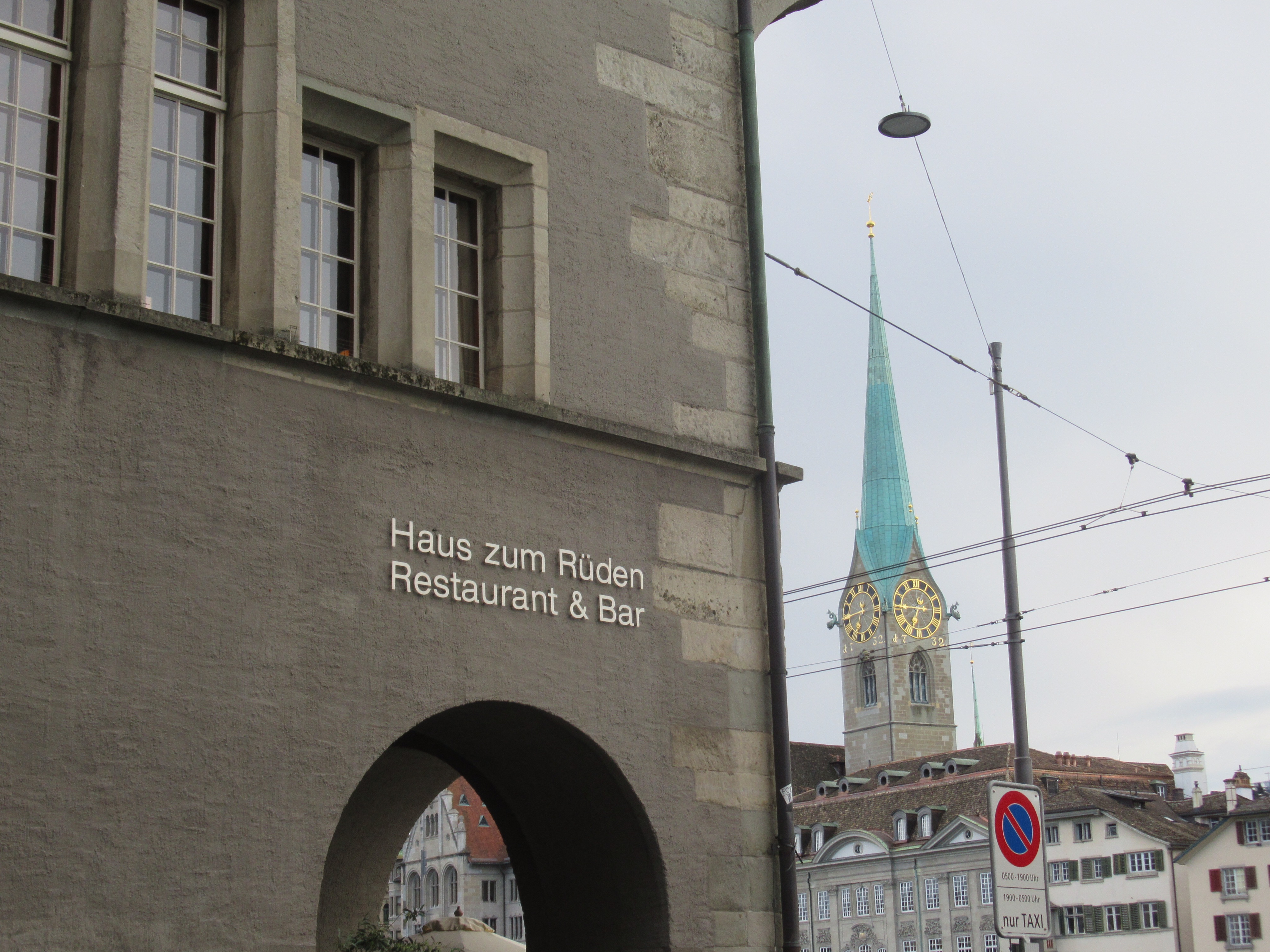 The restaurant came highly recommended by some of my online travel friends and we were not disappointed. The restaurant has two separate spaces – one on the ground level that is a more casual bistro and another in what they call the “Gothic Hall”, which is the more upscale restaurant. We ate in the Gothic Hall and couldn’t have been happier. 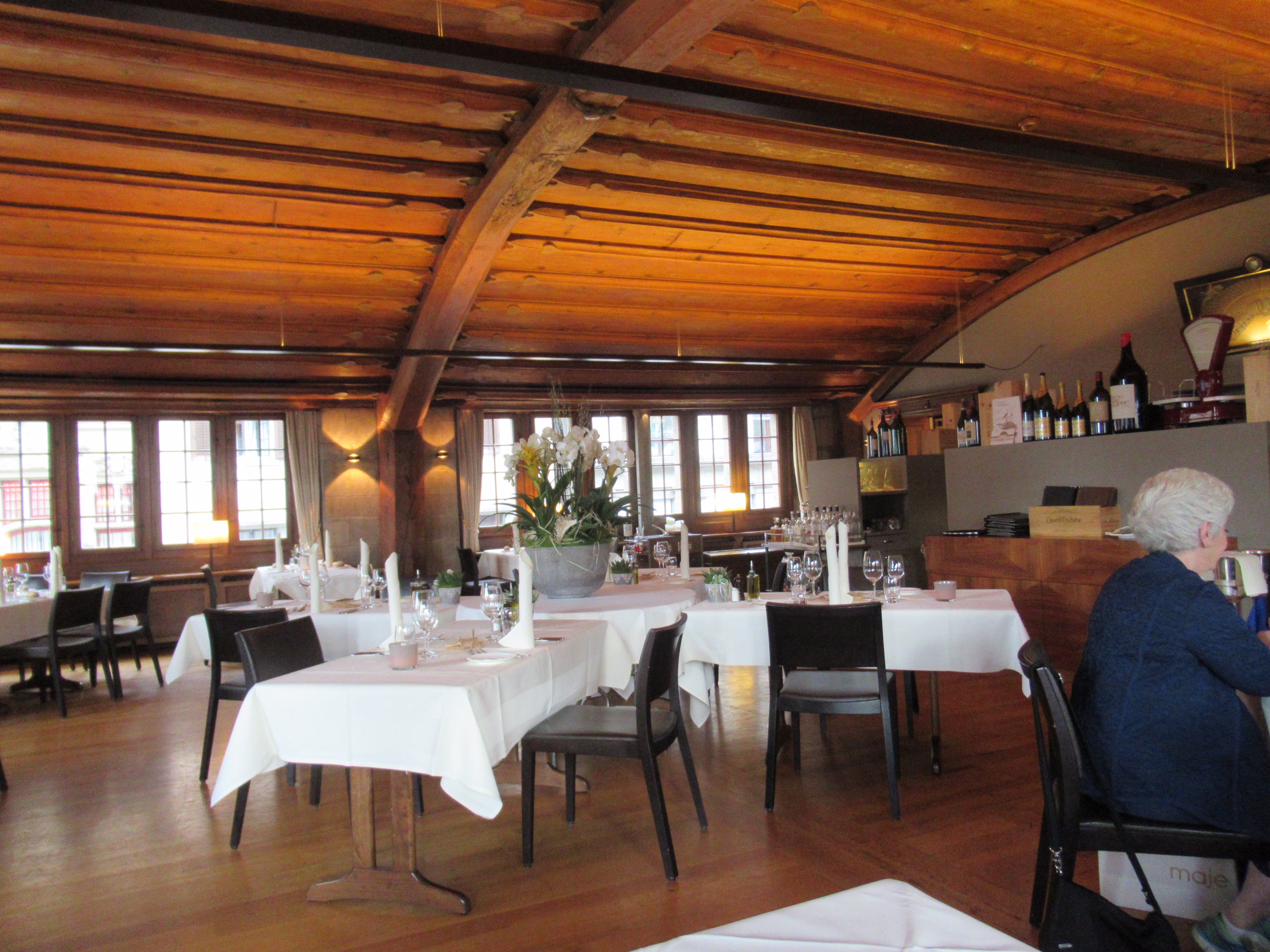 We had a table with a lovely view of the Limmat River and the Fraumunster Church. No being squeezed here, they actually had a table for six set for just the two of us. (Thank you Tami!). 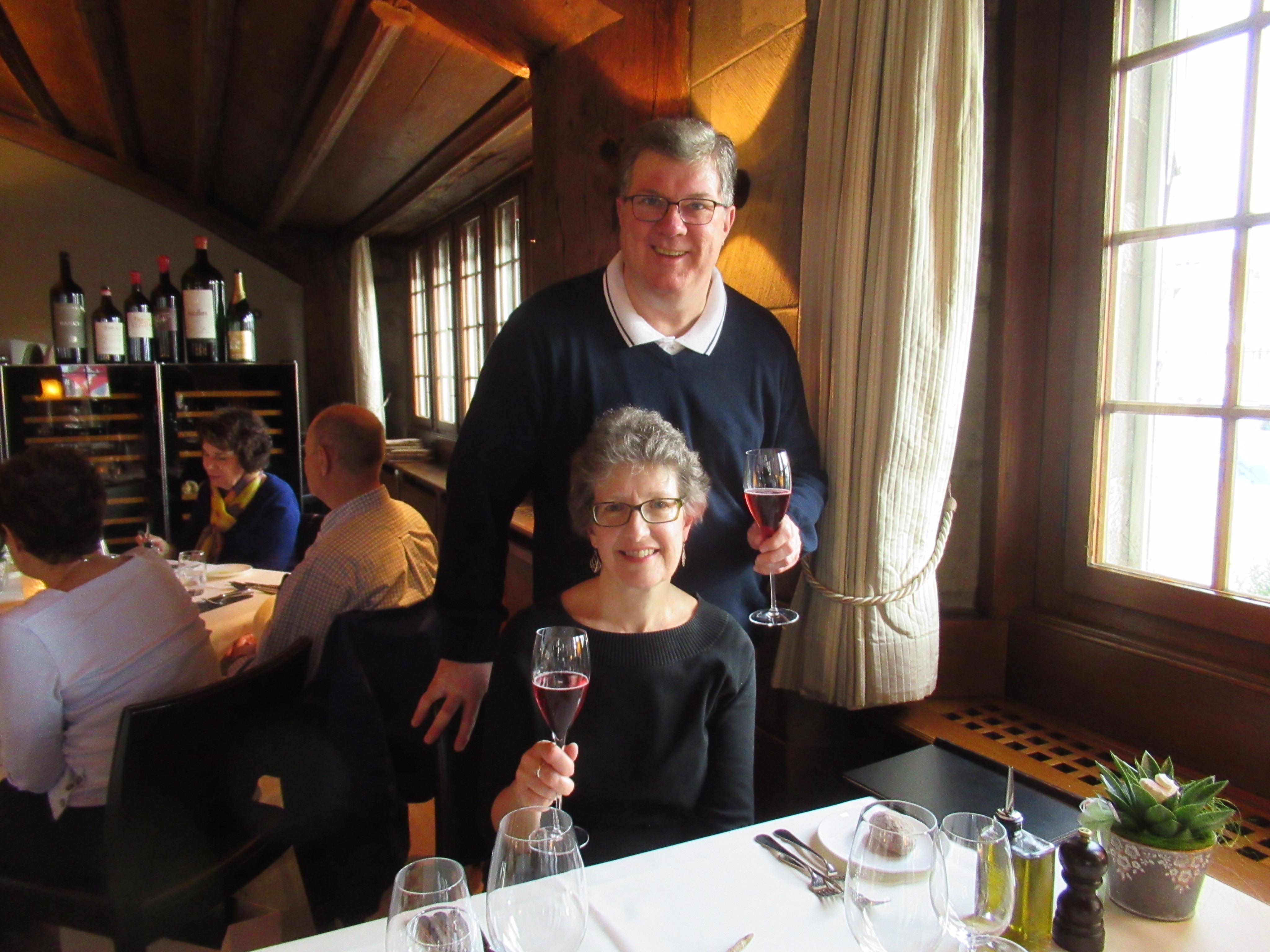 While the menu had many mouth-watering choices, we went with the Chef’s Degustation menu with wine pairings. Five courses of deliciousness, with perfectly matched wines, followed by an extra treat of table-side created Tiramisu. 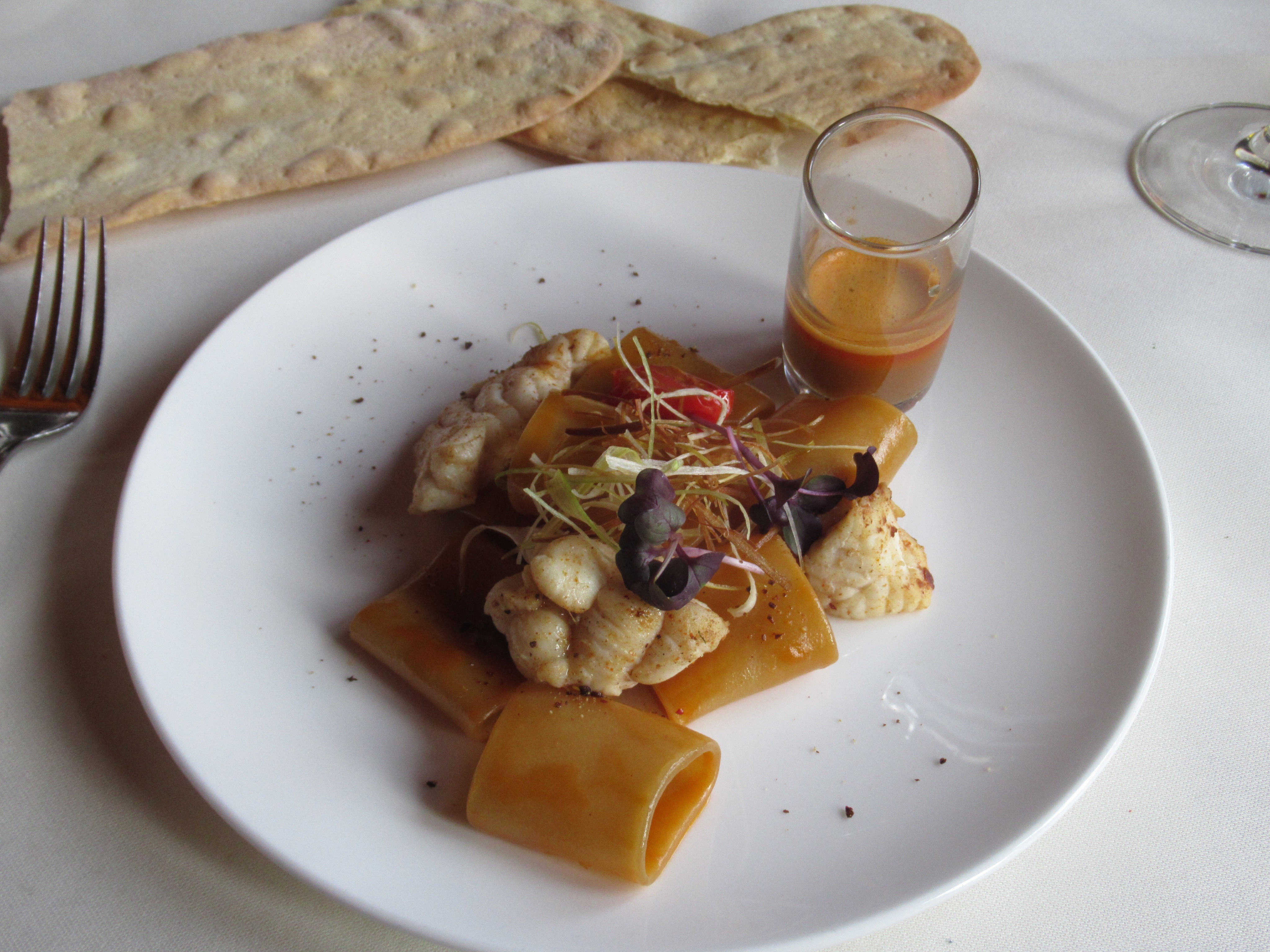 I could be wrong, but I don’t think our meal was part of the Jenny Craig diet plan!

Needless to say, we enjoyed the heck out of our meal. It definitely ranked up there  as one of the best meals we have ever had while traveling.

Additionally, we had the owner, maitre’d, chef and everybody but the valet parking guy stop over to chat with us. Can’t say enough good things about this restaurant. If ever in Zurich, put the Haus zum Ruder on your list. Not cheap, but pretty darn close to perfect.

Afterwards, we took a nice walk back to our hotel. Zurich is pretty at night, especially along the river. Can’t wait to get out tomorrow to explore. 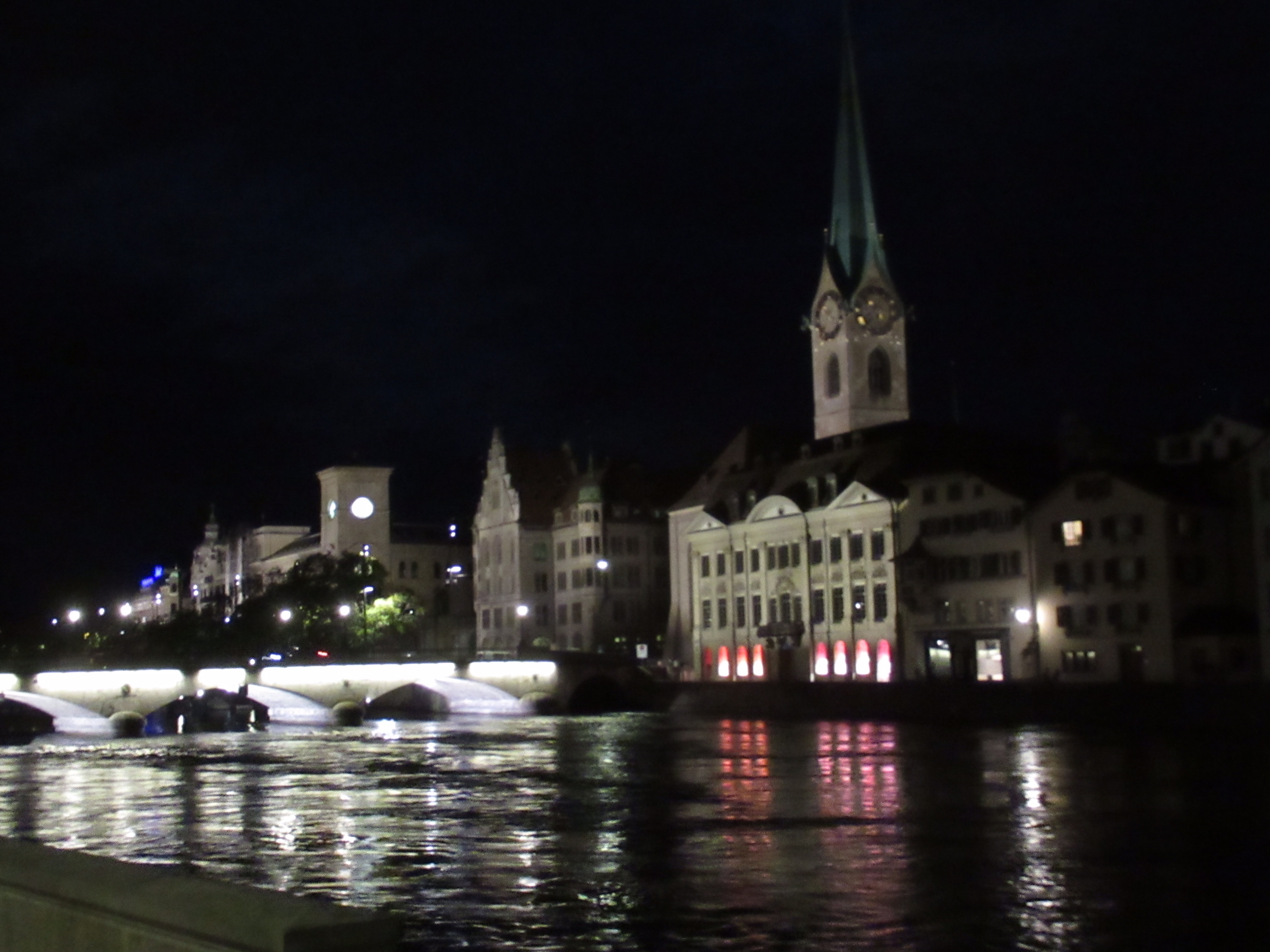 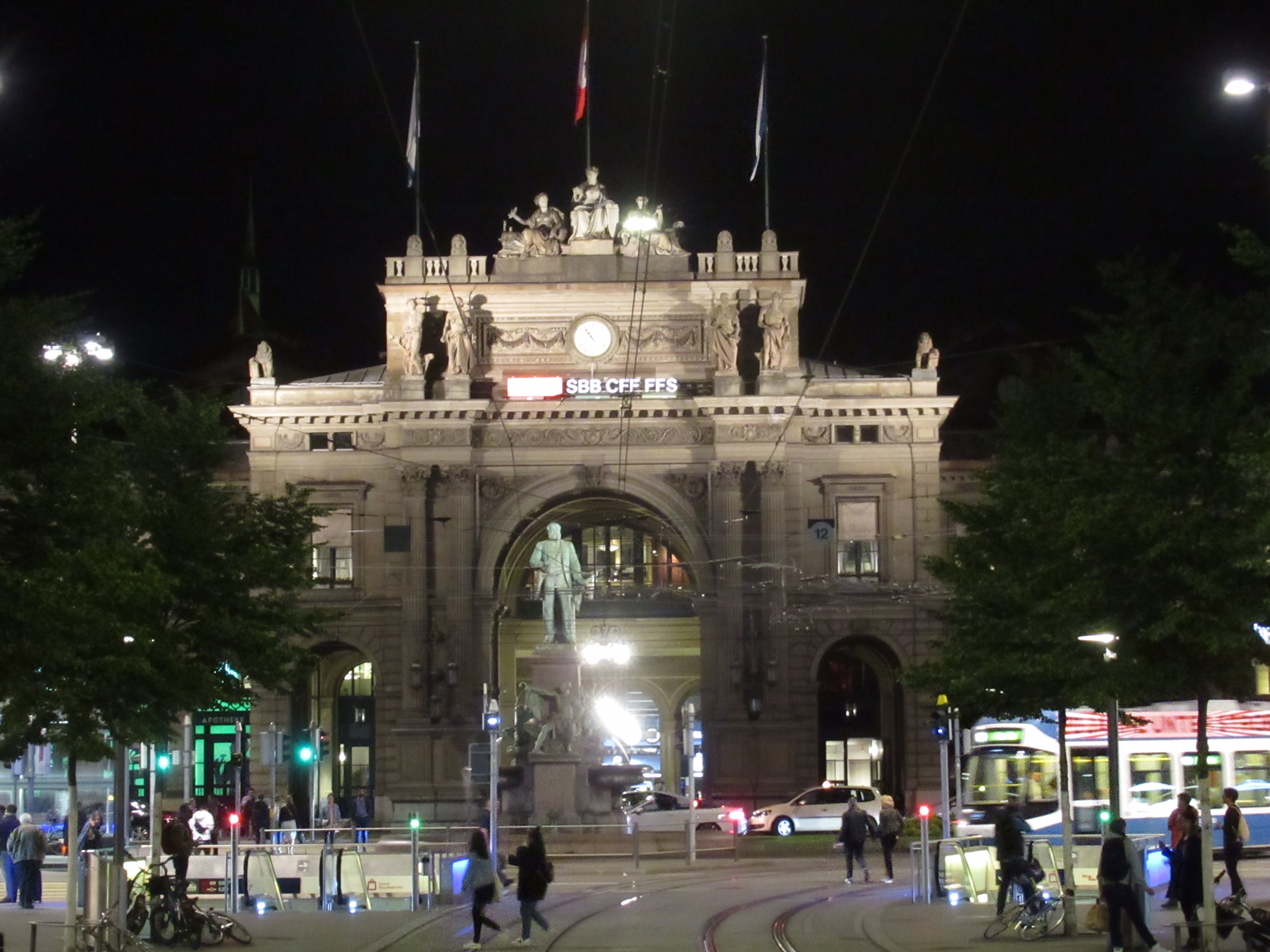 Like Loading...
This entry was posted in Switzerland and tagged Hotels, Meals, Travel, Zurich. Bookmark the permalink.

4 Responses to Day 1 – We have arrived in Zurich!