Day 7 – A visit to Mount Pilatus

What a great day!

The weather this morning was gorgeous – sunny, blue skies, calm winds and warm. We definitely picked a good day to head up to the mountains. There are three popular mountain destinations from Lucerne – Mount Rigi, Mount Titlis and Mount Pilatus. Our choice to visit was Mount Pilatus.

Mount Pilatus has many legends surrounding it; my favorite is that it is infested with dragons. One of those flying by would make for a cool blog post – as long as it didn’t eat us or breath fire and toast us. I digress.

So the route we chose is called the Golden Round Trip. It was comprised of a boat ride from Lucerne to Alpnachstad. At Alpnachstad, you transfer over to take a cog wheel train up to the peak. Then on the way down, you first ride a larger cable car about half way before changing over to a smaller four-seater for the ride to the bottom. And finally, you take the bus back to Lucerne. Since we have our Swiss Passes, it was free on the boat and bus, and half-price for the train and cable cars (36 CHF each).

Ok, off we went. We decided to take the first boat over as the weatherman had predicted rain or thunderstorms for the late afternoon. We boarded and left Lucerne at 8:38 am with a scheduled arrival time of 9:25 am. 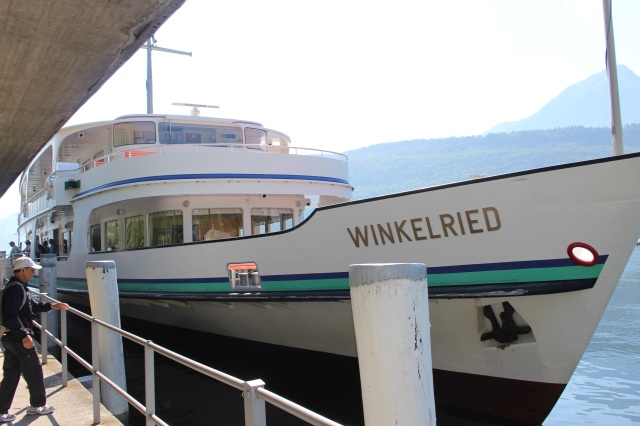 We had a beautiful ride over. The lake was calm, the sun was shining and the scenery was breath-taking: the green pastures dotted with houses, the mountains rising up from the lake and distant snow-capped mountains appearing through the morning haze. People on the boat were snapping away with their cameras, trying to get the best photos they could. 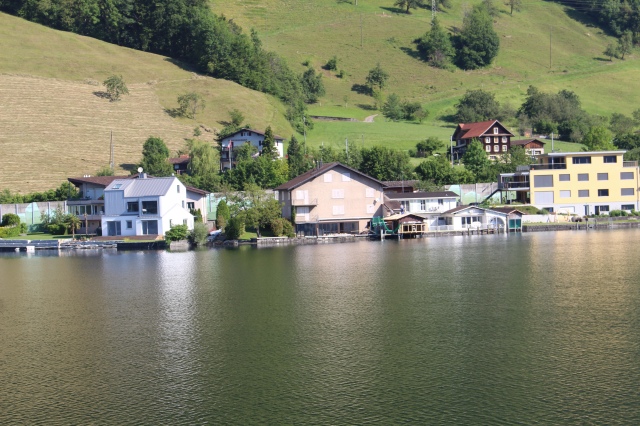 Soon we were coming to the pier in Alpnachstad and could see just high Mount Pilatus reached up. We were warned ahead of time about the long lines to get our tickets, but when we arrived the lines were non-existent. We walked right up to the ticket window and bought our tickets with the woman encouraging us to hurry as we could catch the train directly. So instead of hours-long waits, we were heading up within fifteen minutes of disembarking. Sweet!

Our cabin mates heading up were all very nice, so we were chatting and ducking so each of us could take pictures. Three American couples and one Aussie couple and all enchanted by the views and mechanical wonder of the cog wheel train. It’s the steepest cog wheel train in the world with up to a 48% gradient and was opened in 1889, and electrified in 1937. From bottom to top it covers 2.68 miles.

The ride up takes about a half hour and some parts are not for the faint of heart. The train cuts through forest land, goes through tunnels carved out of the rock and also clings to the ledge of the mountain with just enough room for the narrow gauge track. Just before arriving at the summit we were looking out the window and saw a cow. We all looked at each other and figured he was air-lifted or took the train up, because he was not wandering up the terrain.

When we arrived at the summit, it was as though we had entered another world. Absolutely beautiful views in every direction. Snow-capped mountains stretching across the horizon on one side, the lake and the city of Lucerne on the other city – stunningly beautiful. 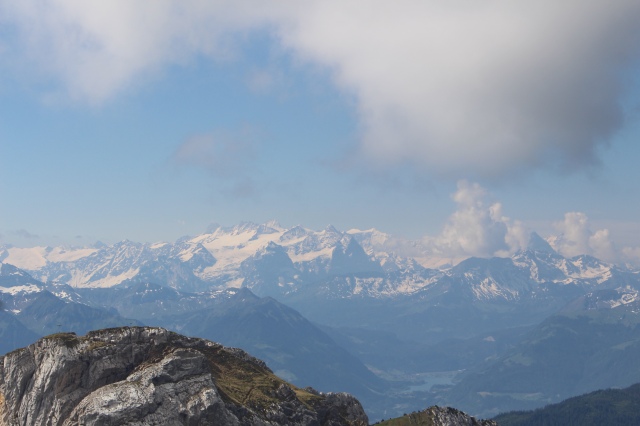 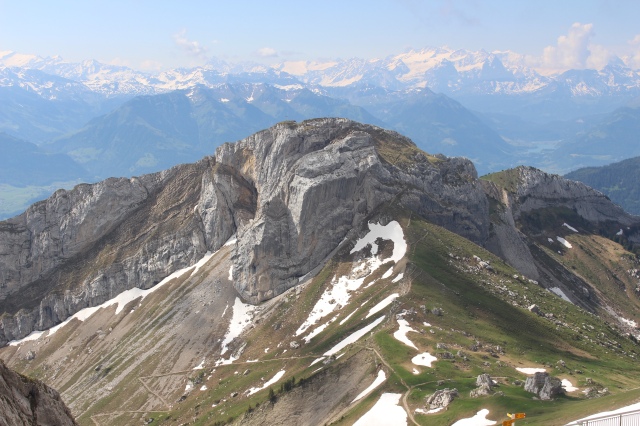 We then ventured up to the observation point which is a little bit higher. Despite trying to take one for the team, Sue dropped back to the summit and I continued up. Same great views, but a wee bit higher. This time if I was to say breath-taking, it would be because of the altitude. I could definitely feel it when I was climbing up, so I decided it was time to retreat to the safety of the ground level. 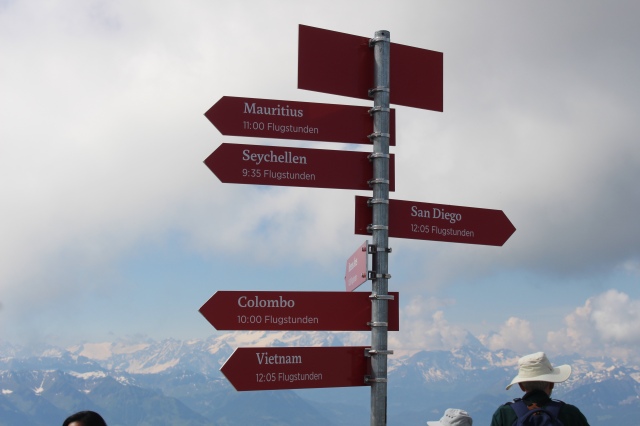 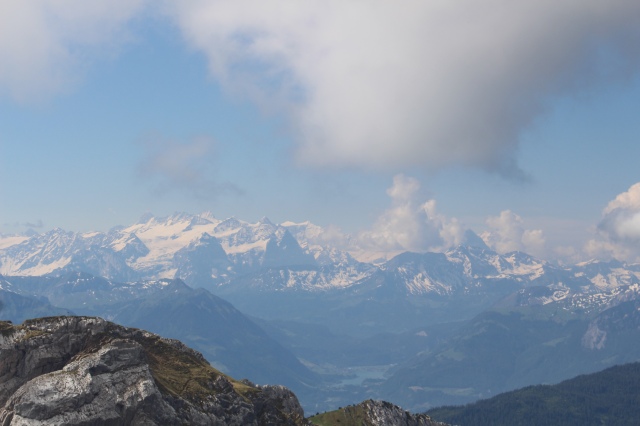 There were a few clouds that came floating by, definitely cooling the temperature when they appeared, but not a big deal at all. It was decision time for us and we decided to walk over to the seating area and have a glass of wine or two. 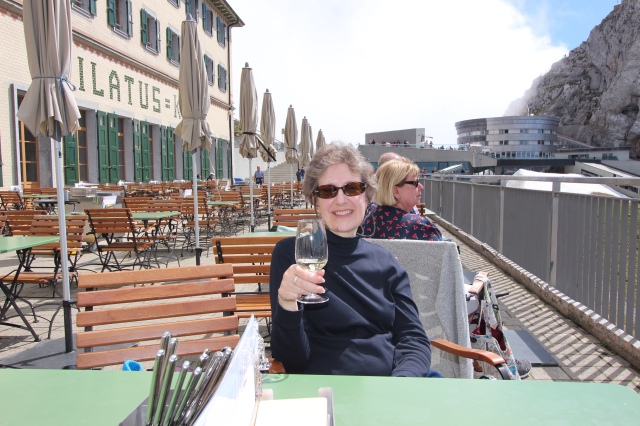 Have to say, this could be the first time we drank wine and the cloudy feeling was caused by actual clouds. 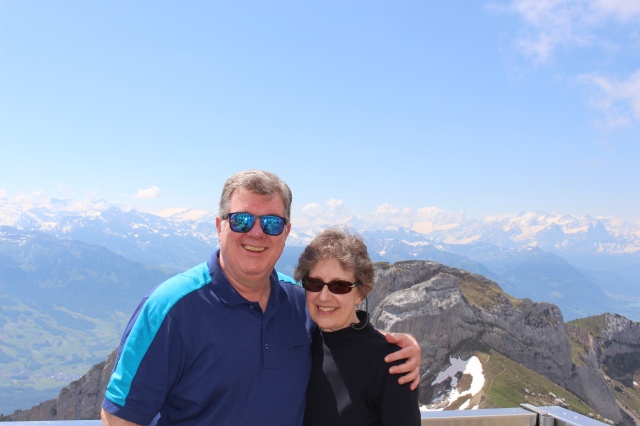 Time to head down as there was more adventure to be had. Though we left the station in the middle of the clouds, our cable car soon dropped below them and gave us a spectacular view of the lake and city below. When we arrived at the mid-station, while many others queued for the second cable car, we made our way over to the Fräkigaudi. 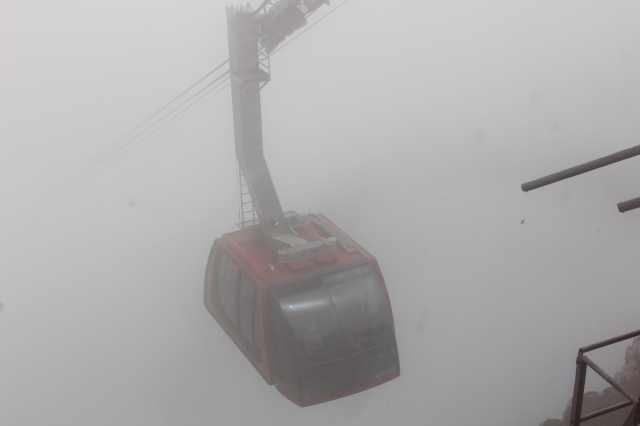 The Fräkigaudi is a mountain luge run – Switzerland’s longest at nearly a mile long. You sit on a small toboggan-like sled with wheels with just a handle in front of you to brake with. You get to the starting point, release the brake and zip down the mountain course. It’s a fairly steep drop, but the track winds its way down through the meadow, past some cows, through a couple tunnels and finishes down below. They then hook you up to a tow line and you and your sled are swept back up to the top.

We had a bit of a wait, but once on the track we had a blast. The starter was wearing a Green Bay Packers hat, so we had a little chat about Aaron Rodgers and their next season Super Bowl chances before taking to the course. Sue went first and we gave her a little head start as we figured I may go a little faster. I don’t know if I looked like a daredevil or if he was a mathematician and was calculating my weight and gravity. Either way, it was fun and I did catch up to Sue right near the bottom.

Fortunately for us, it started to drizzle just a little as we were being towed up, so they had to stop the rides as the track becomes dangerous when wet. Had we gotten there ten minutes later we would have missed out on the ride.

We headed back to the station and took the cable-car down to the town of Kriens. We shared our car with a young couple from Malaysia, who were very nice. Walking to the bus stop, we caught up to our Aussie friends from the ride up. They had also taken the luge ride and loved it. Who says old people can’t have fun?

The bus appeared and ten minutes later we were back in Lucerne.

Sue and I both had the same opinion of the day – Wow!!

Someone we know needed to rest a bit so we headed back to the hotel. All things considered, it was a good day considering the climbing, mini uphill hike to the luge run and then walk to the bus stop.

There was some thunder in the air and a few raindrops falling as dinner time approached. Not wanting to be caught in a heavy downpour or thunderstorm, we made a reservation at a nearby “Pizzeria”.

Well, La Baracca turned out to be a great choice. First, it was three minutes away. Second, they had much more than pizza. And third, the food was awesome. It was a cozy place with both indoor and outdoor seating. While they did serve pizza, they also served a full menu of Italian food and had a great wine list.

So two and a half hours later, we took a nice stroll back to the hotel with full tummies. We had enjoyed a couple of salads with an order of foccacia (that was really like a full pizza, not just the bread we expected), a large order of lasagne and a bottle of Tassinaia. Truly delicious, but truly too much!

As for the rain, it stopped long ago. Our waitress told us not to worry, all the rain falls “Upstairs”. Her meaning – it only rains in the mountains.

Back at the hotel, we rested and digested while looking at the photos from the day before turning in for the night.

Like Loading...
This entry was posted in Switzerland and tagged Boats, Cable Car, Coaster, Lucerne, Mountains, Trains. Bookmark the permalink.

4 Responses to Day 7 – A visit to Mount Pilatus