Another warm day ahead of us, but looking forward to seeing the vineyards and tasting some new wines.

Today we visited the UNESCO World Heritage Lavaux wine region. We’ve seen them from afar while taking the train in to Lausanne and while on our Lake Geneva boat cruise. Today, we meet the grapes up close and personal.

We have two tours scheduled today. They both begin in the village of Chexbres, which is where our story begins. We were up early to catch the 8:30 train. Not too many others were out and about this morning. In fact, we had the entire first-class car to ourselves. The ride over only took about 35 minutes. 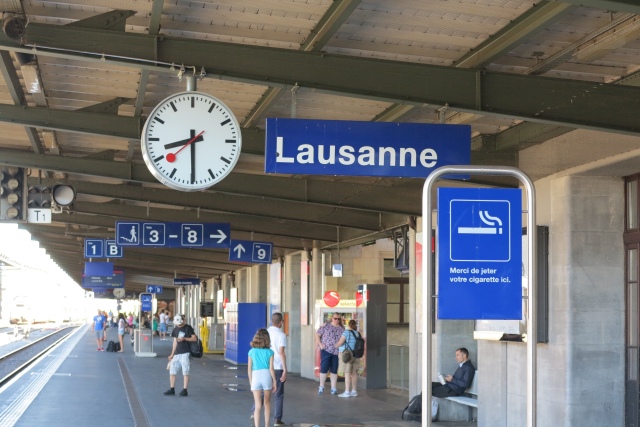 Our first tour began at 10:30am. Swiss precision was on display as the train pulled up within a few minutes and at 10:30 we were off. By we, I mean Sue, myself and the conductor – there was nobody else on the tour. We were definitely surprised that they didn’t cancel the tour and we got the full treatment.

The train weaves its way through the tight twisting roads cut into the vineyards. The views of the vines reaching down to the lake and up to the summit is tremendous. There were workers amongst the vines trimming the canopies and making sure the small berries were getting all the sunshine they needed.

We eventually arrived at the small town of St Saphorin, where we were greeted by a lovely woman and the local fire brigade. The lovely woman was going to take us on a short walking tour of the town, while the fire brigade continued their training drills.

The town dates back to at least Roman times and is incredibly cute: winding streets with narrow passages that let you scoot up and down. Magnificent little gardens tucked in every nook and cranny and wine!

The white wines of St Saphorin are delicious. Besides the one we tasted, we have had two others that we truly enjoyed.

Ready to go…..where are the people ? 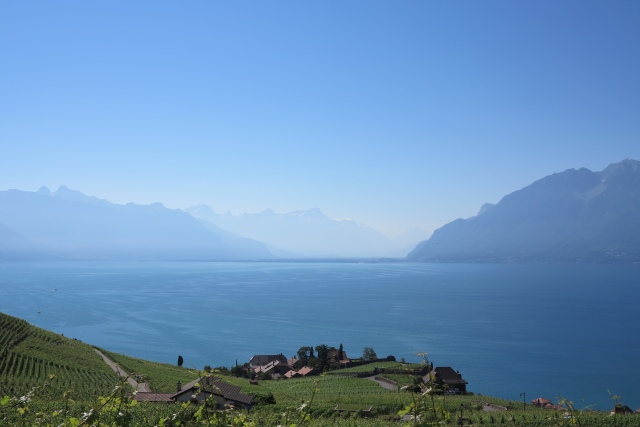 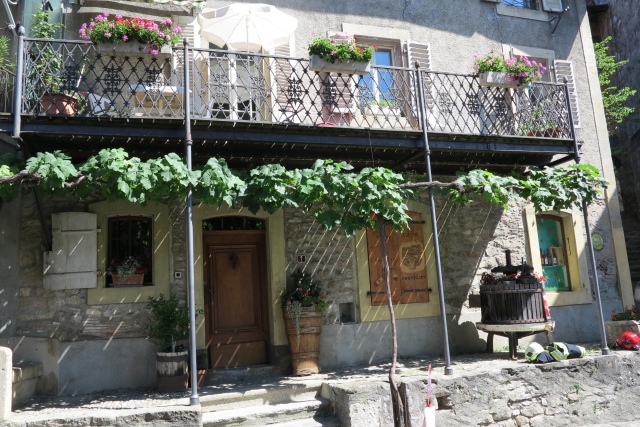 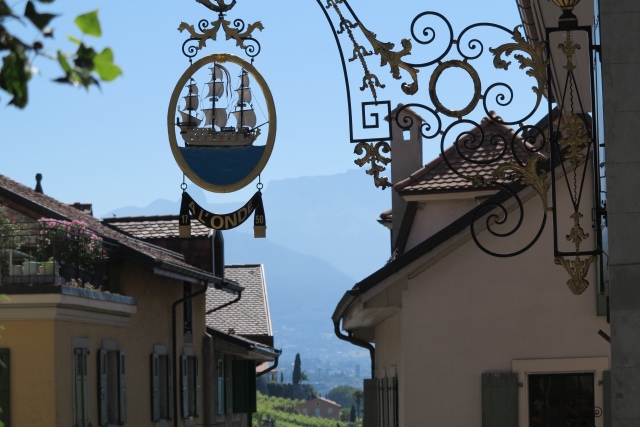 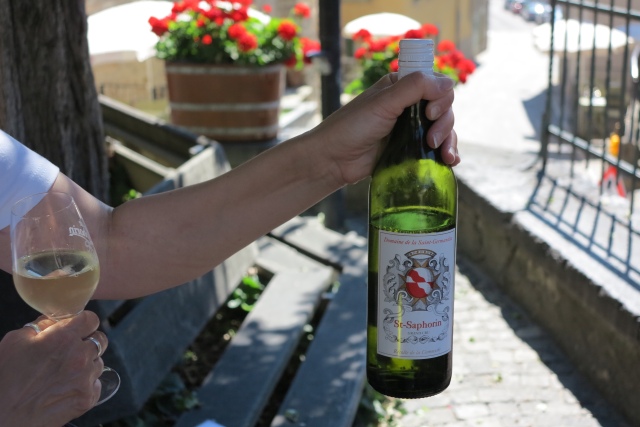 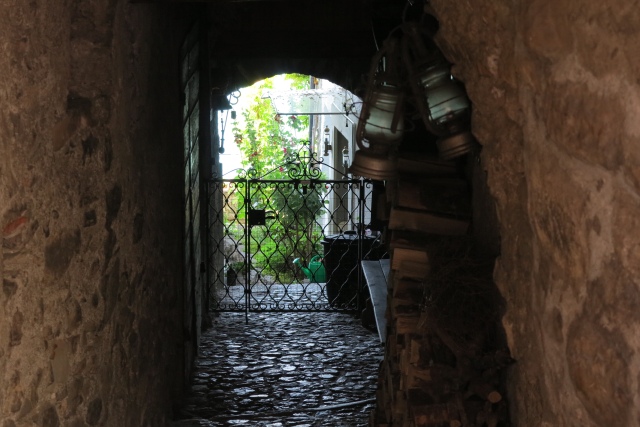 Our tour ended just after 12:00 noon and the next tour didn’t begin until 2:30 pm, so we got ourselves a cool beverage and found a shady place to sit and relaxed. We were still amazed that we had ended up with a private tour, but hoped there would be others on the next tour. 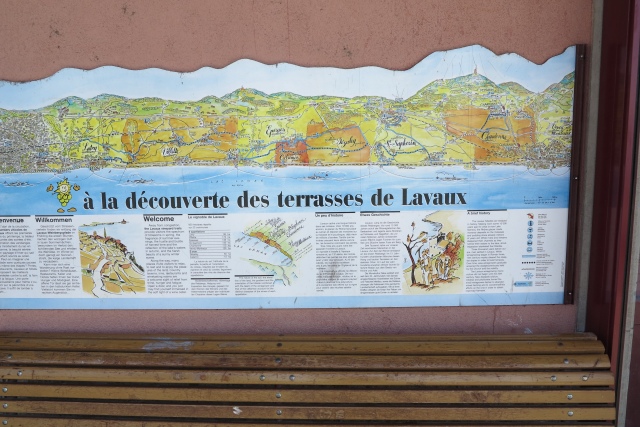 Where we were touring 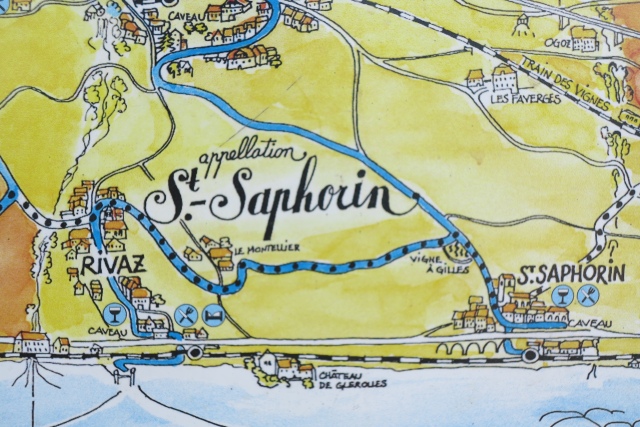 So 2:20 pm rolled around and so did the train. This afternoon, we’ll be heading to the Chardonne appellation and stopping at one of the vineyards for a tasting with about 20 others.

Just like this morning, the little train traversed the narrow roads and hair-pin turns while providing some beautiful views all around.

I loved seeing all the small berries on the vines. Right now they are young and adorable; later, when mature – Ooh La La!!

We stopped at the small winery “Le Fil du Soleil” high in the vineyards for our tasting. The two wines we tasted were very good. The first was a Rosé and the second was a white, much like a Pinot Blanc. The winemaker and his wife were very welcoming and seemed happy to answer questions and share their wine.

Soon it was time to climb back on the little train and head back to Chexbres. The scenery was just as nice on the way back, though it was getting warmer as the day went on. 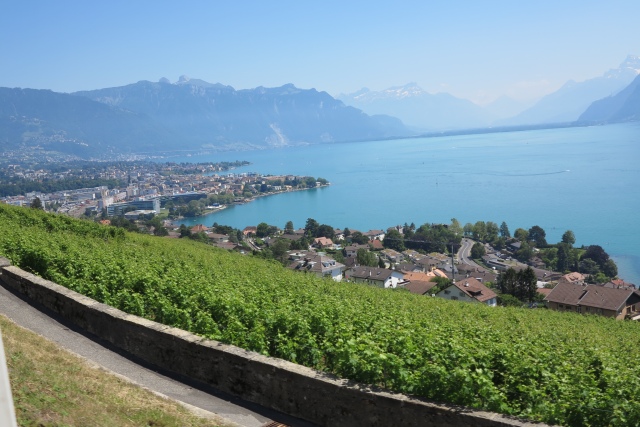 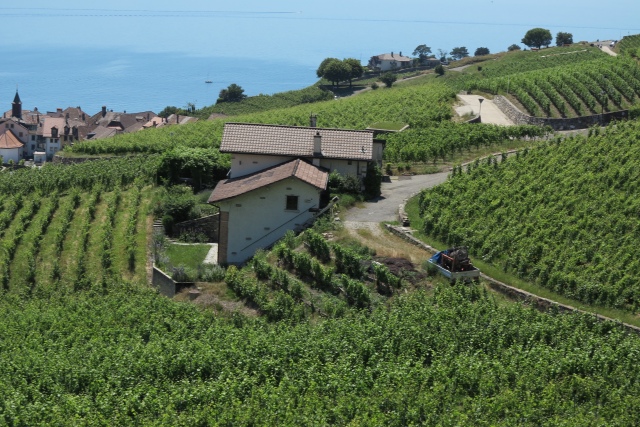 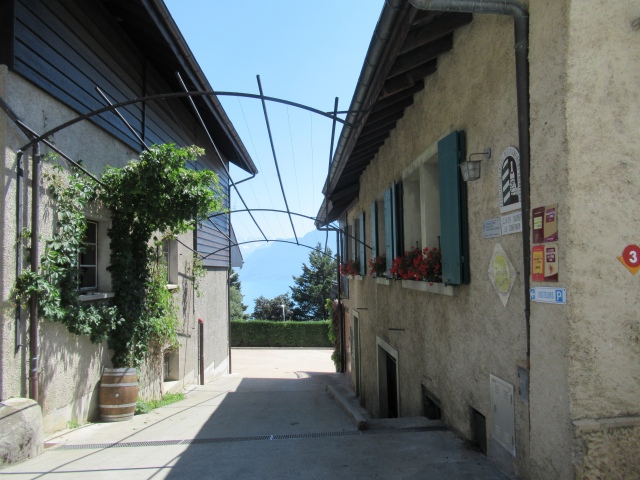 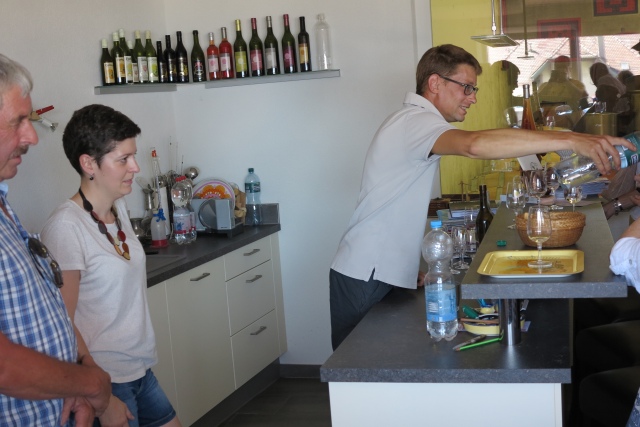 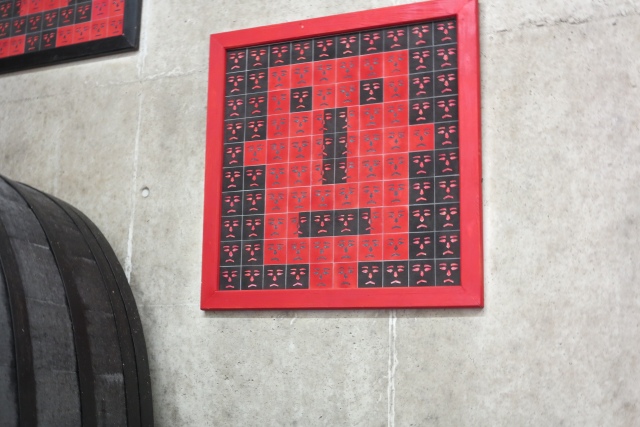 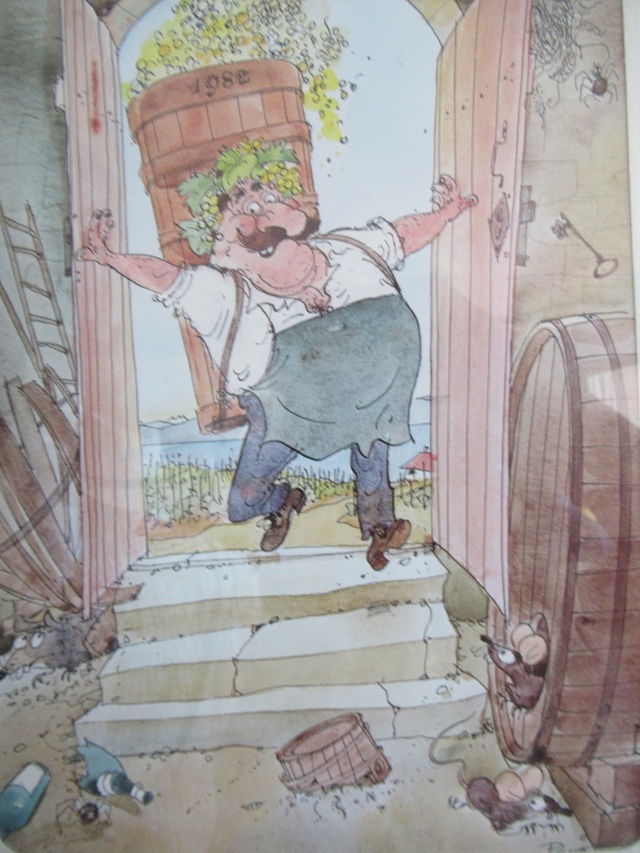 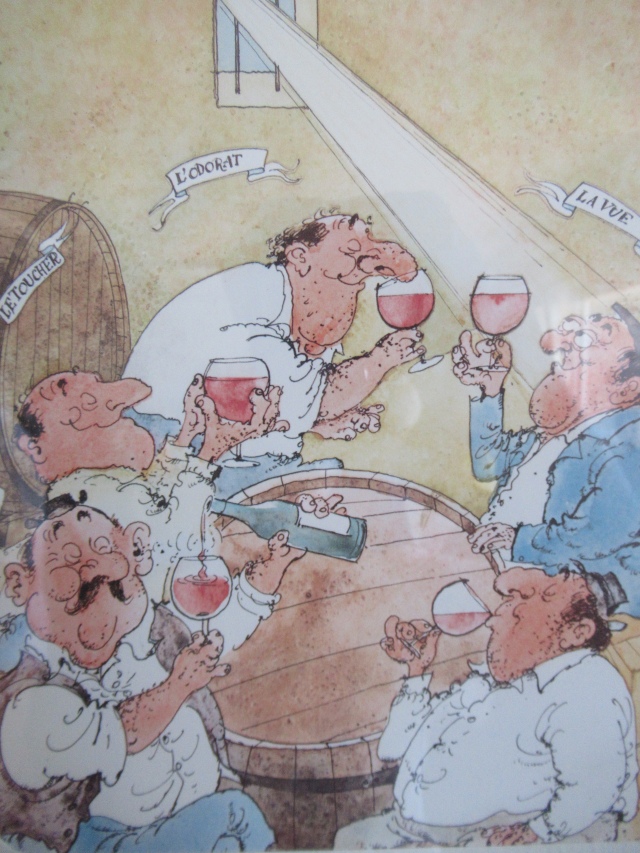 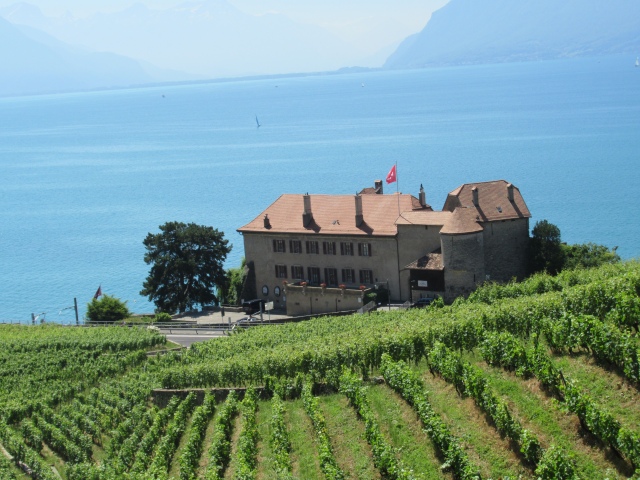 The tour finished timely and we were able to hop on the train back to Lausanne within about five minutes. We were both pretty hot and sweaty by the time we got back to Lausanne and then rode the Metro to the hotel. Cool showers were definitely needed as well as the a/c in the room to cool off.

Dinner was at a restaurant called “Minuit Soleil”. There wasn’t a chance in the world that I was taking the Metro and walking to the restaurant. The front desk called a cab and within minutes we were on our way in a/c splendor.

The restaurant was really nice and since we had earlier reservations, we scored a great table on the terrace. We began with a nice glass of champagne and starters of a wonderful gazpacho for Sue and a crab and avocado tartare for me. For dinner we both went with the Souris d’Agneau, complemented with grilled vegetables and couscous. A Swiss Pinot Noir from Epesses rounded things out. We also had a little ice cream for dessert – a scoop each of chestnut and butter brickle for Sue and pistachio and dark chocolate for me. 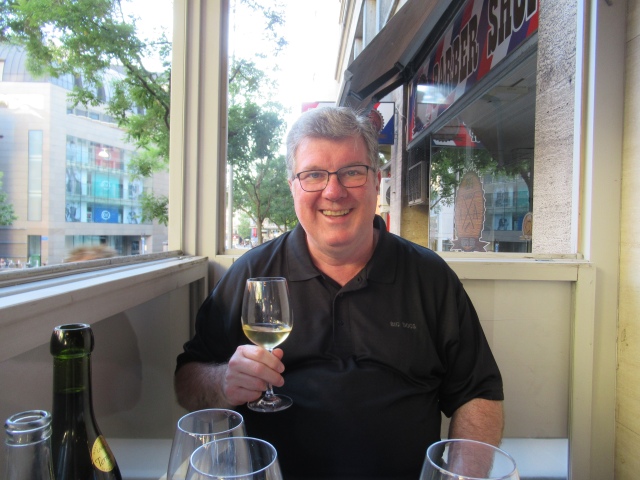 A brief chat with the owner of the restaurant as we departed and then a quick Uber ride back to the hotel. With full tummies, we headed back to our room and fell asleep early.

The fresh air and warm sun depletes one’s energy, but a nice comfy bed can sure replenish it.

Like Loading...
This entry was posted in Switzerland and tagged Lausanne, Meals, Trains, UNESCO, Vineyards. Bookmark the permalink.