Just a short ride back from the Amber Fort to the city of Jaipur. We have two places that we will be visiting.

The Jantar Mantar or city astronomical observatory was first on the agenda. It was constructed between 1727 and 1734 by the Rajput King Jai Singh II. The name actually translates to Calculation Instrument and it is a collection of measuring devices, including two huge sundials that are accurate to within 12 minutes and 2 seconds, respectively. All without electronics of any kind, just precision mathematics. Very cool. 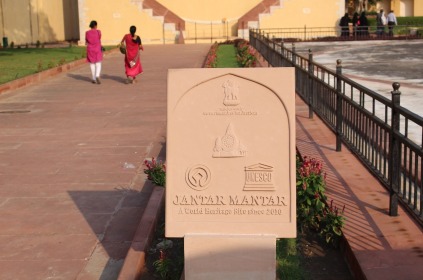 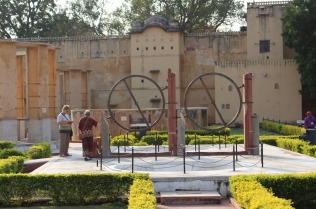 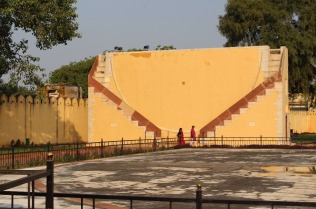 There were five of these observatories built and I believe they said there are still three that remain today.

From the observatory, we walked over to the city palace. The palace includes museums containing artworks and weaponry, in addition to the royal residence. They have two large (900 gallon) silver vessels that were filled with water from the Ganges when the Maharaja visited England. Of course, they were filled high upstream where the water is pure as it melts from the Himilayan Mountains. 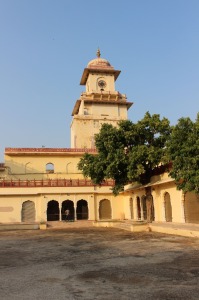 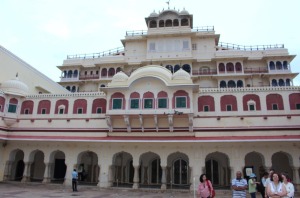 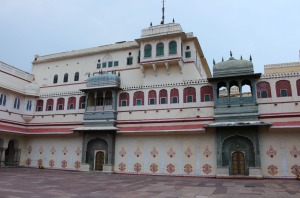 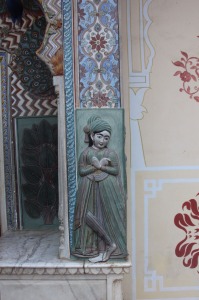 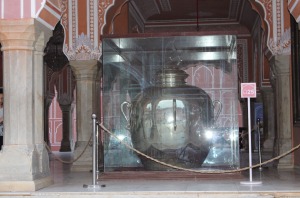 It had been a long day and people were getting tired, so we headed for the buses to drive to the hotel where we would be eating dinner. The traffic was incredible. Horns blowing, people weaving in and out of lanes – yikes. Occasionally you would catch the eye of a rickshaw passenger or person on a scooter and inevitably get a smile.

We made a stop so some folks could use an ATM machine and watched as a sidewalk barber worked on a customer. No fancy salon or product, just scissors and a razor. The guy was pretty quick too and the final cost – 200 rupees – $3.00. Michele and Tom – Franchise opportunity?

As we continued up the main road, it actually started to rain and there was lightning in the distance. Since they don’t get much rain, they were happy with it. 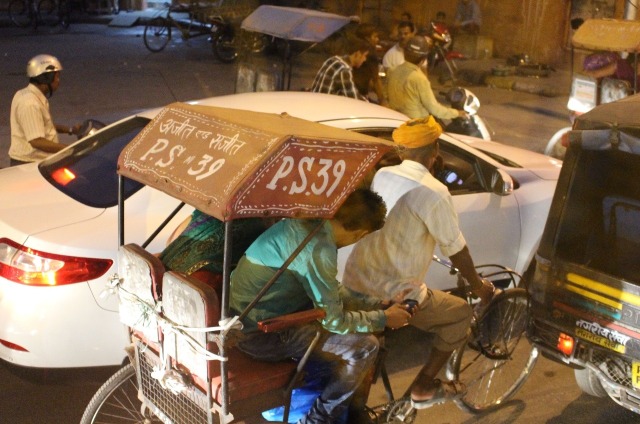 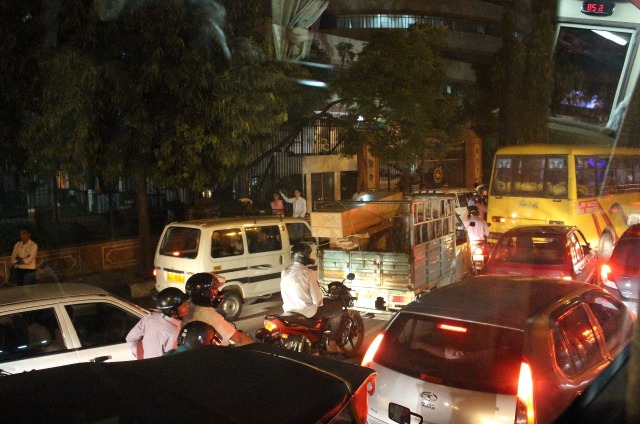 Dinner was at the Clark Hotel, a nice hotel in the newer part of the city. They looked a little frantic as we arrived a bit early and they were still finishing their setup. Nobody in our group cared, we were just happy to sit down somewhere cool.

Prior to dinner, some local artisans performed traditional Rajasthani folk music and dances. They even invited members of the group to join in the dance. Many people didn’t want to participate, but not us. I wowed them with my fat old guy moves. 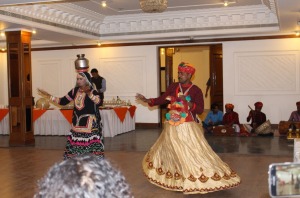 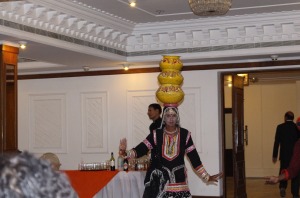 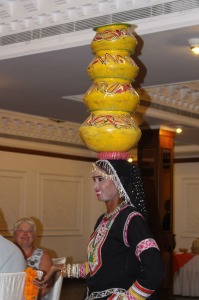 Dinner was good, but everyone was even more tired by now. When we walked upstairs, our bus was missing. Apparently the driver got caught back in traffic on the way to pick us up. Then, when we arrived at the train station, our train had not arrived back yet either. Some were grumbling, but it wasn’t like we would be living on the streets.

When the train did arrive, everyone pretty much packed it in for the night. We both had a good night’s sleep and had visions of our safari still in our heads.

Like Loading...
This entry was posted in India and tagged History, Jaipur, Sites, Tour, Trains, UNESCO. Bookmark the permalink.