After yesterday’s busy schedule, we were able to sleep in this morning. The journey from Jaipur to Khajuraho is a long one, so we had some time to just relax this morning en route.

The town of Khajuraho is a small farming community of 15,000, yet they have an airport and a train station. Driving into the town, you can see more modern looking dwellings and signs of construction and infrastructure work. There are also five top notch hotels, all to support the tourism related to the temples. Quite impressive!

Khajuraho is a town famous for it’s many Hindu and Jain temples. Many people have only heard about the one temple with the Kama Sutra type images, but there are many more. The temple area is divided into two sections – east and west. There were once 85 temples that stood here; today, there are 25. Time and nature have taken away the others, but the remaining temples are gorgeous.

We are to start with the eastern temples. There are six temples located in this section. It is not a UNESCO World Heritage site like the western section we will see later. The path from the bus to the temples is a gauntlet of “friends” trying to sell souvenirs. It’s not an easy navigation, but we make it unscathed. Our guide leads us to the temples for our first close up view. First reaction – Wow! 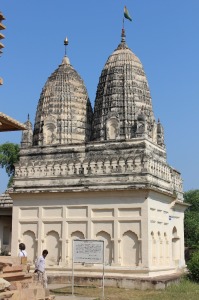 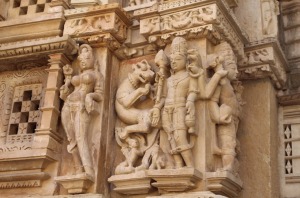 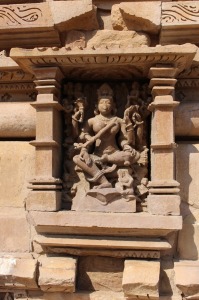 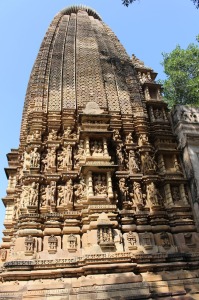 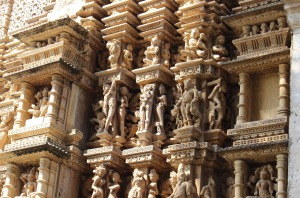 The temples are intricately carved with Gods and Goddesses and life scenes from the Rajas. Though a little different, they remind you of the temples that you see in Cambodia at Ankor Wat and in Mexico. Our guide tells us about their creation and meanings. He is a local and quite passionate about the temples.

The western group of temples is a beautiful complex in a park-like setting. There is one active temple there (it’s separated from the others) and eighteen others. They were all built before the 12th Century, probably between 900 AD and 1070 AD. 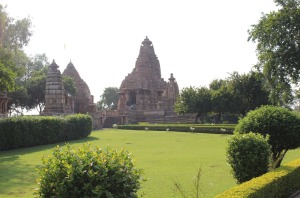 We walk around and talk about them a bit before heading over to the Temple with the Kama Sutra carvings. There is much more to the carvings then the eroticism. The detail allows the sculptor to express emotions with body language and subtle gestures. But, when all is said and done, he was all about the treble – no bass!

After walking around the temple, we had the opportunity to go inside. The steps leading up are steep and tall. We had two people who started to enter without removing their shoes and people stopped them quickly. Inside, there is not much. It is a solemn space to pray to the Gods.

We were then given about a hour to wander and take photos around the grounds. Sue and I wandered around and then found a place to sit for a bit. The security guy started chatting with us and helped pass some time. He was very nice, probably in his 20’s and interesting.

As the group started to gather at the gate, it was time to head for an afternoon beverage break. The break was at a small handicraft market where once again many people took advantage of the shopping while others just chilled out.

Next came a cultural program featuring a group of young traditional folk dancers. They were very energetic and very entertaining. There dance and music program told a story about Vishnu. Nice job!

Like Loading...
This entry was posted in India and tagged Khajuraho, Sites, Temples, Tour, Trains, UNESCO. Bookmark the permalink.