Woke up to the fog shrouding the surrounding hills. The sun is up and will hopefully burn it off early. Cleaned up and went down for breakfast. Looks like the others got off to an early start, no worries, they left plenty to eat. 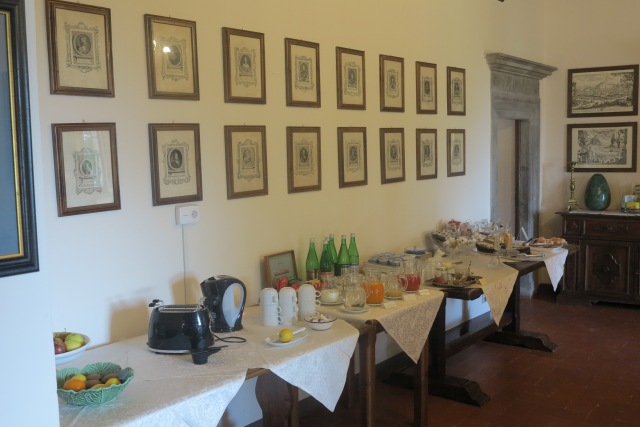 Back to the room to gather our things and off we go to Assisi. Assisi was the home town of St Francis and also St Clare. Both are entombed there and their followers built beautiful basilicas in their honor.

The short version of the story is St Francis was born to a wealthy family. He went away to war and was captured and imprisoned for a year. After being released, he made his way back to home and had an encounter in which he prayed for guidance and God spoke to him through a crucifix and told him his church needed saving. Francis turned his back on his comfortable material life – and declared his loyalty to God alone. He lived a very simplistic life, and together with his followers spread the word of God, leaving a legacy of humanism, equality and love of nature.

Assisi is not a huge town, but it attracts huge crowds of pilgrims and tourists. But today, the crowds were not too bad. Walking through town had a very calm feeling. Quite spiritual, despite souvenir shops everywhere. Most were quite tasteful, though St Francis bobble heads may have crossed the line.

We started our walk at the Basilica of St Clare, but they were closed for lunch. So, instead we walked on to the Temple of Minerva. The temple was originally built by the Romans in the 1st century BC. The Church of Santa Maria sopra Minerva was added in the 9th century and the bell tower in the 13th century. On the inside, despite the mainly baroque look, there are still remnants of the original Roman temple stone floors. I love the stairs leading into the buildings. The steps are all different heights and can be a tad slick. Keeps you on your toes. 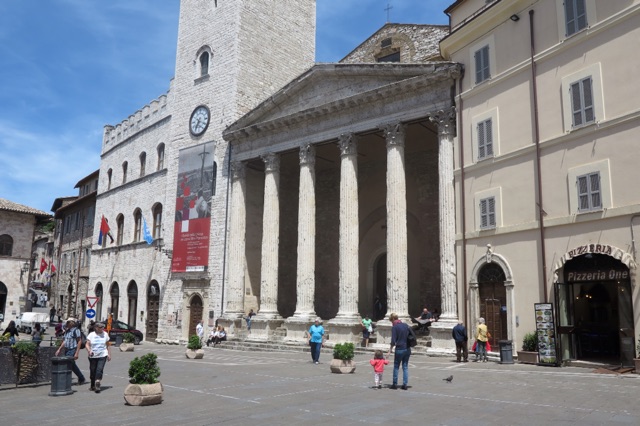 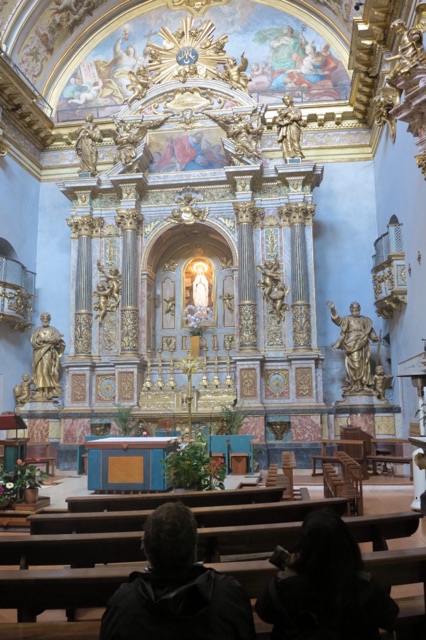 We continued on our way to the Basilica of St Francis walking down the main street known as Via San Francesco. Lots of small shops and restaurants line the narrow road. You have to squeeze against the walls when a vehicle drives through. After a last bend in the road, the basilica appears.

It’s not overly ornate, but it is huge; and simple – the way St Francis would have preferred. There are three parts to the church: an upper basilica, a lower basilica and St Francis’ tomb. Unfortunately, no photos are allowed inside the basilica.

The lower basilica has a very subdued feel to it. There are frescoes around the walls telling stories of St Francis and Christ. The altar is located directly above St Francis’ tomb. Off to the side is a small chapel that is filled with relics of the Saint. 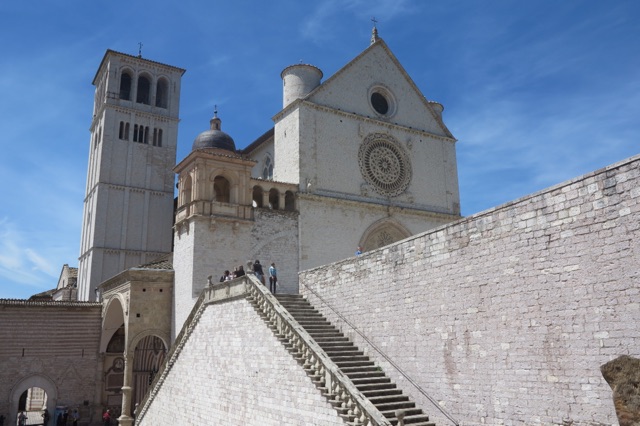 The upper basilica is brighter and built in a gothic style. The walls are lined with 28 frescoes that depict scenes from the life of St Francis. They are all very beautiful. There is also an area that is just plain plaster. This was the result of the earthquake in 1997 that caused a partial collapse and killed four people.

Back outside, the front lawn is planted with bushes that spell out PAX or peace and also St Francis’ “T” that he used.

Heading back in the direction of St Clare’s Basilica, we stopped at the Chiesa Nuovo, a small church dedicated to the martyred friars. There were some pretty gory scenes depicted there. We definitely made fast work of that stop.

Our final destination was the Basilica of St Clare. Clare was a rich girl who fell in love with Francis’ message and made secret arrangements to meet him. She cut her hair, was clothed in a simple tunic and despite all of her father’s protests went on to found the Order of the Poor Clare’s.

She spent the next 40 years of her life living in the convent of San Damiano. Her tomb is located under the basilica as well as many relics. It was a very inspiring day, but now it was time to head back to the castello.

The traffic was minimal as we wound our way through the country roads and small towns. Arriving back safely, it was time to relax before dinner.

Our favorite server, Isabella was here again tonight. She is so friendly and patient, especially while we try our best to mangle our orders in Italian. Another super dinner and back to the room to rest up for tomorrow’s adventure.

Just a little side note:  A woman guest we were chatting with asked if I had taken Italian lessons as she had heard me order dinner yesterday. Of course, it must have sounded impressive to people who won’t say anything in Italian besides buon giorno. Jeez!

Like Loading...
This entry was posted in Italy and tagged Assisi, History, Sites, Small Towns, Umbria, UNESCO. Bookmark the permalink.