Today will be a long travel day. We have three trains to catch to get to Sorrento.

Grabbed a quick breakfast in the hotel and then headed over to the train station. While the Hotel Astor wasn’t glamorous, it sure served it’s purpose. We only had to cross the street to get to the train station. Just a little whine – hauling the suitcases up and down the stairs is such a pain.

While waiting for our train we met a very nice couple – Paul & Sue from Portland. It was pleasant to chat and they told us that music students from SUNY – Genesseo had performed concerts in Perugia over the weekend and were well received. Small world.

When the train finally rolled in, we boarded and headed off to Rome. The train passed through many of the towns that we had visited or planned to visit as it made it’s way south. The trip was about three hours and was actually comfortable. We had a little girl  and her mother sitting next to us, and she was adorable.

Cute kid on the train 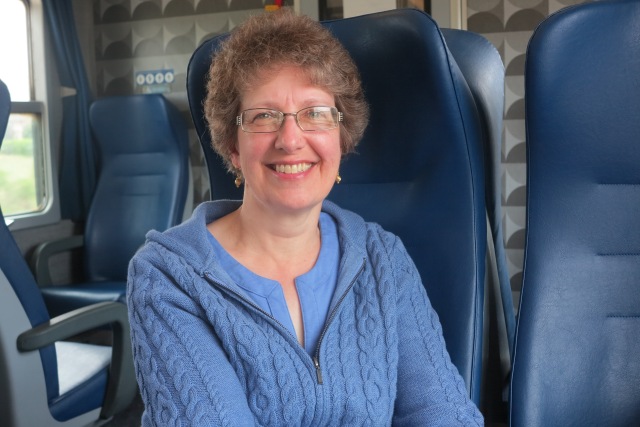 Cute adult on the train

The Roma train station is quite large. Once we left the train, we had to move to a new platform that was a ways away. Italians are maniacs on the road, but walk like it’s a parade when you want them to go fast. We made it to the track crossing area to find that our train was delayed by 15 minutes. We headed over to our platform and waited for the train to arrive.

This leg is on the Freccarossi, which is that fast train from Rome to Naples. It had started its journey in Venice this morning, so only being a few minutes late wasn’t bad. When we did start out, we picked up speed quickly and before you know it the sign said we were at 294 kph or about 180 mph. The hour and ten minutes went by quickly and we found ourselves pulling into the Napoli Centrale train station.

Here’s where the fun started. You have to go down to the old railroad station, which is only a short walk, buy a ticket and then cram into this small railroad platform with lots of other people. No seats, when the doors open just move and push your way in. We couldn’t get on the first train, but did manage to squeeze on to the second one.

Each station that we came to, more people tried to squeeze on and nobody was getting off. It was like Weird Al Yankovic’s “Another One Rides the Bus”.

So squashed in like sardines, we rode on for a little over an hour until we reached Sorrento. Along the way, besides the smell of BO from armpits reaching for the handles and a couple people that really should consider using the shower in their house, my wallet was pick-pocketed.

While you’d think I would be cursing up a storm, I’m not. That’s because they picked my decoy wallet. It’s an old wallet that had a 10 Rupee bill left over from our India trip, plus a note in a couple languages calling the person a loser and telling them to get a job! My real wallet was in my front zipped pocket and was safe. I really wish I could have seen the person’s face when they opened the wallet. Oh well.

After being squashed for over an hour, neither one of us wanted to walk to our hotel dragging our bags, so we grabbed a taxi. Our driver was kind of a middle-aged Italian hippie fashionista woman who was great. She made sure we understood that she couldn’t drop us off right in front of the hotel because the streets were too narrow before we set off.

On the way to the hotel, she pointed out lots of places and things for us to see and do while in Sorrento. It felt like a sight-seeing tour in the Mystery Machine. She dropped us off, pointed the way and just as promised about 50 meters away –  The Hotel Regina.

The hotel is lovely. The location is even better than I expected. After checking in and getting the low down from the front staff, they showed us to our room. The room name is the ‘Positano’ room and as soon as you enter you look out over the bay of Naples and Mount Vesuvius. I know it’s been a long time, but as Sue said, “If that thing goes off we’ll have one hell of a night light!”. 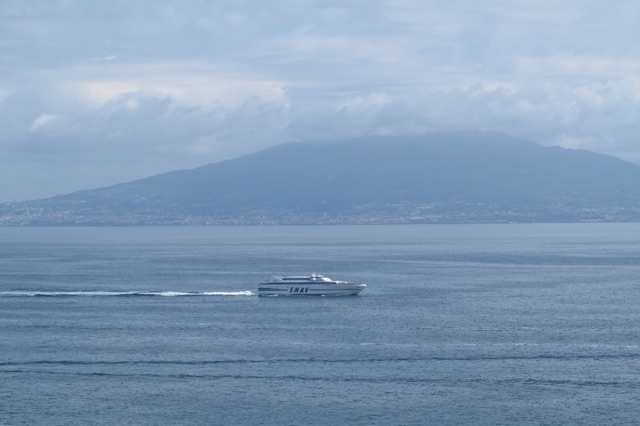 The room isn’t gigantic, but there’s plenty of room, a comfortable bed, a balcony with chairs to watch the sea and it’s spotlessly clean. Bravisimo! And they left us a complimentary bottle of wine – Double bravisimo! 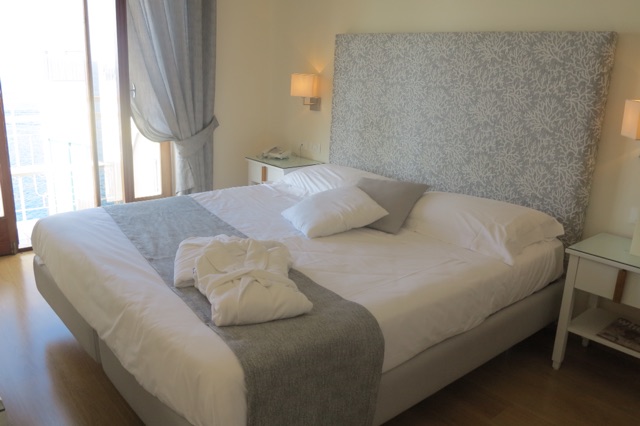 We washed up and relaxed For a little while before heading out for dinner. We found a small place called “Sacro & Profano” that was nearby and had a wonderful meal. Prices are just a little higher here, but the food was delicious.

While we were enjoying our meal, an accordionist walked by and started playing tunes that I knew the words to – not good! For a minute I forgot we weren’t a duet and sang along. Such fun. Definitely worth a small tip and a big smile. When we finished, our waiter brought us a glass of limoncello that was “from him”. Great way to end the evening.

We strolled back to the hotel to get a good night’s sleep. All that sitting made me tired!

Like Loading...
This entry was posted in Italy and tagged Amalfi Coast, Sorrento, Trains. Bookmark the permalink.