Looks like another beautiful day – perfect for our day trip to see the Ruins of Pompeii.

The tour bus picked us up near the hotel along with a few others from hotels nearby and then we were off to Pompeii. Traffic was heavy with long lines of cars making their way towards Sorrento and the Amalfi Coast. Our driver, Marco, kept us moving and in no time (an hour) we arrived at Pompeii. Our small bus group joined up with other groups to make a group of 50 on the tour. 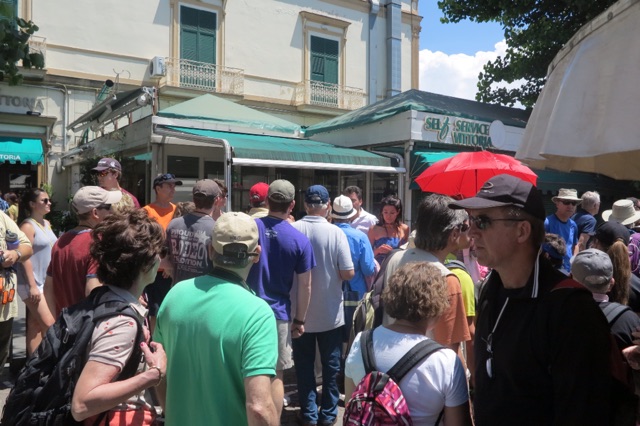 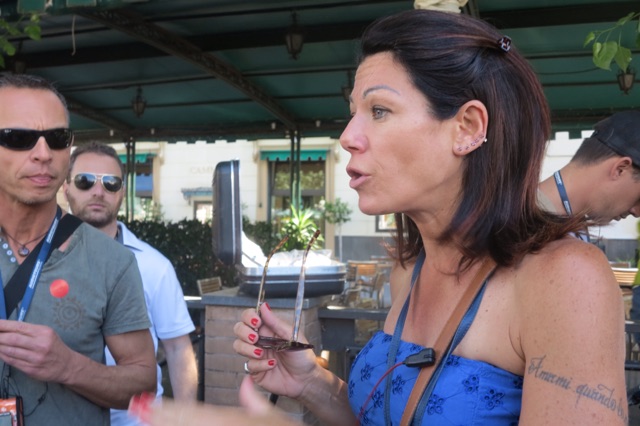 We all received small radios with an earpiece and then we headed in. Our guide was very good. Besides keeping the group together, she also provided inciteful information and added a little humor along the way.

So in 79 AD, Mt Vesuvius erupted and buried Pompeii under tons of volcanic ash. The pyroclastic blast probably incinerated many people as it rushed towards the city. It wasn’t rediscovered until the 1500’s and excavations began in the late 1700’s. The amazing thing that came out of the tragedy was that they didn’t know they were living on a volcano. 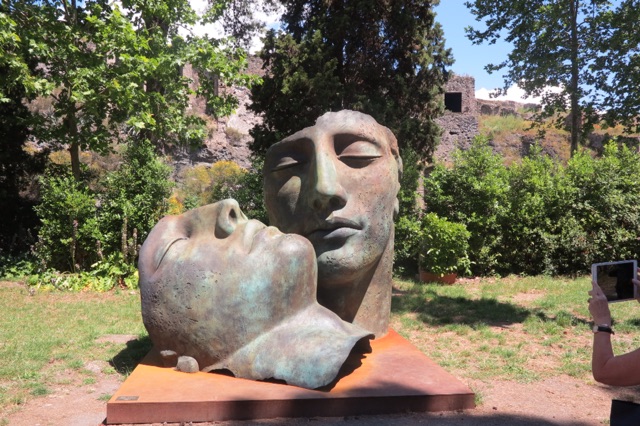 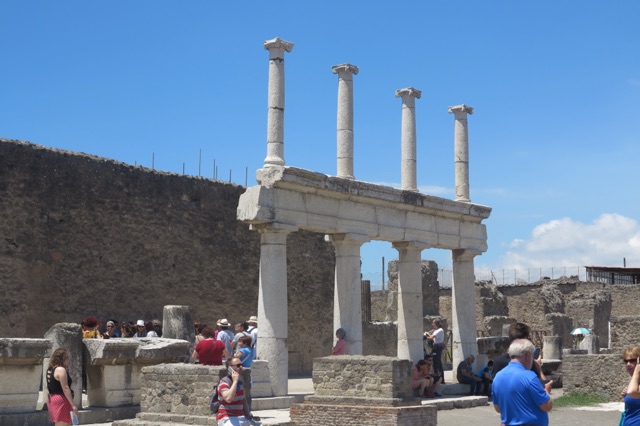 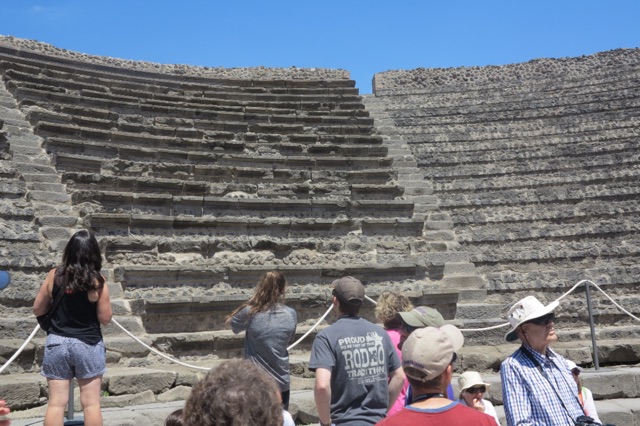 Our tour took us through the same streets that people walked on 2600 years ago. You can see the wear marks from the chariot wheels that once rolled through the streets. The crosswalks were stones that kept the people from getting their sandals wet, but also showed the type of street. One stone for a one way street, two stones for a two-way and three stones for a major thoroughfare. I wonder how many stones there would be on Union Road? 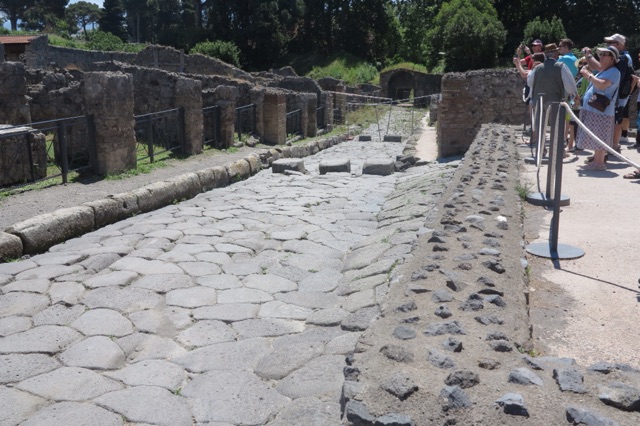 The ruins were fascinating. Pompeii must have been beautiful. The items that are still intact give just a snippet of the ingenuity that they employed. Just a few items – crosswalks, drive through restaurants, product branding and health clubs. As you can see in some of the pictures, they also used pictures or sculptures as signs since many people were illiterate or came from far away, especially the sailors. 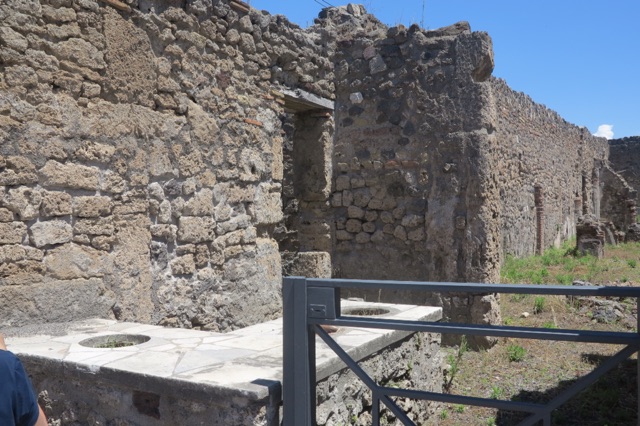 A couple funny things that our guide shared with us were phrases that may have started there:

There wasn’t plumbing as we know it, so much of the waste flowed downhill. Rich people lived uphill, poorer people downhill. The crosswalks were necessary to avoid stepping in the liquid waste. At night, the slaves would flood the streets with water and vinegar to help clean away the smell. Hence, those people were said to be full of “piss and vinegar”.

Along with the people of Pompeii, when foreign sailors came into town they were required o bathe and clean up first thing. 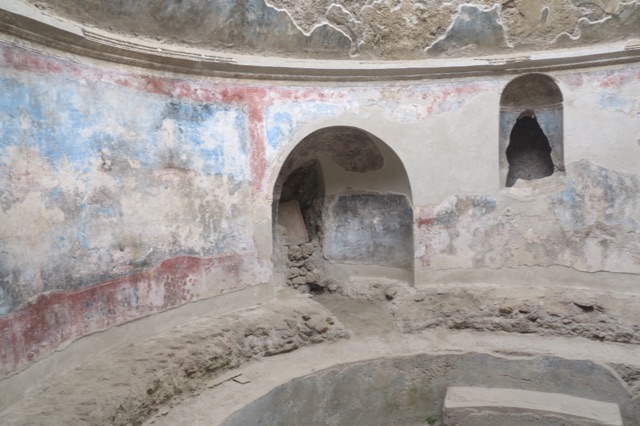 Their next stop was usually the brothels. As directional markers, there were phallic symbols carved into the street to show the way. As our guide said – “the first GPS – giant penis system”.

When they got to the brothels, the service menu was painted on the walls. And the price? About the same as half a glass of wine. 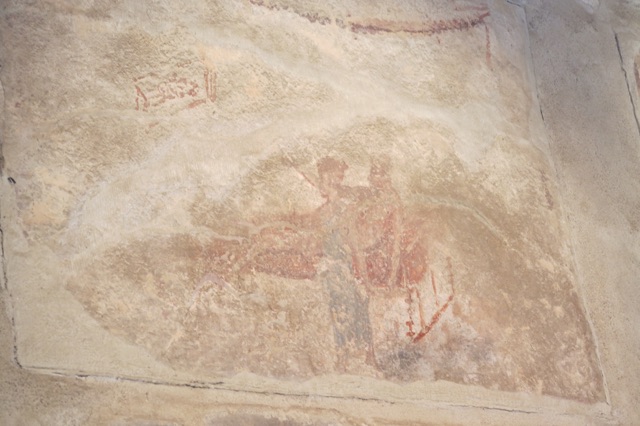 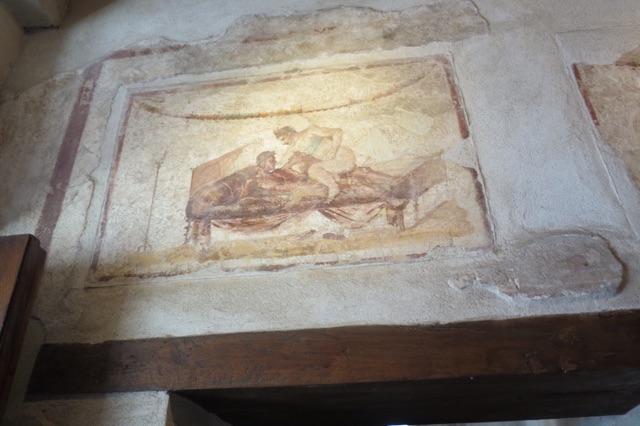 We also saw a recently returned plaster cast of a person who was buried during the eruption. It was sort of eery looking at the person and thinking about what it must have been like on that fateful day.

Only about a third of Pompeii has been excavated. The work continues, but the cost is high. They do take volunteers, so if anyone has an interest…

Heading back to the buses to get back to Sorrento was chaos. People took off their earpieces, so they couldn’t hear the directions. Others just wandered aimlessly looking for souvenir stands. Our group was all together except for the same two girls from the day before who dilly-dallied. We weren’t in a hurry to get anywhere, it’s just annoying when it’s the same people.

Traffic heading back to Sorrento was heavy, nearly at a standstill at some points. There’s really only one way in and out so everyone from the morning travel was just going the other way. We were the last stop for the driver and he was surprised when we told him he didn’t have to take us all the way to our hotel. The road is narrow and he would have to squeeze in and out.

Once off the bus, we took a little walk to get some water and soda for the room. On the way to the store, we passed a church where a wedding was getting ready to start. We hung out with a few others to see the bride arrive. The priest and groom’s family were mingling with guests and people were watching the time. When they started entering, we knew the bride was coming. She was pretty in a plainer gown, papa looked proud and happy. He even gave me a smile as they started to enter the church. Very nice to see a piece of every day life. 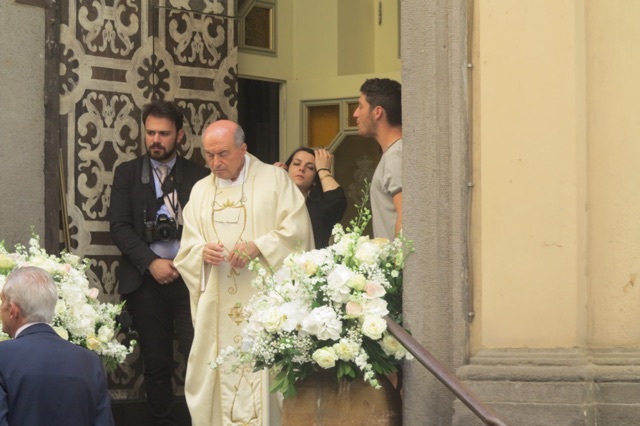 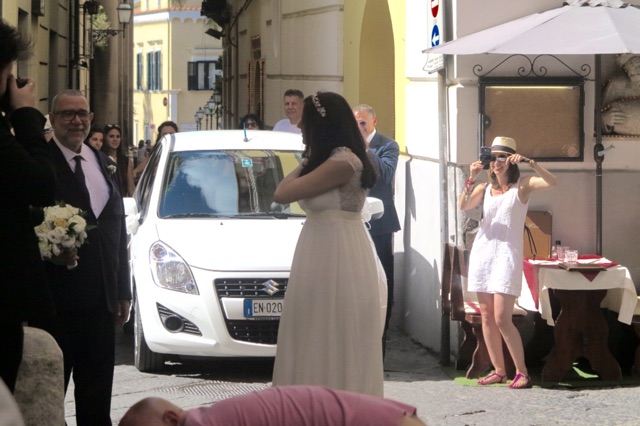 The bride is here 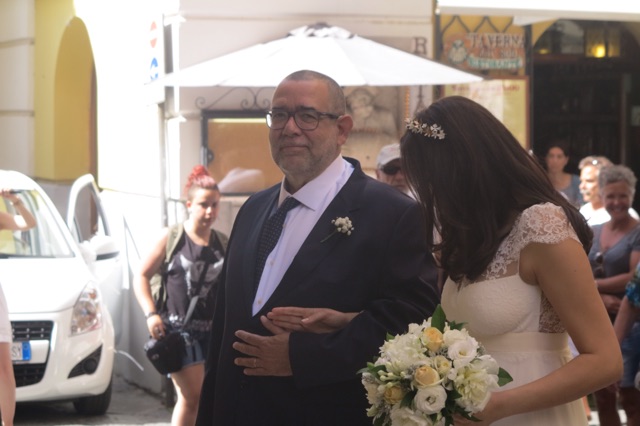 And away we go!

For dinner, we went to a small restaurant that was right across from the earlier wedding site. It was called Il Pozzo and was a pleasant little place. The food was good, the service was good and the prices were very reasonable. Our waiter seemed to like us; I suppose it had something to do with trying Italian and not griping about everything and hastily leaving. Why people can’t just go with the flow and enjoy the evening meal. Uptight Brits and Americans were the main grumblers. I digress.

Big smiles probably added to by the complimentary limoncello and we were on our way back to the hotel. A little music while uploading pictures and off to dreamland.

Like Loading...
This entry was posted in Italy and tagged History, Pompeii, Sorrento, Tour, UNESCO. Bookmark the permalink.