Woke up to our last full day in Sorrento. Everything has been just wonderful. The plan for the day was to just relax and enjoy the sites of the town.

If only those sniffles I had would have cooperated. Instead, they turned into a full blown cold. So while Sue sat on the balcony and enjoyed the view, I fell asleep feeling miserable.

Woke up later in the afternoon and we went out on to the hotel grounds to get a little fresh air.  There’s a pool, a lounge, lots of lemon trees and thankfully, lots of sunshine. 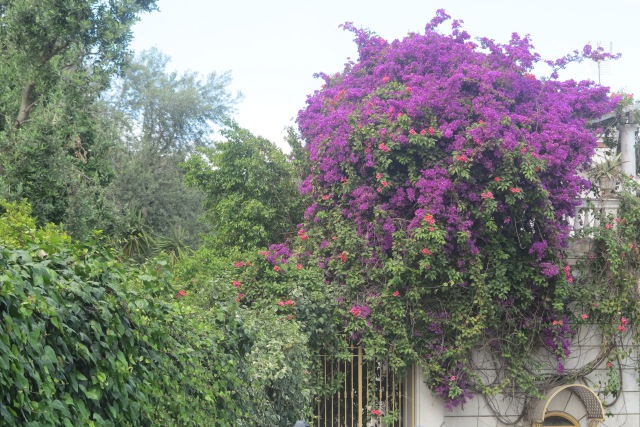 Dinner would be nearby, so we didn’t have to rush. When it was time for dinner, we went to a nice place called L’Antica Trattoria. It was down a little side street and was very pleasant. Our meals were delicious. Though there were plenty of tourists to be found, the restaurant is not a tourist trap. In fact, as the evening wore on, the patrons became mostly Italians. We were seated at a table next to a couple from Ireland, who seemed to be enjoying their dinners too.

As we were waiting for our desserts, an older man wheeled a younger man up near the restaurant, pulled out his mandolin and went inside to play for the patrons. Sue immediately identified the young man as having CP and when the older man returned to the outside, she went over to say hello. The man then played a couple of tunes by us and Sue and the woman next to us went over to chat up the two of them.

The woman from Ireland had a nursing job working with the same handicapped clients that Sue had, so a little bonding went on. We had a very nice time chatting with them before heading back to the hotel. Safe travels Michael and Theresa!

Despite my sniffling, it turned out to be a very nice evening and a perfect ending to our time in Sorrento.