After yesterday’s rain thwarted our sight seeing, today’s sunshine welcomed a day full of activity. Started out with breakfast overlooking the blue water below. Everything was excellent as anticipated. Elena’s marmalades were delightful and the fresh fruits from the garden helped fill us up.

Talking with Rafaele, he suggested that we take our boat ride first and then go up to Anacapri afterwards. The rains and breeze have the Blue Grotto closed and it could worsen, so we took his advice and set off for the harbor.

We headed up to the Piazza Umberto I so we could take the funicular down to the harbor. We got there at a good time as there was no waiting line. The fare is only 1.80 Euro each for a one-way ticket. The train arrived almost immediately, and five minutes later we were at the harbor. A ferry had arrived, so the line to go up on the funicular was very long. Timing, it’s all about timing.

We had decided to take the boat around the island, but as Rafaele had warned, the weather had the full ride closed down, so we took what they called the Red Line. The red line goes around the island to just beyond Marina Piccolo and back. It still gives you a look at the Faraglioni Rocks and several beautiful grottos. Tickets were 16 Euro each.

The boat was just leaving when we approached and they actually backed up to take us aboard. Great timing as the boat only contained about 17 people. We were able to comfortably sit and enjoy the sites and the water. 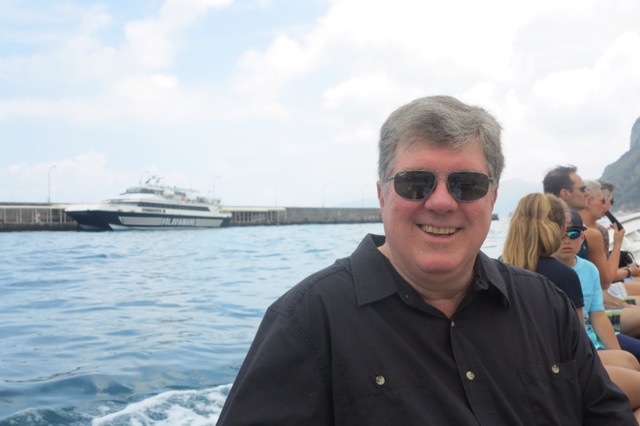 The water was a little bit choppy, but oh so blue. It’s actually more of a teal color with the sun reflecting off it. Our captain piloted us around the island, pointing out sights and moving into position for great photo-ops. There were a couple of large cruise ships anchored off the coast, one a regular cruise ship and the other a Club Med five masted sailing ship. 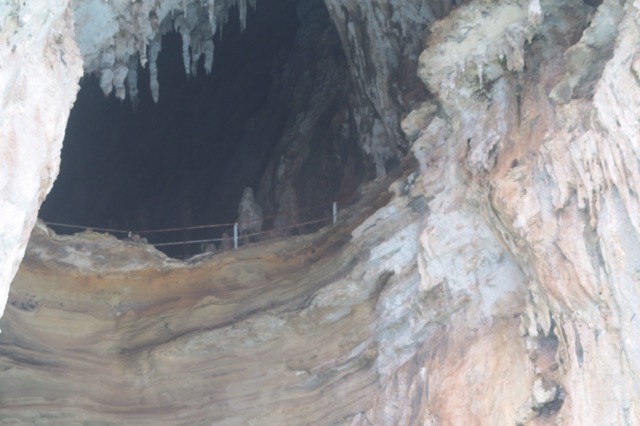 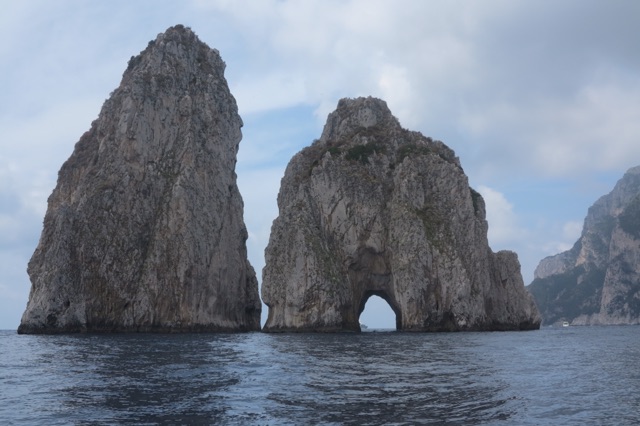 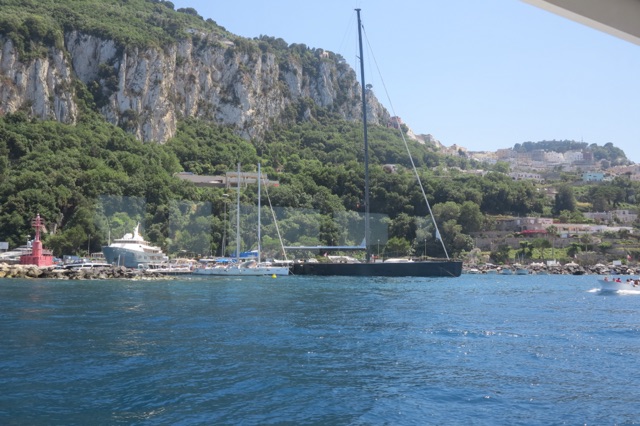 As our journey continued, we sailed towards the Faraglioni Rocks and arch – Natural features that rise out of the water over 100 meters. There is room for boats to sail through the arch and they say a kiss while passing under will bring lasting love. 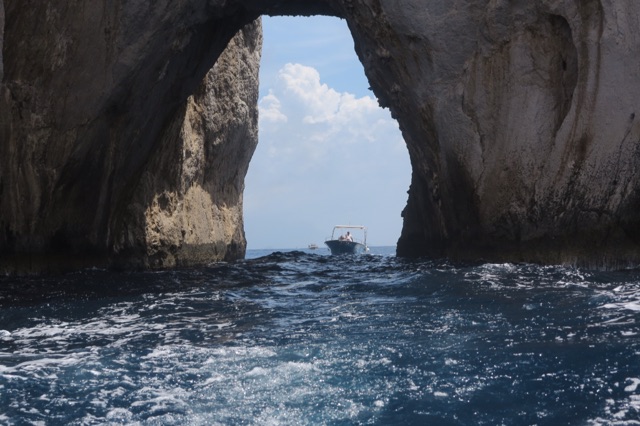 Passing through the arch

The captain approached and we did pass through, so now with lasting love I should be all set!

We sailed on a little farther before turning and heading back. Our return voyage took us back through the arch for those who missed out on the first go through and hugged the coast – giving the folks on the opposite side of the boat a better view.

Back at the harbor things had settled down a little bit. We had a nice view of town as we were pulling in and docking. Very enjoyable!

Once off, we headed to the ticket office for the ferries to see about reservations for our trip back to the mainland on Wednesday. The woman said none were needed for the 11:30 boat, so we hope she is correct.

Took a quick peek at the beach. Not too many people there, but I think the beaches away from the marina are a little more popular. 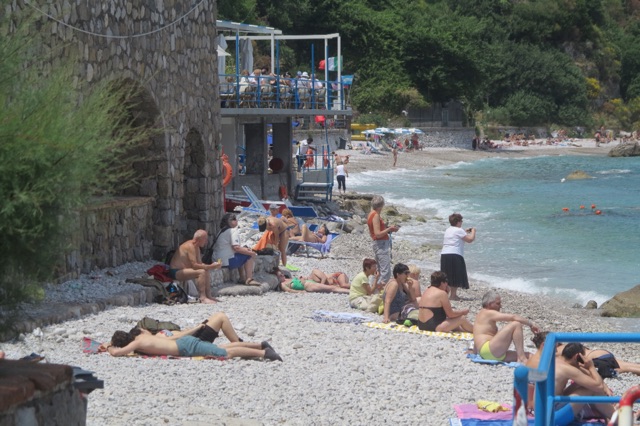 Eyeing the line for the funicular, we made an executive decision to grab a cab to go up to Anacapri. Sue negotiated a 25 Euro fare with a cabbie and off we went.

The taxis are topless, though today ours had a cloth sunscreen. It kept us from getting fried by the sun and blown apart by the breeze, so it was a welcome addition. The ride up provides some awesome views of the town and the harbor area. Our driver was pointing things out to us and then when we arrived in Anacapri, gave us directions to the top spots.

With Sue’s courage at an all-time high, we decided to start with the chairlift ride to the top of Monte Solaro. The ride is 11 Euro each round trip and takes about 13 minutes to get you to the top. From the top, the term ‘bella vista’ must have been coined because it was beautiful.

So the chairlift is an individual chair with a lap bar for safety. The ride is a slow, gentle glide to the top at a height of about 1800 feet. Along the way, you skim over tree tops and vineyards with a great view. Sue, who is not a fan of heights, kept hold of the bar as we rose, while I was swinging my feet and taking pictures. It was like the sky ride at Crystal Beach, except much, much higher.

Once at the top, we were actually in the clouds. Quite exhilarating and quite beautiful. The clouds would drift by and it would be a little chilly, then they would move on and the sun would shine.

We walked all around the peak taking pictures and loving the view. There is a little snack bar at the top, so people were sitting at tables enjoying a beverage and the view. 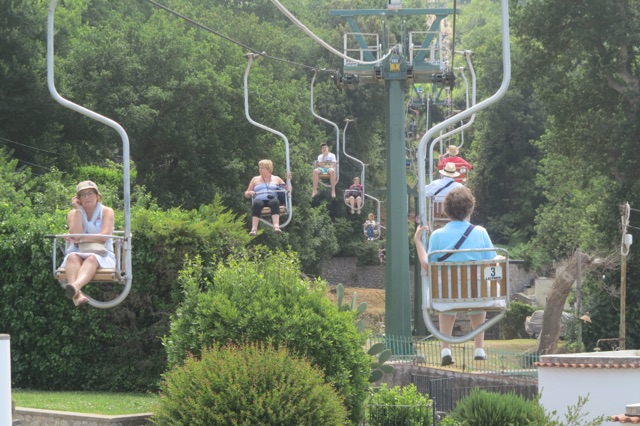 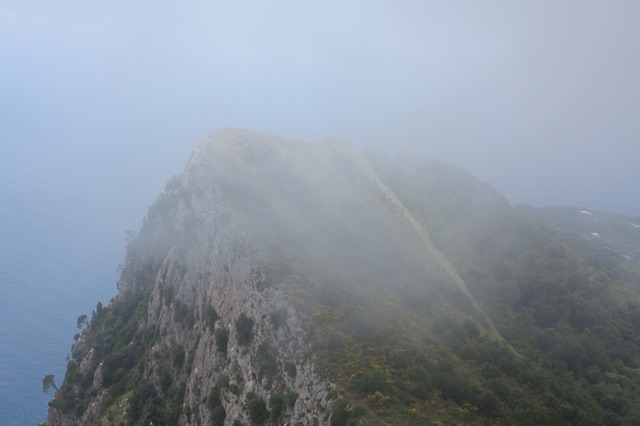 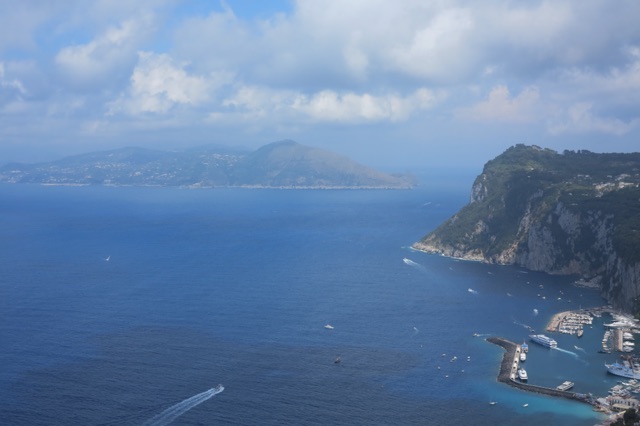 Views to the Marina

By the time we were ready to go back down, Sue was a chairlift pro. She was waving, talking and only clinging with one-hand.  The descent provided the same beautiful views as the ascent. In no time at all, we were approaching the station where you hop off the ride. Lots of fun and a personal triumph for one of us!

Our next stop kept us grounded. We walked over to the belvedere by Villa San Michel for what was promised to be a wonderful view of Capri and the harbor. Know what? They kept their promise. The views were spectacular.

Next stop, back to the main piazza to get to the Church of St Michael. A lovely walk through another part of town took us to the church. The church looks rather ordinary from the outside, but inside, the floors are painted tiles with the biblical scene of Adam and Eve being cast out of the Garden of Eden by the archangel Michael. It was beautifully done and there are platforms that you walk on so as not to walk on the floor itself. There is a spiral staircase that takes you to the organ loft for a full view. Very beautiful. 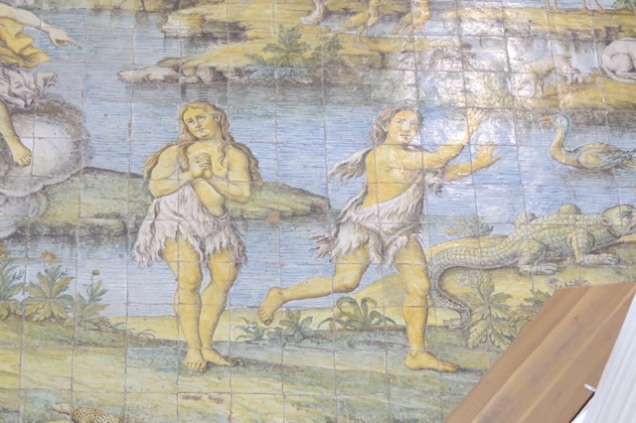 After leaving the church, we decided that we needed a little something to eat. We walked by many places until we came to a place playing great jazz music. We knew it was the spot for us. Besides being super-friendly, the food was excellent and the glasses of Prosecco were definitely non-management pours! Salads, pizza, Prosecco and a carafe of Rose’ wine and we were happy as could be. 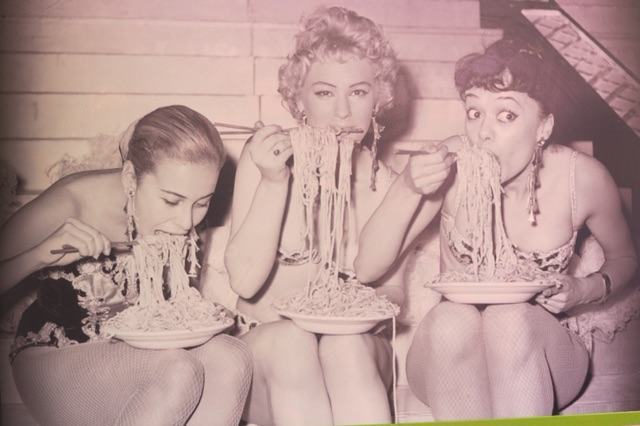 Next stop, the hotel. Grabbed a cab and had him take us down to the roundabout in mid-town. We stopped at a local market for some snacks and tissues, then headed back home.

Did a little pre-planning for Rome and then just relaxed until bedtime. Great day!

Like Loading...
This entry was posted in Italy and tagged Anacapri, Boats, Capri, Sites. Bookmark the permalink.