Today we leave Capri and head to Rome for the last leg of our journey. We woke up early to clean up and get packed before breakfast. It was a nice, sunny morning so we could enjoy breakfast outside on the garden patio.

Saw Sura and he was actually sad that we were leaving. Since there weren’t many people yet, we had a chance to chat with him while we were eating. He’s such a genuinely nice person. He loves to hear about the places that people visit from and to talk about his wife and children back in Sri Lanka. We will miss him too!

Back to the room to grab our things and check-out. Rafaele took care of us and called for a cab. He and Elena were wonderful hosts. He was really happy when we told him that this was like staying with friends, not staying in a hotel. That is the concept that they are trying to achieve. We would definitely recommend it to anyone going to Capri. With that, the cab arrived and we said goodbye.

Next stop is the harbor to catch a boat to Naples. There was no line at the ticket office, so we were able to buy our tickets and get to the dock with plenty of time to spare. We’re taking the 11:35 am high speed ferry, that will give us time to mosey to the train station for our 3:00 pm train.

The ride over was great. Besides speeding along on fairly calm seas, we met a younger couple who were also heading to Rome. We chatted the whole way over about travels and found out he is an author – Adam Van Susteren. We subsequently learned that he and Ann had just gotten married over Memorial Day weekend. Congrats!

When we arrived, we grabbed a cab to head to the train station. Our cab driver got us to the station ‘rapido’, but was a psycho. I think he would have flattened a baby carriage if it was in his way. Yikes!

The train station in Naples was reminiscent of Platform 4 in Ferrara. The people rushing to and from their trains were fun to watch, but there were plenty of shady characters that we kept our eyes on and kept at a distance. It was such a relief when our train pulled in and we boarded. The hour of sanity before arriving in Rome was very much needed.

When we did arrive at Roma Termini we were both surprised – pleasantly. The station was pretty calm and was easy to maneuver through. We headed out and were able to directly get a taxi with a driver who was a nice guy. Rome was not what we were expecting – it was way better.

We drove past many places that we have heard about on the way to the hotel. Our hotel is literally right next to the Pantheon. The large Piazza del Rotonda also has a fountain and obelisk and seems to be a gathering place for people. The Piazza is surrounded by restaurants and shops and hotels – this should be fun.

Referring back to my previous statement, we were headed to Rome hearing about the high crime rate and beggars everywhere. Watch for scams, hide your valuables… I’m sure it’s here, but so far we’ve seen older buildings and historic places. In fact, the main street over had us thinking of Paris. 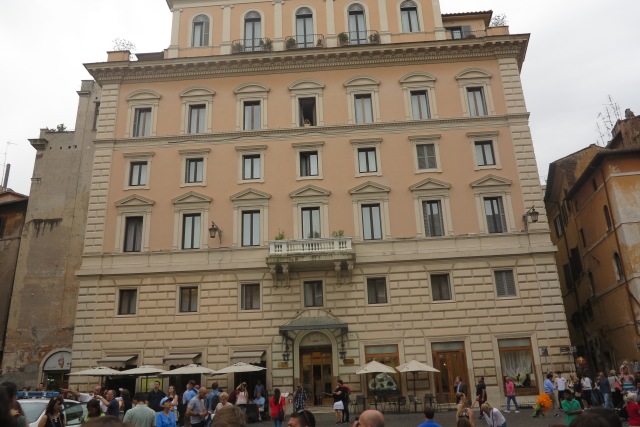 Back to the hotel. It’s called the Albergo del Senato and came highly recommended. The location is awesome and it looks nice from the outside. We were greeted warmly and the front desk staff is very friendly. They were waiting for us and it only took about five minutes to check-in.

Peek at the Front Desk

As Tiffany was showing us the way to the elevators, she even wished us ‘Happy Anniversary’. Our room is wonderful. It’s located on the first floor (2nd in the US) and overlooks the Piazza and the Pantheon. It’s spacious, has a nice bathroom, separate closet and.. a comfortable bed. Very nice! 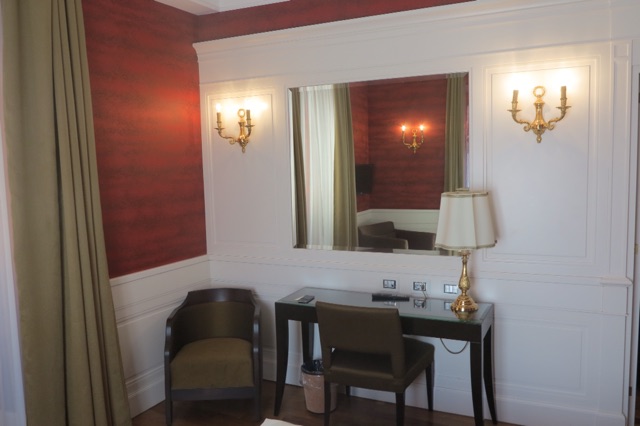 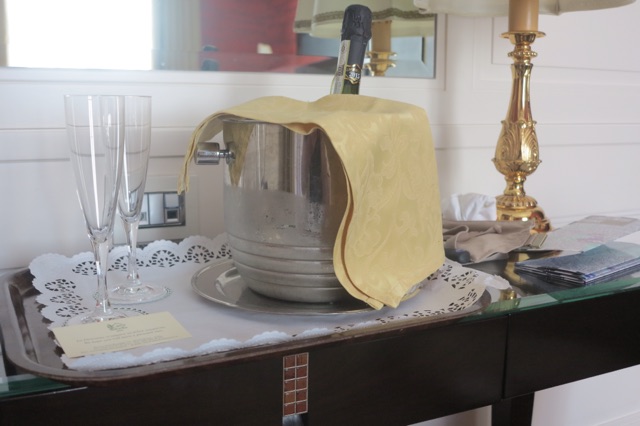 Being us, we both immediately went for the windows and opened them to see the view and hear the world. Not bragging, but this makes it eight out of eight for hotels this trip. They’ve all been different, but they’ve all been wonderful.

After unpacking and chilling for a little while, we asked the desk if they could recommend a place for dinner. We had a couple names written down and they quickly scratched off one. They said they would call for us. In the meantime, they also sent up a bottle of Prosecco as a little anniversary present. Nice touch.

The place we ended up was called Osteria di Sostegne. It was less than five minutes walk from the hotel and is just a small place with good food. Actually, they are a small restaurant with excellent food. The menu had so many choices, it was hard to decide. We both chose wisely though and had great meals. Sue had a linguine with pecorino cheese, sage and black truffles that was one of the best dishes we’ve had all trip.

Bottom line, we made reservations to go back Sunday evening.

When the moon’s in the sky….

We walked back to the hotel. The piazza looks awesome lit up with the moon over the Pantheon. First impression – I think we’re gonna like Rome.