First day in Rome, so we wanted to get the lay of the land. Usually, we’d try the Hop-on Hop-off bus, but today we decided to walk around. Since we have to meet up with our tour group early tomorrow, we thought we’d try and find the meeting spot.

The Pantheon crowd was just starting to line up as we made our way out of the Piazza. We passed by St Eustache Church and noticed not only police, but soldiers with full gear hanging out. Down another street and we ended up at Piazza Navona.

Piazza Navona has one of the famous Bernini sculptures as its centerpiece. The fountain is called “The Four Rivers” and represents the Ganges, the Nile, the Danube and the Rio de la Plata. There are two other sculpture fountains at either end of the Piazza. 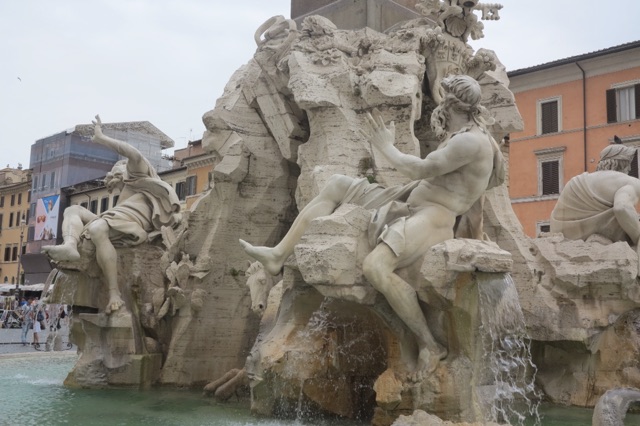 Leaving the square we headed in the direction of the Tiber River and the Castel Sant’Angelo. We walked across the Bridge of Angels towards the castel.

The Castel was originally designed by Emperor Hadrian as his tomb. It later became a fortress and prison when Rome fell. When the archangel Michael appeared above the structure, it was renamed Castel Sant’Angelo and was later connected to the Vatican by a secret corridor. Continuing forward, the dome of St Peter’s came into view.

The road leading up to St Peter’s Square is actually quite long. Lots of shops along the way and touts every few meters trying to sell you tours or skip the line tickets. If you add in a few street vendors and beggars the picture becomes complete. This year’s hottest street item is the selfie stick. 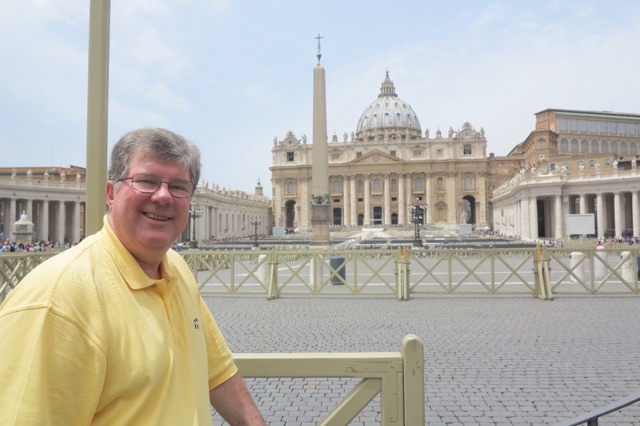 We walked up to the start of St Peter’s Square, took a couple pictures and then headed over to find our meeting place. Very easy to find and even we won’t need bread crumbs to find our way back.

Took a nice easy walk back towards the hotel. It was definitely getting warmer, so a little lunch and a cold beverage was called for. We stopped at a small outdoor cafe and had a bite to eat before heading back to the hotel. Downloaded some pictures, charged up some gadgets and took a little nap.

Later we found a restaurant not far from the hotel for dinner. As we were walking by, one of the owners said “Hi, good to see you again”. It was either mistaken identity or a clever ruse, but it worked to get us in. Glad we did stop there as the food was excellent.

Afterwards, it was just a short walk back to the hotel to get to bed early. We need to be back at the meeting spot at 7:15 am. Talk about miracles.