We’ve been looking forward to today’s tour, though after all the walking the last few days my legs aren’t as excited. Being fans of Dan Brown, today we are taking the “Angels and Demons” Tour.

We will follow the book version of the story and see the places that were part of the story and learn some of the history behind each place. With the story in mind, the Angels will point the way on our path of enlightenment as we trace Professor Langdon’s and Vittoria’s steps. The altars of science await.  Our guide Robert will lead the way.

We start in the Piazza del Popolo or Piazza of the People. Here we find the Church of Santa Maria del Popolo. Inside is the only crypt that was designed by Bernini. We see the “Devil’s Hole” or entrance to the crypt. Above we see the Angel in the sculpture pointing. 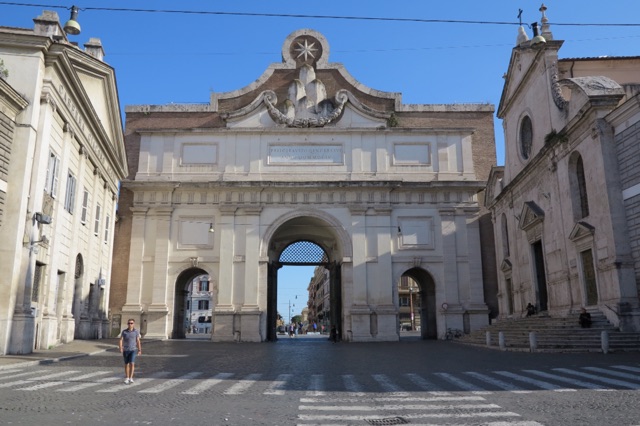 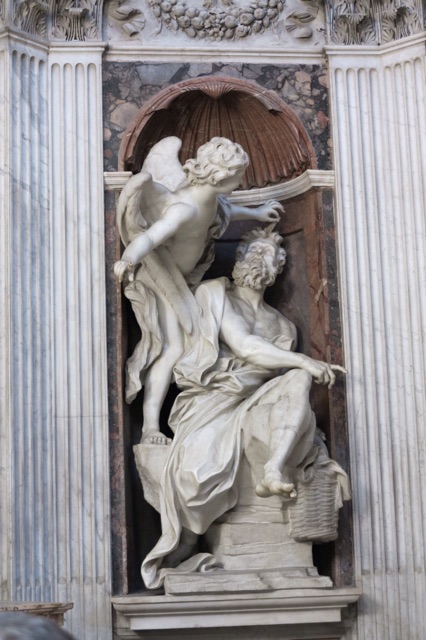 Having been too late to save the first Cardinal, we must find the next stop on the path. Professor Langdon spotted the next marker, so we were off to St Peter’s Square. They were once again too late to save the Cardinal, but we find the plaque on the ground of the Angel blowing wind towards the west. The outer square with its columns and carved Angels was designed once again by Bernini. 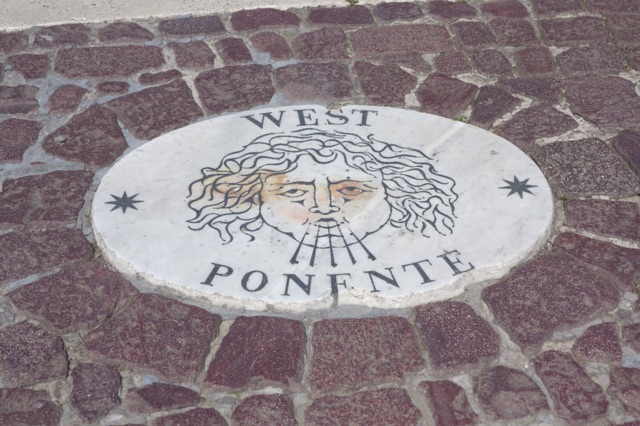 We follow the direction of the Angel’s winds and head towards the church of Santa Maria della Vittoria. Inside, there is another Bernini sculpture, said to be his favorite, called the “Ecstasy of St Theresa”. The statue is beautiful and the emotions are quite evident on the faces of St Theresa and the Angel. Unfortunately, Langdon and Vittoria were once again too late to save the third Cardinal. But the arrow points them on.

The tour has been part walking, part motorcoach, but now we will walk the finale. Before doing so, we stop for a much needed Gelato break. The break is in the Piazza del Rotondo, which just happens to be where our hotel is located.

For those who have read the book, the first church they stopped in was the Pantheon, but it turned out to be the wrong place. That was when they sped to Santa Maria del Popolo.

In the book the time is growing shorter and the fourth Cardinal is in peril, Vittoria has been kidnapped and Langdon is beside himself trying to find the last stop. Then he remembers, “Water”, where else could it be besides the most famous of Bernini’s sculptures – “The Four Rivers” in Piazza Navona.

The sculpture is beautiful and very large. In the book, a black van drives up, the back doors open and a body is dropped into the fountain. Here, there’s just water pouring down with the crowds all around. Too late for the Cardinal, but there is still Vittoria to save and the overall theme of the book.

Next stop, the Castel Sant’Angelo or Castel of Angels. You walk across the bridge of Angels and enter what is now a museum. It was originally Hadrian’s Tomb, then taken over after the fall of the empire, but in the story it plays the role of hideout for the assassin and, of course, the secret passage to the Vatican. For us, the story stops here. 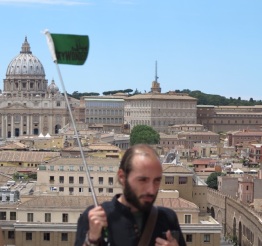 This was really an interesting tour. Roberto or Robert was extremely knowledgeable about the book and all the sites along the way. Funny listening to him take exception to the differences between the book and movie. He made it fun re-living the story – even without the assassin or explosions. But you don’t need them, that’s why we have imaginations.

After the tour we walked back to the hotel and rested for a while. We have dinner reservations at 8:00, so we have plenty of time to relax.

Dinner was once again scrumptious. We had been here before, so we knew the meal would be good. We had different servers this evening and they were equally delightful.

Had fun with our bad Italian, while being coached by our waitress. She seemed excited by our exuberance and when she came back with a top off to our limoncello, she won our hearts.

Quick stroll back to the hotel to get the camera and then a romantic stroll over to the Trevi Fountain.

Lots of people hawking fake purses, Rolex watches and all sorts of stuff, but then the sounds of the fountain’s waters caught our ears. Around the bend, in all its splendor was the Trevi Fountain. The restoration was awesome as its marble gleamed under the lights.

Very beautiful! We maneuvered our way to the front of the fountain and then down next to the rail. We both tossed our coins into the water with the hope of returning to Rome once again. 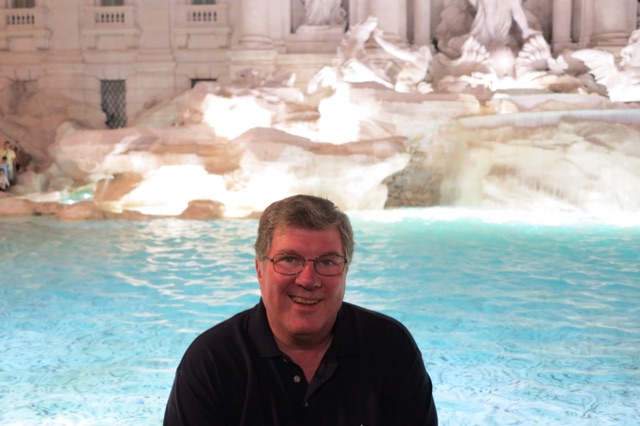 A nice walk back to the hotel ended our evening and we were both ready to go to sleep after a long day. Tomorrow we can sleep in and pace ourselves.

Like Loading...
This entry was posted in Italy and tagged Art, Rome, Sites, Tour. Bookmark the permalink.