Hard to believe but today is our final day in Rome. After all of the walking tours and exploration of the city for the past few days, we decided to make today an easy transition day. We slept in until 9:00 which felt decadent, then took our time getting ready to go. It was actually almost 11:00 before we left the room.

We stopped down at the front desk to make arrangements to get to the airport tomorrow morning. With security, they are recommending that you arrive two and a half to three hours ahead of your flight. So with a 7:00 am pickup, we now had boundaries.

So our first and only stop of the day was at the Pantheon. It was our first stop when we arrived in Rome and now that we knew more of the history, we made it our last stop. this time I also had my camera. 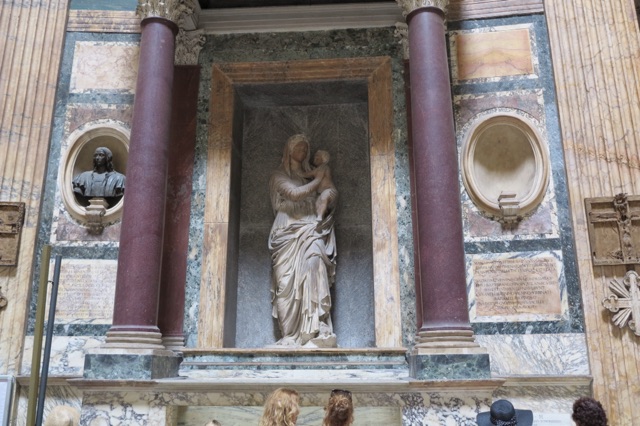 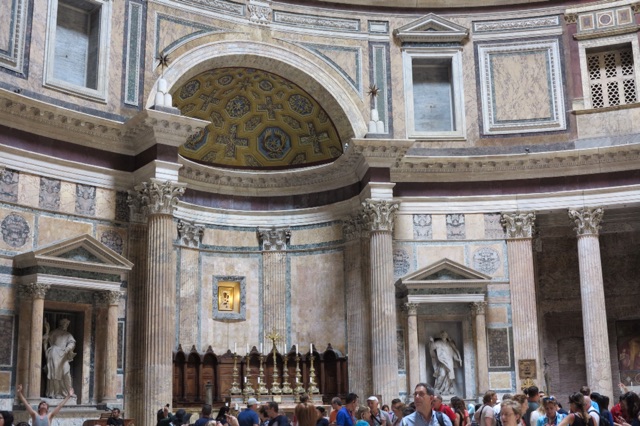 It really is an impressive structure, especially the dome with the open oculus. It was originally built as a pagan temple to all Gods before becoming a Christian church. The three main tombs located inside are of Raphael, Umberto II and Vittorio Emanuel I, though most people just come to see the “ancient building and dome”.

After walking around for a while, we decided to have a nice lunch and then just grab something quick later on. We tried a recommended restaurant, but it was closed on Monday, so we ended up going back to one of the restaurants we ate dinner at. They were open and they remembered us. 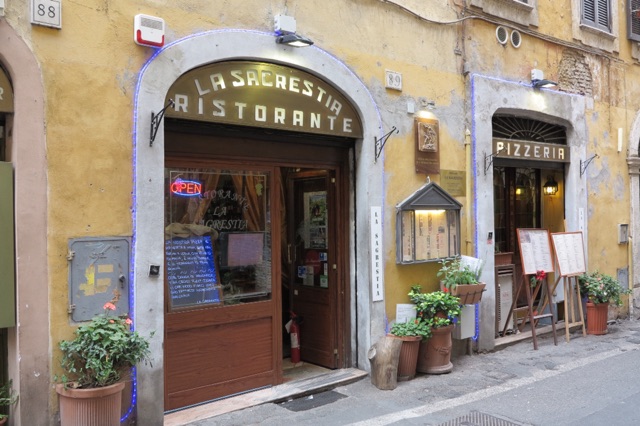 We ended up having a lunch that was really a dinner. They don’t change the portion sizes for lunch. We both had a delicious pasta dish and then we split a pizza. We topped it off with a nice bottle of Rose’ wine and had one heck of a nice meal.

Just before we were gearing up to leave the restaurant, it started to rain. No, make that pour. We were able to scoot close to the buildings and then make a ten second dash to the hotel door. We both still got drenched in that short time.

Going back to the room, we were able to open the windows and watch the rain pour down for a good part of the afternoon. We even snuck in a couple of little naps. When dinner time arrived, we both agreed that we were still full from lunch, so we just relaxed and read and blogged for the evening.

Tomorrow will be an early morning, so we went to bed early after listening to our opera buddy for a little bit.