Woke up, ate our breakfast and then set off to the train station.  Our destination today is the town of Zaanse Schans.  It’s a historical town with windmills, cobblers, bakery exhibits, cheese and much, much more. 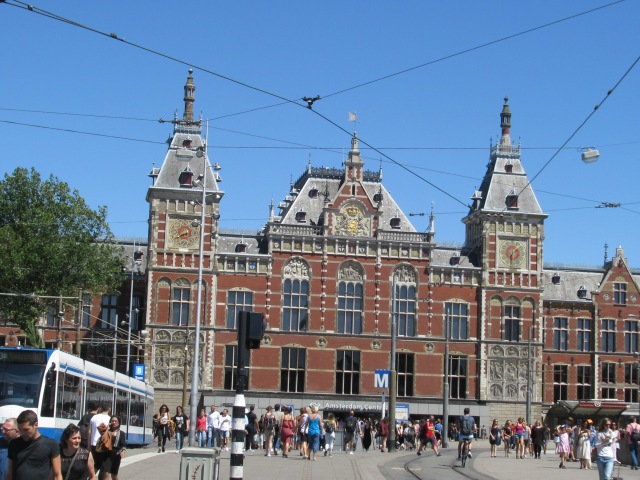 We arrive at the train station, go to a ticket machine, enter our destination info, and then pay by credit card.  Hmm, credit card is rejected.  Cancel the transaction and voila – credit card not returned.  As the panic sets in, Sue finds two workers who try to help.  After a few minutes, the woman is able to retrieve my card.  Dank u wel,  dank u wel, dank u wel……

So, next stop is the ticket desk.  In just a few minutes, we have our tickets and head over to the train.  We check the schedule board and don’t see a train for almost an hour and a half, though they are supposed to run every half hour.  Since it was now almost 1:30, we decide to eat the cost of the train tickets and take the bus.

We saw that there was a bus coming in 11 minutes, so we hurried to the gate.  Just a few people waiting, so no problem getting on, except for the fact that the buses are on strike and running erratically.  A young man at the gate explained the strike scheduling problems and also knew that the trains were not running on time because of track work. Now they tell us! 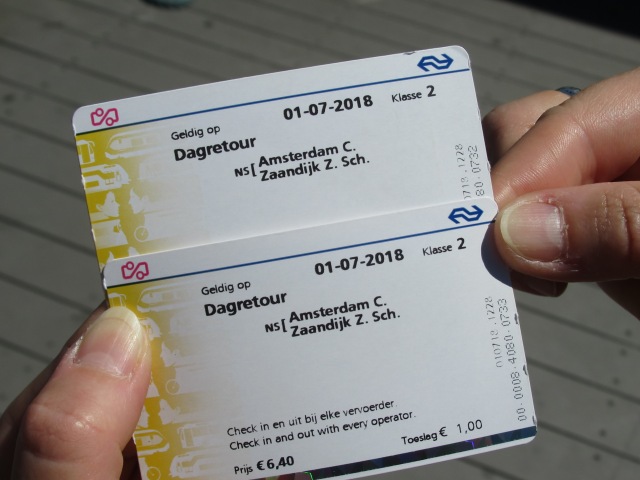 In true Herkey fashion, we said “screw it – boat ride!”

The boat docks are just across from the train station, so we follow the crowd.  You see some interesting sights on a weekend in Amsterdam. 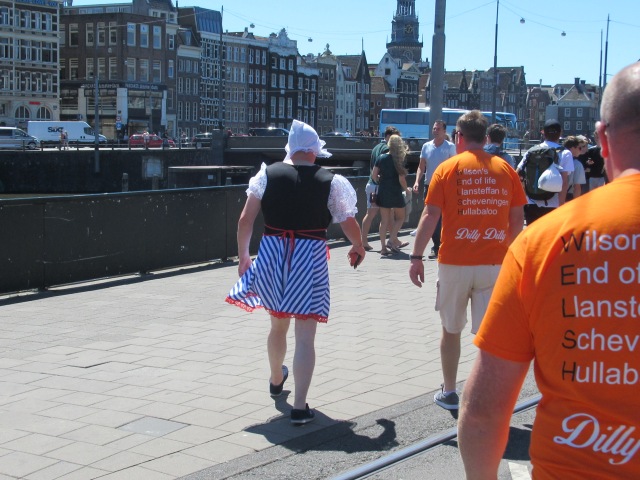 Not sure if he lost a bet or is looking for work in the redlight district.

We went back to the same Open Boat Company as yesterday.  This time, under ‘Skipper Bart’, we took a different route and enjoyed the mostly serene ride.  Mostly serene because there was a lot of traffic on the main canals today. 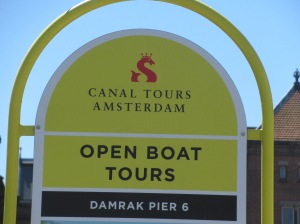 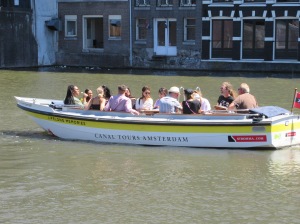 Skipper Bart was knowledgeable and hilarious.  He explained some history, related some anecdotes and wasn’t afraid to talk in adult terms about issues. The best was when he explained about the drunk guys in the Redlight district who often relieve themselves in the canals and wet all over the top of the canal walls.  He told us this as a warning about sitting on the walls or eating lunch there.  He then proceeded to wave, smile and laugh at all the people who were sitting there. 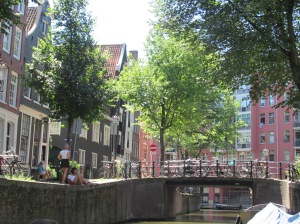 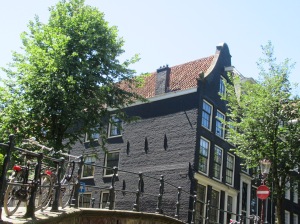 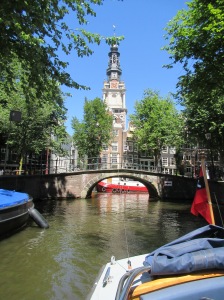 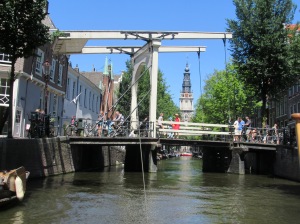 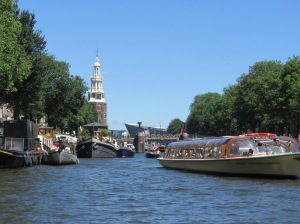 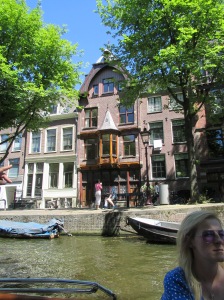 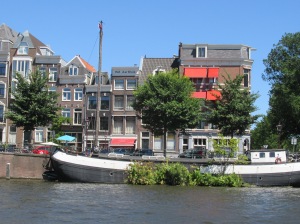 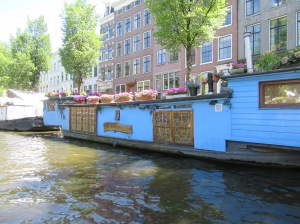 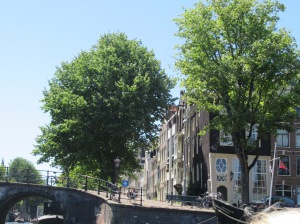 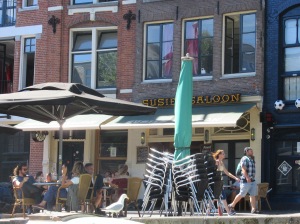 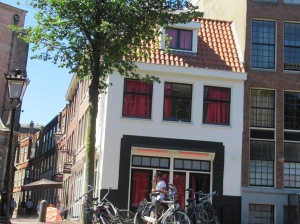 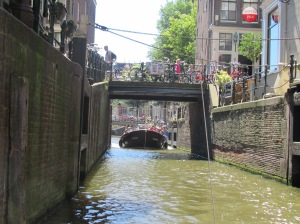 We took the tram back towards our hotel and then found a cafe wth table in the shade – rosé wine and gin & tonics came next.  Once our thirsts were quenched, we stopped by a small bakery for a nut cookie and an almond cookie.  Both were delicious. 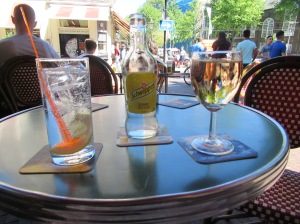 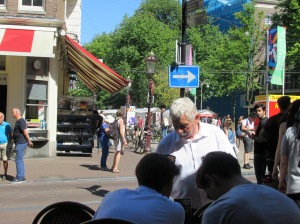 Dinner is at 8:30 tonight.  We thought we would be away for a good part of the day, but alas, that didn’t quite work out.  So we rested up before getting cleaned up.

Our dinner is here at Brasserie Ambassade.  When we arrived, they ushered us over to a prime table overlooking the canal.  It was really romantic with the lights glistening on the water and the sun easing down below the roofs of the buildings.

Our previous server and wine expert from the other evening, Reink, had kept the table for us and was pleased that we were excited to be back.  He couldn’t wait to help us with the wines.  Tonight’s server is from France and grew up in Avignon.  Sue ordered and he responded “merci”. Seizing the opportunity, I ordered in French and he was blown away.  I had a new friend.

We saw Reink peruse our order and then came over with the wine list.  I had two choices in mind and one of them was also his recommendation.  We went with a Barolo, but a lighter one that would perfectly pair with our meals.  Sue selected artichokes as a starter, braised beef cheeks as her main and the crepes al’orange for dessert.  I had a warm goat cheese and fig salad, followed by a flat iron steak with frites and a Creme brûlée for dessert.

Everything was delicious and sensibly portioned – we’re still walking off our Italian dinner.  A few handshakes and hugs and we were on our way back to the room.

Like Loading...
This entry was posted in Europe, Netherlands and tagged Amsterdam, Boats, Meals, Trains. Bookmark the permalink.