Our last day in Zürich was a lazy one.

We went out for a walk in the morning, mostly to let the maid clean up our room. The hotel lobby was bustling with people checking out and others trying to check in early. We had no particular plans and my back was a little sore, so we decided to just hang out in our room for a while.

Checking the weather for Lucerne, it looks like we will be dodging thunderstorms again. It appears that they pop up later in the afternoon when the temps rise, so we’ll probably have to visit the mountains early.

Checked the train schedules and then put the tootsies up for a little bit.

Dinner today is at a seafood restaurant called Bianchi. It’s just a five minute walk from the hotel and as we were getting ready to leave, the sun came out. Looks like it will be a nice afternoon and evening.

The restaurant is really nice and since it is early, it’s also fairly empty. Lots of great choices on the menu – it’s gonna be hard to decide. Our waitress is Wunderbar!

We ended up choosing a starter of pasta – mine was pappardelle with salmon in a cream sauce, Sue’s was ravioli filled with veal in a butter sage sauce. Both were delicious. The second course was sea bass with black rice and spinach. Again, both were delicious.

We truly could have stopped after the first course and been happy. There was also breadsticks and a nice bottle of Swiss wine – Les Claives Petite Arvine. I do wish this wine was available in the US; it was wonderful. 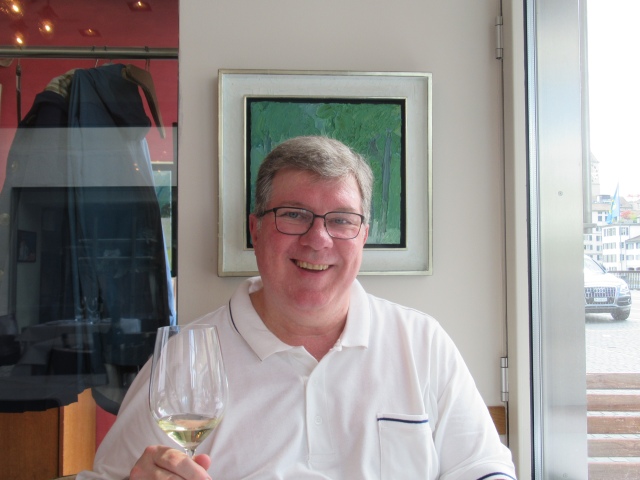 We took a nice stroll along the river before heading to the hotel.

We packed, updated our paperwork and then settled in for a good night’s sleep. Tomorrow we travel to Lucerne.