Day 22 – Strolling through the streets of Zermatt

It’s our last day here, so today we’re walking around Zermatt to see a little bit of the town. Everything I read about is centered around the Matterhorn and skiing, but the town is really charming and deserves to be explored.

From our hotel we walked down the street until it connected to the Bahnhofstrasse, which is the street where the railway station is located.

Just before we reached the Bahnhofstrasse, we came across a church with a mountaineers cemetery. It’s sad to see that the age of many of the people laid to rest is 20-something. That age of invincibility didn’t pan out for the adventurers. It’s also surprising to see that most of them died descending the mountain and not ascending. 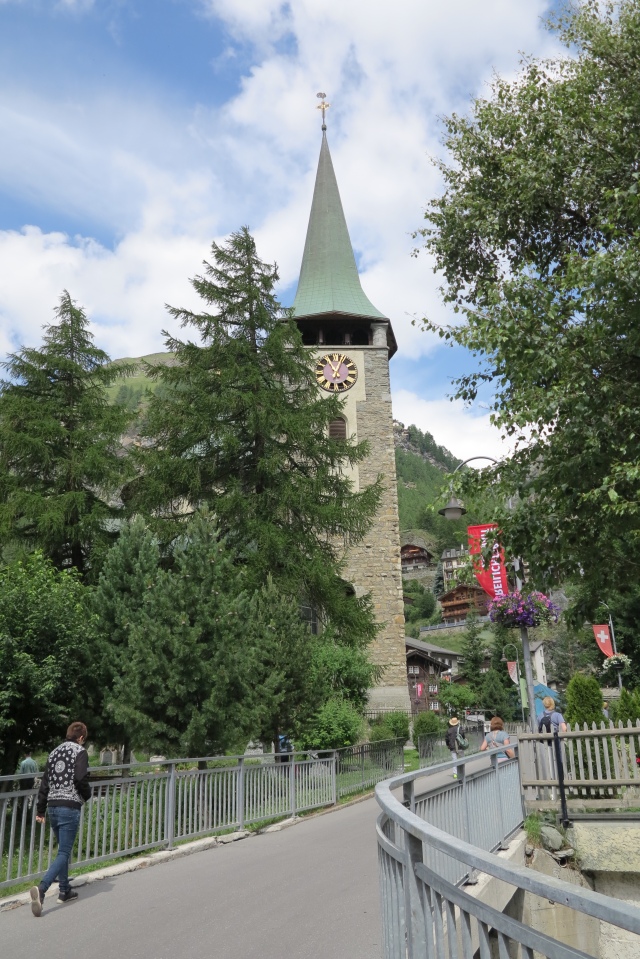 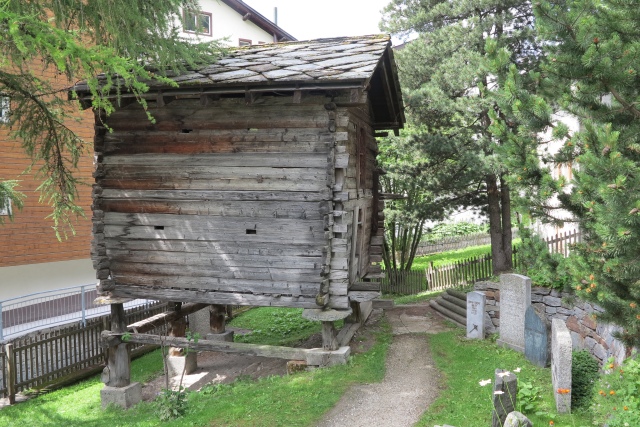 At the corner we saw three Alphorn players carrying their instruments down the street. Given the size, I would definitely volunteer to play the triangle in that band! 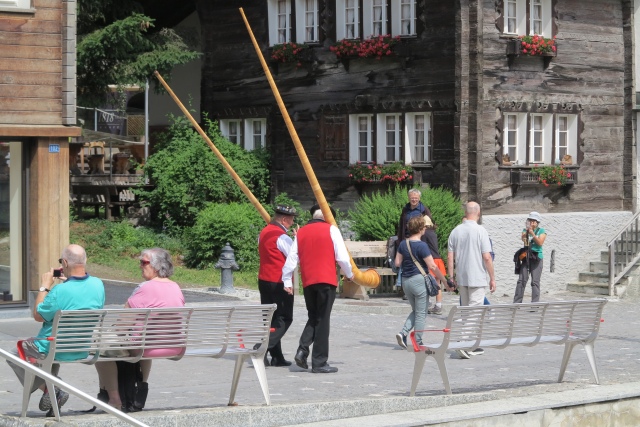 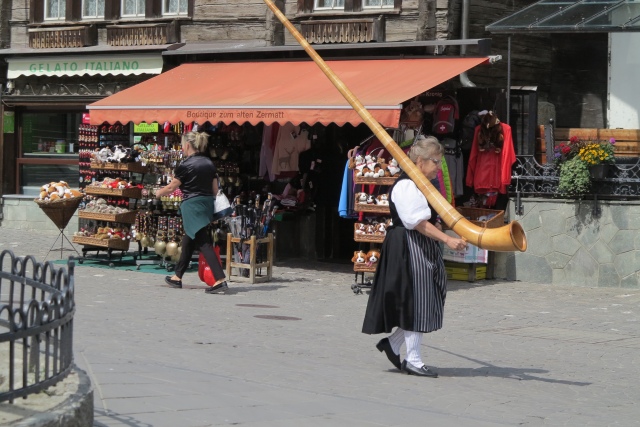 The alpine styling of the buildings combined with the mountains in the background is something to behold. You really feel like you are walking through a storybook town. 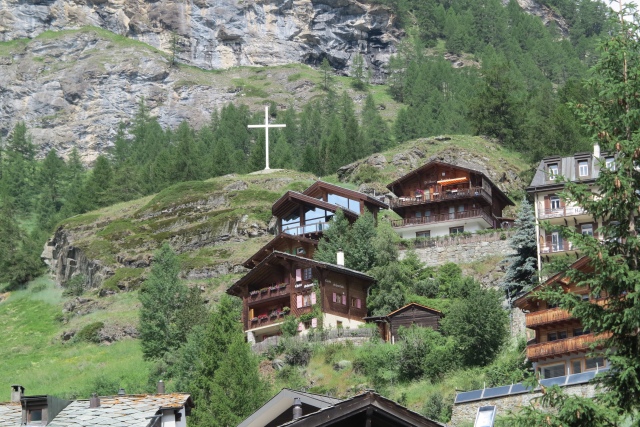 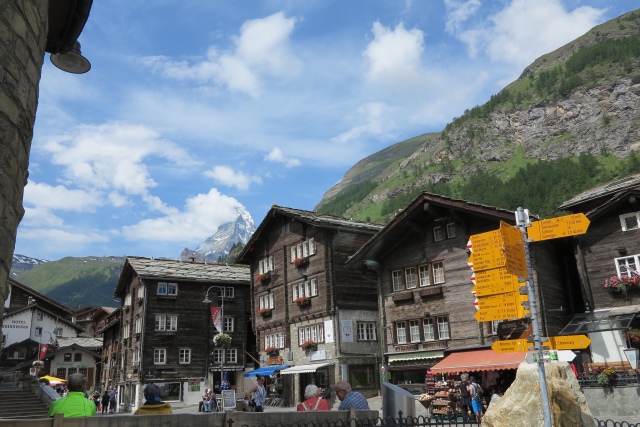 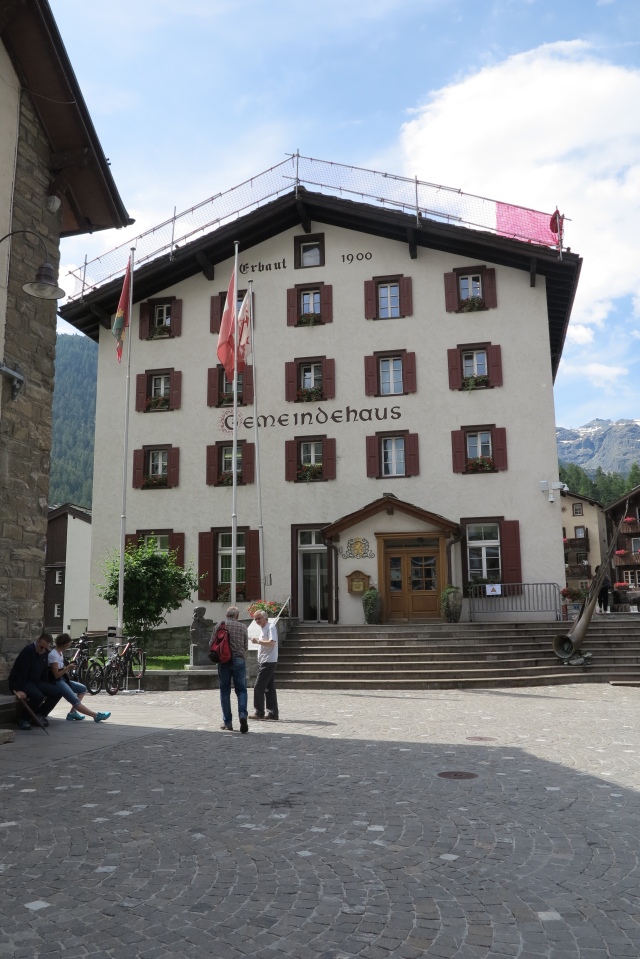 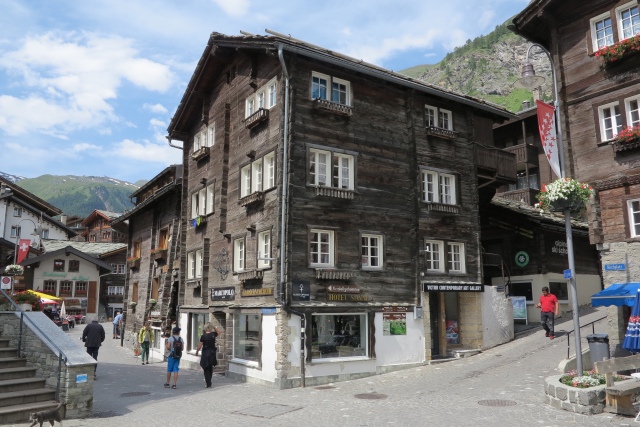 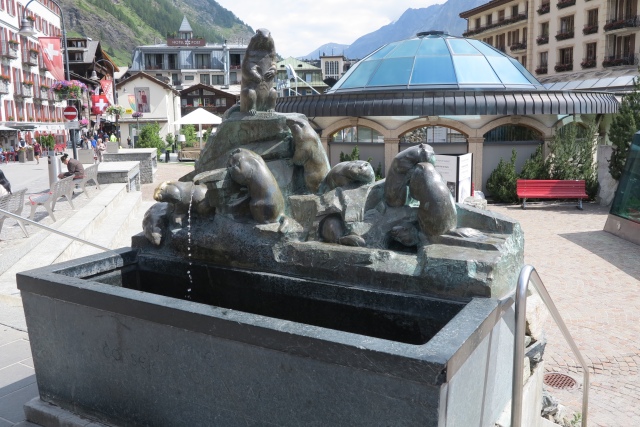 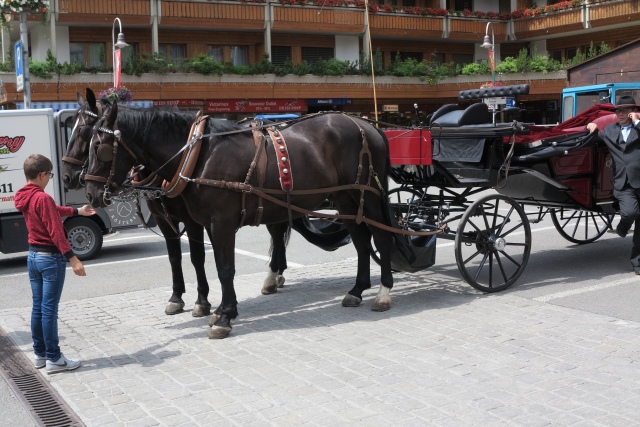 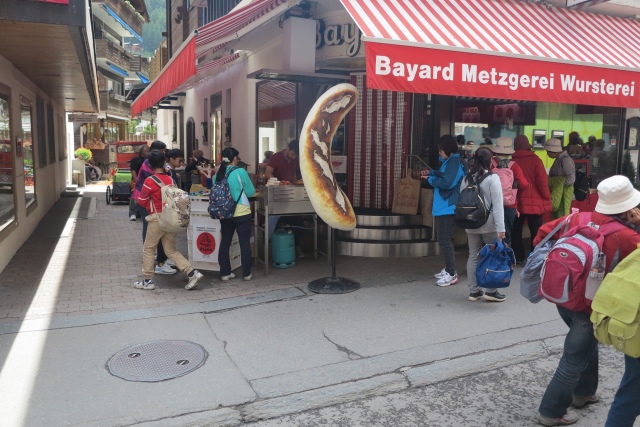 We walked down the street checking out all the little shops and doing some major people watching. After stopping in many little shops, we found one that had some perfect souvenirs. We ended up buying two Christmas ornaments and a small cowbell. Sue has promised not to make me wear the bell so she always knows where I am.

Next we stopped at the Gornergrat railway station for a picture with Wolli. 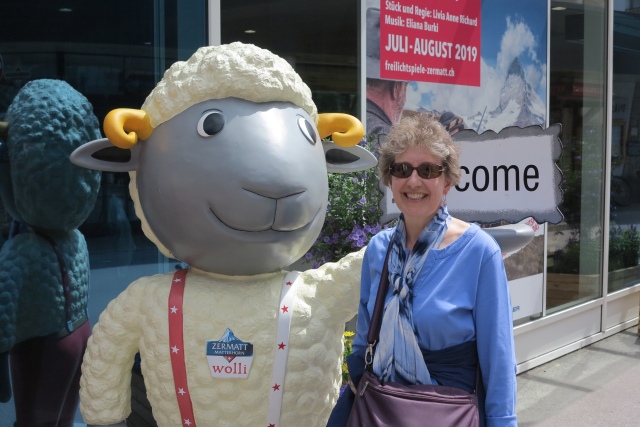 We also stopped at the Laderach Chocolate shop. Just a step through the doors and you hoped it will be what heaven smells like. We looked around at all the treats and settled on a piece of milk chocolate with three different nuts – hazel nuts, pistachios and almonds. I was gonna take a picture, but like magic, it disappeared. Next time! 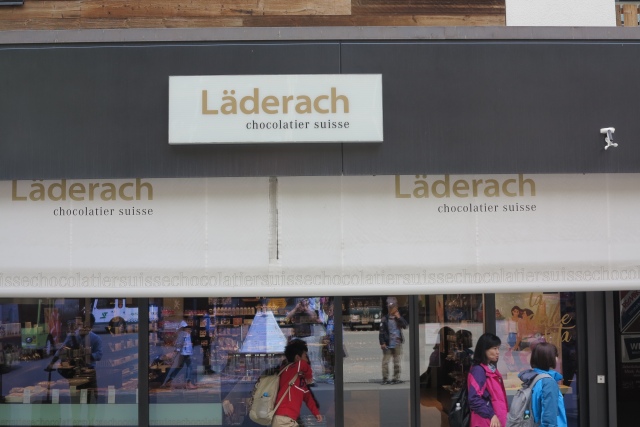 From there we took a quick walk over to the train station to scope out the platforms for tomorrow’s departure to St Moritz. The Glacier Express has its own platform, so it will be no problem finding it and boarding. And we have the always helpful Wolli in case we get lost. 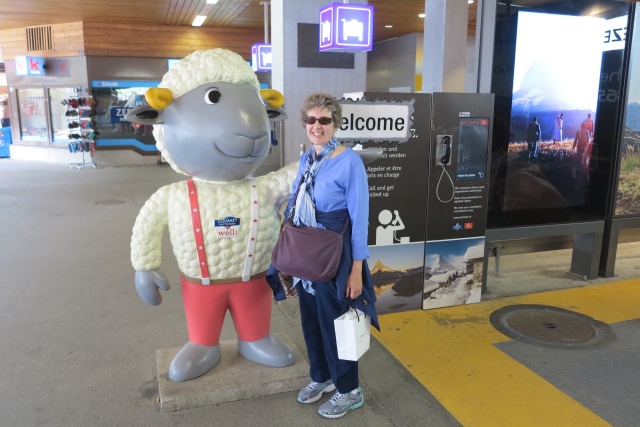 We were lucky enough to run into the Matterhorn’s little brother on the way back towards the hotel. He really wants to grow up big like his older brother and his favorite movie is “Rocky”. 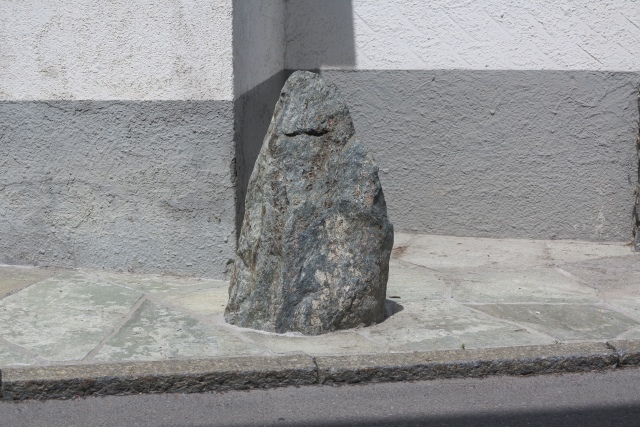 Matterhorn Jr hanging out in Zermatt

Not far from our hotel is one of the original buildings from the 1800’s. Noticed the thick granite roof. 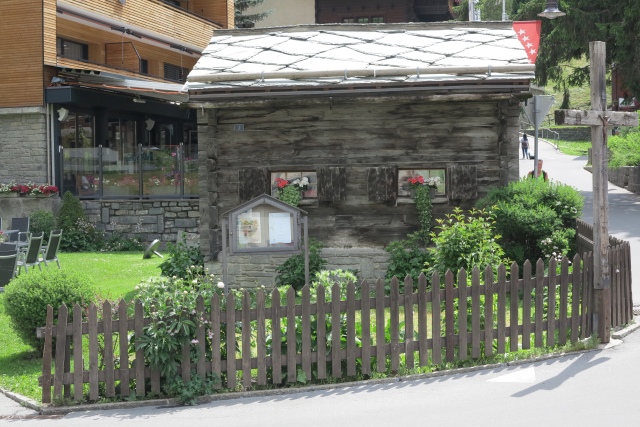 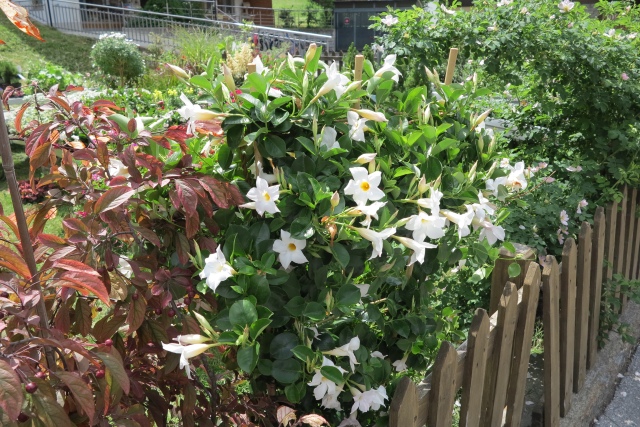 Back to the hotel afterwards to update the blog and relax before dinner. Hard to believe that the rain has held off while we were walking, but it did start once we were back in the room. In fact, it rained really hard for a while. 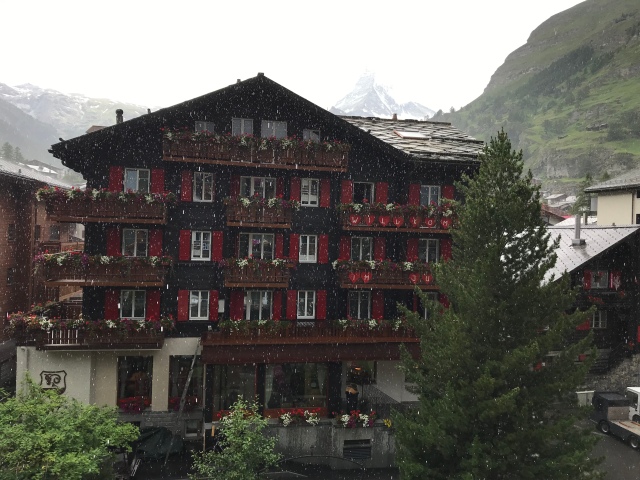 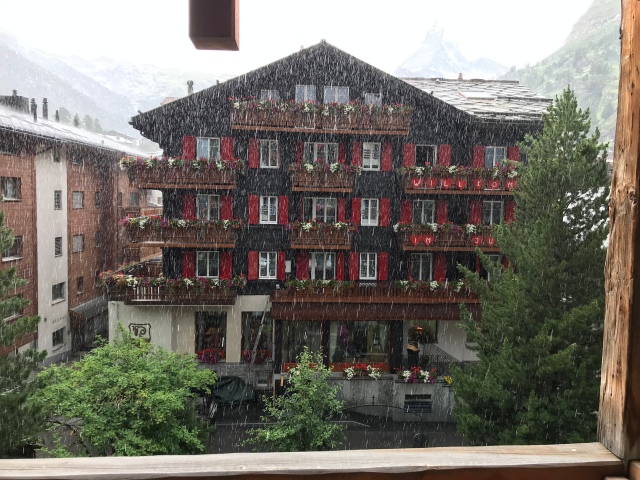 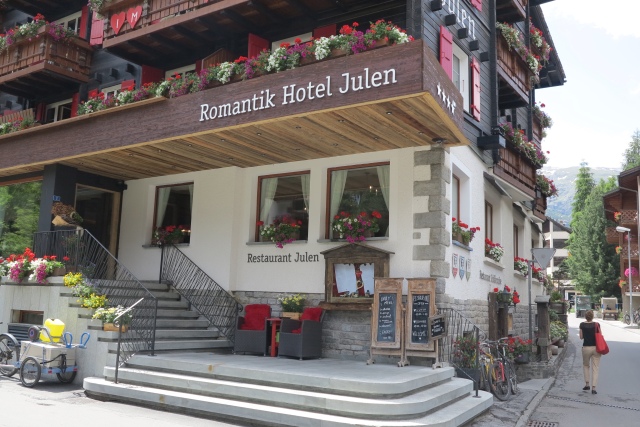 Dinner was very good, as was the wine and the service. The restaurant specializes in lamb dishes, so that’s what we chose. Sue had a lamb shank and I had a rack of lamb. Both were delicious and very filling.

We were ready to make a mad dash across the street after dinner, but the rain had briefly stopped. We walked back and relaxed in the hotel for the rest of the evening.

There really isn’t much in the way of nightlife aside from a few people hanging out at some of the bars. Even the lounges in the hotels have been quiet along the way. No matter though, I have been a bit tired after walking around during the day and I think the altitude might be playing into it too.

Tomorrow we move on once again.

Like Loading...
This entry was posted in Switzerland and tagged Sites, Small Towns, Zermatt. Bookmark the permalink.

4 Responses to Day 22 – Strolling through the streets of Zermatt