Hop On – Hop Off – Day 2 – Holyroodhouse Palace and New Town.

Today we’re off to the other end of the Royal Mile to see the other royal attraction – the Palace of Holyroodhouse. It is still used today as the Royal residence and as a tourist attraction when not in use.

We made our way over to the bus station to learn that the palace is closed today. It seems that Princess Anne is in town for a function and is using the palace. Oh darn! We’re still able to view the artwork in the Queen’s Gallery, but won’t be allowed on the palace grounds. 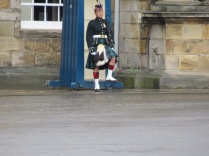 The bus we took over had live narration as we tooled around town. Anne talked quite a bit but we’re not exactly sure she followed the script. We would pass by before she would mention a place. We only caught up when the bus had to pause for a few moments while the driver sold tickets. Jeesh!!!

My Queen – Their Queen

Since the palace is closed, they gave us free souvenir booklets as keepsakes, which was nice. Arriving at the Queen’s Gallery, we found that the current exhibition is called ‘Butterflies’. The artist loved the metamorphous process and bugs and reptiles. It’s a good thing it was a free exhibit. Eye rolls and snickers were coming from more than just us.

Back to catch the bus we go. We rode the circuit until we reached the New Town area. The New Town section was built in the late 1700’s and was the place to be – think indoor plumbing.

We decided to divide and conquer. Sue was going to visit and tour ‘The Georgian House’ while I scoped out a pub for liquid refreshment and dinner when Sue returned.

Sue loved her visit to the Georgian House. Having read regency novels for years, it was right up her alley. There were guides at every area that would describe the room and answer questions. She made some instant friends!

In the meantime, I settled into ‘The Printing Press’ Pub and became acquainted with some Scottish gin. Move over gin & tonic with lime, today it was gin, tonic, fresh herbs and grapefruit. Very refreshing. I had two whilst waiting for Sue’s return.

The menu looked good, so we stayed on to grab a bite. I’d say it was a bit of an upgrade to normal pub food. I started with a smoked trout salad followed by a spiced duck leg and chips. Sue went with a warm goat cheese salad followed by gnocchi with roasted garlic and asparagus. I know what your thinking, those two poor souls are scrambling to eat properly, fear not, we are doing well.

Just two more times will I have to scale the stairs at Mount Warriston. Up tonight and down tomorrow.

The evil stairs of Warriston’s Close

Since we move on tomorrow, we decided to just relax for the evening.

Like Loading...
This entry was posted in Scotland and tagged Edinburgh, Sites, Tour, UNESCO. Bookmark the permalink.